Yesterday Anti-Jihad Denmark — the new Danish political alliance — held a demonstration in the North Jutland city of Aalborg. They were protesting the out-of-control immigrant gangs, particularly the jihad groups.

On this occasion the police kept the autonomer under control. Today’s Jyllands-Posten has the story (my translation):

When the extreme right-wing alliance Anti-Jihad Denmark Saturday held a demonstration in Aalborg the police decided to hold back twenty counter-demonstrators. 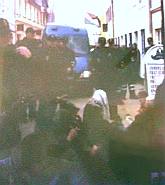 The police officer in charge, Poul Severinsen, announced that there was a small amount of trouble in the streets in advance of the legally announced demonstration. Therefore they chose to arrest two persons and issue an order afterwards for the arrest and restraint of an additional twenty anti-racists under the political laws.

“They remained seated here until the demonstration concluded. Then they were released again,” he said.

According to the North Jutland police, approximately fifty people met there to take part in the demonstration itself, to counteract “the onslaught of immigrant gangs”, as the organizers wrote. 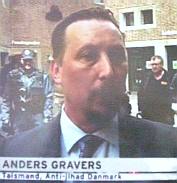 There’s also a video, featuring Anders Gravers, the chairman of SIAD. It’s all in Danish, but I can only read a little Danish — I can’t actually hear it — so our Viking readers can tell us in the comments what the announcer, the police spokesman, and Anders are saying.

In the video, however, you can see the anarchist counter-demonstrators — the autonomer, whose rough US equivalent would be the anti-globalists who heave trash cans through the windows of Starbucks, etc. — sitting down under a tight police cordon, unable to attack the “racists”.

I talked to Anders Gravers on the phone this morning, and he said the media reports are not entirely accurate.

The media said twenty, but forty anarchists were arrested at our demonstration. As for our people, some media say there were 150, but we would say around 75. This includes the Anti-Jihad demonstrators and also some other people who stopped and watched.

The anarchists were driving newly rented vans. It makes me wonder who pays for that.

There was no violence against us, just the “normal” kind — that is, attacking the police!

In the video, the girl in the window giving us the finger is an immigrant… I just heard that.

They called us extreme right wing, and we complained about it. We are not right wing, left wing or “middlewing” — we are for Denmark and for the cause of Denmark.

All in all, it was a great success, and then we had a fantastic party in the evening where I grilled one of our own pigs over a bonfire.

I wish I could have been there!

Update: Thanks to Mikael for correcting my translation of Poul Severinsen’s title, indsatsleder, to “officer in charge”.

4 thoughts on “Keeping the Autonomer in Check”