The Baron has been manfully holding down the fort these last few weeks, as I wandered into Limbo and then managed to find my way out again.

It is good to be back in the light.

This happens every May since my daughter died in 2003. I thought it would get easier as time eroded the edges of my grief. But this year was the worst, even though logically it should be easier. She finally has a headstone, and they attached a small vase for flowers. This time I was able to dig up some lily-of-the-valley from behind the large pine tree where it has grown since we first moved here. It was her favorite flower, so I packed soil around some of the roots of plants still in bloom and carried them to her. I put some freesia bulbs underneath the soil int the vase, hoping they will begin to emerge as the lilies die off.

I still haven’t figured out why the trip to Limbo was so dark and so long. In looking back on our posts, I can see mine trail off as we came into May. Life became a grey slow motion film…even as the Spring flowers began to take hold. The rhododendrons were lovely, but beauty was painful and to be avoided.

Grief is a mysterious process. It has all the ups and downs of a roller coaster, or a child learning to walk. 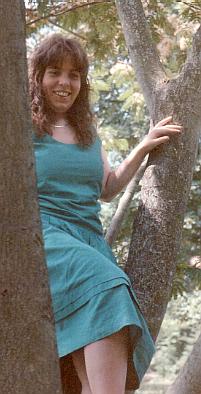 I began seeing young women going about their daily lives – putting groceries in the car, standing in line at Starbucks waiting to order their lattes, walking in front of me talking on their cell phones. How can there be so many of these women with long brown hair, a confident stride, or a fleeting smile that resembles Shelagh’s? Each almost-encounter leaves me breathless for a moment; I sit on the nearest bench waiting for my solar plexus to recover from what feels like an existential fist. A merciless fist.

If you’ve ever read Michael Connelly’s police novels, you know how dark they are. His main character, a loner detective named Bosch, finds out he has a child, a young daughter, from a relationship of several years ago. Connelly’s descriptions of this man’s feelings are spare and telling. When someone asks him how it feels to be a father, he replies, “it is like someone holding a gun to your head.” I know what he means: when you become a parent the world feels less safe; risks that were okay for you to encounter are definitely not all right for your child. Yes, indeed. Parenthood is a gun aimed right at your heart. The safety is off and the gun is cocked.
– – – – – – – – – –
So May 8th has come and gone for the fifth time now. The cemetery was as pretty as it was that first May 8th, when we arrived there to bury Shelagh. Long rolling swathes of green grass neatly trimmed, with dogwoods blooming at the edges of the woods, and copses of evergreens scattered through the cemetery. As we walked to her grave, I thought how fortunate it was we could not see the future. Decades ago, when the Baron was a landscape artist, he used to paint here. There is something timeless in mortality. And yes, I know that sentence is a contradiction, but so is death.

We, Shelagh’s faithful remnant, gathered by her burial place to talk about our memories of the funny, wicked person who was my daughter. Having forgotten to bring the Book of Common Prayer, devotions went unmentioned. Just as well… they have become a background hymn, played in a minor key, to the march of days that carry me further and further from the real, living, breathing and spirited girl who was my only daughter.

And then May 9th arrived as usual — I never believe it will. The sun came up, the coffee was made and gratefully consumed, and I arose as though I had moved past a physical barrier and returned to the land of the living.

It is truly good to be back. The sword I dropped at the gates of Limbo was waiting for me on the other side when I returned. And meanwhile, the Baron kept Gates of Vienna standing athwart dhimmification as he has done these last few years.

That is why I call him Saint Baron. Every time I fall down that black well of unbearable grieving, he waits patiently for me to return. He hopes for me, he has faith that I will make it back. It is truly a wonderful and mysterious thing to be loved.

But I don’t need to tell you what you already know: love triumphs over death every time.

15 thoughts on “Love Triumphs Over Death”