An Israeli doctor, responding to my post about Kassam rocket attacks on Sderot, recently sent us this email:

I am writing to you from Jerusalem, Israel.

I have a suggestion how to impress upon the readers of your blogs the essence of the complete insanity of the Israeli defense policy. Compare the distances from one point to another in two different reference systems.

In other words: take a map showing the distance from, for example, Gaza City or any population center in Gaza, to the City of Sderot.

Then take a map of where you live, with identical distances. Let’s say, for example, what if Brooklyn, New York was receiving twenty five Kassam missiles today from New Jersey, just across the Hudson River. How long would it take for the local police and Army to occupy and neutralize the attackers? Would the residents of Brooklyn resign themselves to receiving over three thousand missiles in the last year or two?

When the Arab terrorists in Bethlehem were shooting bullets at the Gilo section of Jerusalem two years ago or so, we could hear the small arms exchanges from our home. Only when the Army went in and “cleaned out” the terrorists, did “peace” return to Gilo.

The doctor has a good point. Israel is a small country, but it is also excruciatingly narrow. Go over to the Hatikvah site and scroll down to see the map — you can see how close the major population centers of Israel are to its borders. The Jewish state always has deadly enemies right next to its heart.

This map shows the situation in Sderot:

The primitive Kassam 1 rocket was unable to reach all the way from Beit Hanoun to Sderot, so the Palestinian entrepreneurs went to work and created the Kassam 2, which brought the town into range. Just imagine what would happen if the mujahideen in Gaza managed to obtain Katyushas from their cousins in Hizbullah.

So, taking the good doctor’s advice, I’m going to lay the same template over the landscape here in the USA.

And rather than tackle Brooklyn, Chicago, or L.A., I’m going to follow the time-honored dictum and write what I know.

Our local jihad scenario is set in the Piedmont area of Virginia, in the foothills of the Blue Ridge in Albemarle County. Let’s imagine that an alliance of halal hippies, horsy folks, and rednecks from the hollows near Afton and Mint Springs forms a group called the Western Albemarle Resistance Movement (WARM) to protest the high-handed rule of those snotty city folks in Charlottesville. The armed wing of this alliance then launches a series of guerilla attacks from the west into the outskirts of Charlottesville. After a cease-fire brokered by the UN, a “peace process” begins, with negotiations aimed at establishing a separate, sovereign country in Western Albemarle.

Unfortunately, the talks break down after the WARM delegation stalks out of the meeting, complaining angrily about “those Charlottesville apes and pigs”, and referring to the western suburbs controlled by the city as “Occupied Albermarle”.

Repeated suicide-bomber attacks into the fringes of Charlottesville cause the city authorities to build a high fence just beyond the Boar’s Head Inn to keep the jihadis out. Frustrated by their inability to attack their hated C-ville enemies, WARM imports Hamas technical advisors from Loudon County via Skyline Drive, who are able to design two crude homemade rockets, the Jouett 1 and the Jouett 2. The Jouett 1 has a range of 3 kilometers, while the more advanced Jouett 2 can reach a limit of 9 kilometers.

The militants of WARM have set up a rocket-launching site on the railroad bridge over US 250 in downtown Ivy. The map below shows the ranges available to them (pink for the Jouett 1, orange for the Jouett 2, and yellow for Katyushas, if they had any). 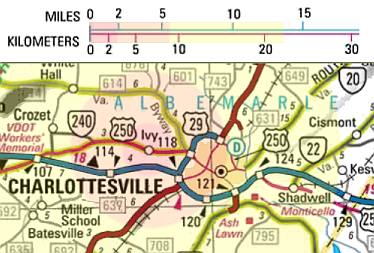 As you can see, they can only take out Farmington and its environs with the Jouett 1, but more than half of the city of Charlottesville lies within range of the Jouett 2. Heck, if they could somehow make contact with their Hizbullah brothers-in-jihad and smuggle in Katyushas, they could drop the crystal chandelier into the middle of the great dining table at the Keswick Country Club!
– – – – – – – – – – 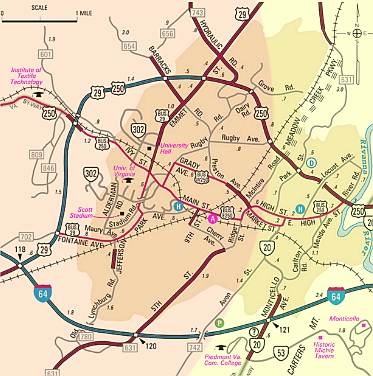 Observatory Mountain blocks line-of-sight for most targets in town, but with enough infiltrators among the clerical and services staff at UVA, they could correct the range and hit a variety of high-value targets. 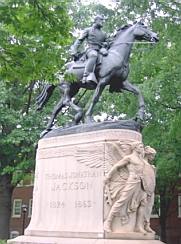 Court Square is at the edge of their range, so the statue of Stonewall Jackson would be difficult to topple, but they could level the Amtrak Station and stop rail traffic going northeast and southeast out of the city. Collapsing the bridge over Emmet Street at the bypass would throw the entire area into gridlock. A Jouett 2 dropped into Barracks Road Shopping Center during, say, the last Saturday before Christmas would cause numerous casualties and spread mass terror throughout the metropolitan area. Fashion Square Mall is also within reach, and hitting it at the same time would be immensely effective.

Imagine the roof of U-Hall collapsing during a Friday night basketball game, with the huge steel girders dropping onto the screaming spectators. During football season Scott Stadium would be another tempting target, given the possibility of the collateral damage when people are trampled to death as the crowds mob the exits. 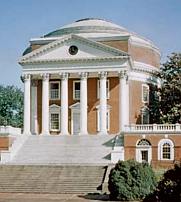 Finally, to sow destruction and terror at the symbolic heart of Charlottesville, bringing down the Rotunda onto the tourists would be the coup de grace. The flames over the treetops would be visible from the Downtown Mall, and the Lawn would be turned into a triage area for casualties, with fire engines and ambulances parked on the brick sidewalks. Hurriedly improvised basement shelters would become the place where students, tourists and townspeople meet.

If all this happened, do you think the City Council would heed the UN’s call for convening new talks with WARM in order to restart the “Roadmap for Peace”? Do you think the mayor would accept the former President of France as a neutral broker in the “peace” negotiations? Do you think the city would cede the Boar’s Head to the insurgents as a “gesture of good faith”?

How long do you think it would be before the City of Charlottesville dusted off its assets at the National Guard Armory and sent an armored column down 250 West, maybe with close aerial support from a Pegasus helicopter hastily outfitted with air-to-surface missiles?

How long would it be until the town of Ivy was turned into a field of smoldering rubble?

How long would it take the good folk of Charlottesville to teach those inbred, slope-browed, slack-jawed, gap-toothed, sister-marrying hillbillies a LESSON?

If you live close enough to Charlottesville to imagine the above scenario, then you’ve got a feel for the insanity that has been imposed on the state of Israel for the last forty years, and for the criminal irresponsibility of the Israeli government in allowing the situation to continue this way, year after year.

If you live in a different part of the country, and keep a blog, I invite you to make up your own Local Jihad scenario and then send me the link to the post.

We’re bringing it all back home.

13 thoughts on “All Jihad is Local”