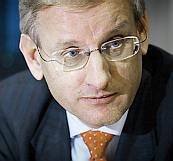 Carl Bildt is a former Prime Minister of Sweden and the current Foreign Minister in the coalition government led by the less-than-acceptably-leftist Moderate Party (Moderata samlingspartiet). All major political parties in Sweden are pretty leftist by American standards, but the bar is set much higher in Sweden, and by local standards Carl Bildt is a right-wing extremist. Add to this his outspoken views and his business associations with the corrupt Russian energy business, and Mr. Bildt can expect trouble.

In addition to everything else, he keeps a blog, and this is what has recently gotten him into hot water. According to KGS at Tundra Tabloids

It appears that Swedish politicians are not immune to the same kind of high handed investigations that Finnish bloggers have been subjected to. As of yet, I do not know what the offensive comment that appeared on Bildt’s blog might have been, I have my sources checking it out. Intimidation is one way of enforcing speech control even without the enforcement of an actual law.

Here’s KGS’ translation of an article from the online version of Helsingin Sanomat:

Police and the district attorney’s office may have to investigate Sweden’s foreign minister Carl Bildt’s blog or internet diary, which has had a complaint filed against it. According to a complainant, Bildt is guilty of incitement of a national group, when he did not remove a comment that clearly broke the law. Readers were able to read the highly anti-Palestinian comment for weeks [Oh, the Horror! — ed.].

Carl Bildt said in a new radio broadcast that he prevented readers from commenting further, but left the prior messages viewable. “I could remove them, but they would remain in the archive. That’s the problem. Getting rid of the messages would not have made a great difference”, Bildt said.

The Swedish Chancellor of Justice decided on Wednesday that Bildt’s website did not enjoy and special constitutional protection, nor does the matter belong to the attorney general’s office, but to the police and district attorney. The Stockholm police have already left the matter to the district attorney who will decide on whether to initiate an investigation.

Ah, yes, hets mot folkgrupp rears its ugly head again — “incitement against an ethnic group”, the old standby used by the European nanny state against those who commit thought crimes. It’s kind of like the “slandering the Soviet state” laws under the good ol’ USSR.

This investigation could possibly be the work of others who were already upset with his blogging as a foreign minister. On March 5 for example, he discusses the situation in the Middle East: “A Palestinian unity government will obviously not resolve all the problems or meet all the demands, but if the alternative is civil war, chaos … then it is obvious that this is what we must work for.”

He dissed the Palestinians — well, he should know that there are limits, even in Sweden.

Further details on Bildt’s travails can be found in the Turkish Daily News:

His detractors say Bildt should stick to traditional forums for communication.

“He can’t be just a private person when he talks about questions related to his field of work,” Gothenburg University journalism professor Kent Asp told Agence France-Presse. He said if Bildt wants to write a blog, he should limit his comments to those of a private nature.

On March 5 for example, he discusses the situation in the Middle East: “A Palestinian unity government will obviously not resolve all the problems or meet all the demands, but if the alternative is civil war, chaos … then it is obvious that this is what we must work for.”

A key member of the center-right government that ousted Social Democrats in September, Bildt insists “there is a thirst for information out there and I think we should use all the new information technologies to be more open and accessible than was the case in the past.”

“Members of the government have a political mandate and everything they do therefore takes on a political dimension … A member of the government is not just any ‘chatter,’“ a former newspaper editor, Bertil Torekull, wrote in a opinion piece published in Sweden’s largest morning daily, Dagens Nyheter.

“What is said in parliament is obviously of prime importance but regrettably it’s not very often reported in the media,” he told AFP, adding on his blog that the Web is part of “the new Europe of freedoms.”

Peter Wolodarski, an editorialist at Dagens Nyheter, takes Bildt’s side in the debate, defending his blog entries as “a welcome complement to the interviews and official commissions, not a substitute.” Meanwhile, Bildt’s musings remain hugely popular among the Swedish public. The blog has had almost 400,000 visitors and hundreds of comments posted by readers since its launch.

The “new Europe of freedoms” seems to me to be a lot like the old Europe of jackboots, censorship, and the secret police.

Next up: France. I’ll blog on the situation there when I have time.

5 thoughts on “The Finlandization of Carl Bildt”