We have often referred to Multiculturalism as a modern secular relgion. One of our readers detected another one — the worship of science — and sent us his essay on the topic.

The Cult of Science and Fire-Worship
by Dimitri K.

For those who lived under communist rule — like the author of this piece — it is obvious that science played the central role in their ideology. Starting with Marx, communists claimed that their ideology was based completely upon rational scientific calculation, as opposed to traditional faith. They claimed that science can account for not only the material world, but also the world of ideas and social behavior. That explains why communists always paid great attention to economics and sociology. The failure of those pseudo-scientific disciplines could itself be a topic for a paper. However, here I am only discussing one interesting feature of the scientific cult — its close relation to fire-worship. 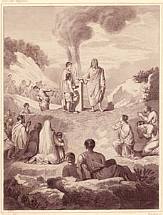 Fire was undoubtedly the first and the most important scientific discovery in the history of the mankind. By learning to use fire, people gained a decisive advantage over all other species. Fire made it possible for people to populate territories with cold climate and use a wider range of nutrients. I cannot imagine any possible discovery which would influence the life of modern people to the same extent as fire influenced the life of our ancestors. Hence, fire-worship at that time was equivalent to the belief in the power of science.

The relation of science and fire is especially obvious from the documentary films about science. There, scientists are always shown with something related to fire. It could be a laser, a faraway star or galaxy, an atomic reactor, a starting rocket, or at least twinkling lights on the instrument board. Earlier, it used to be a blast-furnace or a steam-engine. I wonder if the current assault on smoking is driven by the desire to exterminate the competitors, namely the non-scientific fire users.
– – – – – – – – – –
During the medieval period of the Dark Ages people probably did not believe in science very much. However, as the instrumentation and means of production became more and more complicated and science started to play an important role in European societies, the worship of science reappeared. Not surprisingly, the name of that historical period is the Enlightenment. The means for propagandizing the science cult is education; those who do not want to educate themselves about science are usually called “dark” people.

Undoubtedly, the Global Warming Catastrophe is closely related to science. It was predicted by scientists and can be avoided only by scientific means. With Global Warming, the religion of science has obtained its Apocalypse. But what is the reason for that terrible punishment? It is the unwise burning of fuels, burning by rough uneducated people who are not entitled to use the fire. It is the desecration of fire by the mankind. Scientists aloner are entitled to burn fire and distribute the power of fire to the people, but only in the amounts they consider sufficient. Clearly, they cannot and do not want to prohibit fire, because the fire is their power, but they want to be the only ones in the control of the fire. By the way, the accusation that the Bush administration has the desire to control Mid-Eastern oil is a typical projection of one’s aggression on the enemy.

In the light of the above piece, what else could be expected from the scientific fire worshippers? Probably, the prohibition of matches, grills and fireplaces as unsafe, restrictions on fireworks, and of course the prohibition of firearms. Later one may expect limitations on the use of electric power and natural gas, as well as recommendations to avoid cooking and frying. The prohibition of all combustive liquids, including alcohol. Finally, any unauthorized use of fire will be prohibited.

And Science will prevail.

29 thoughts on “The Cult of Science and Fire-Worship”