The Future Baron Bodissey had the misfortune to be born on Earth Day, so his annual family celebration always coincides with the Transcendent Gaia Green Moonbat Utopia Festival.

Yesterday was no exception. We went down to Williamsburg and took the future Baron out for his birthday dinner. Afterwards, while walking around the campus, we happened upon “Freetown”, a tent village set up in the Sunken Gardens behind the Wren Building. 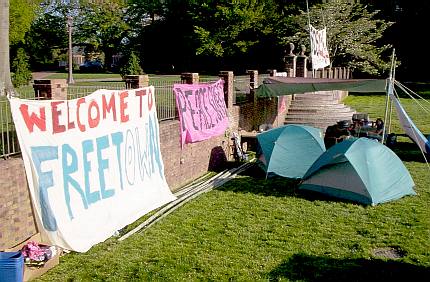 The people in Freetown were protesting… Well, they were protesting something; we’re just not quite sure what. One of the banners proclaimed a “Peace Surge” — good idea, that. Why didn’t I think of it?

The whole thing was being sponsored by that revenant dinosaur of the 1960s, the SDS (Students for a Democratic Society). Their banner proclaimed a “Middle East Convention” for April 20-22, but the agenda was not clear. Presumably they were imagining a world with no religion, living for today. And maybe they were Visualizing Industrial Collapse while they were at it.

Considering the significance of the day, attendance was sparse. There were at most ten people sitting around in the tents and the surrounding area. Frisbees were flying and we heard the sound of the Grateful Dead coming from somewhere. Time warp!

The future Baron is acquainted with some of the members of the William and Mary chapter of SDS. He says that they were raising money by panhandling down on Dog Street, i.e. the tourist zone. The pretext for their appeals was that the money was to be spent to “help the homeless”, but it turned out that they were simply plowing the money back into their activity fund. 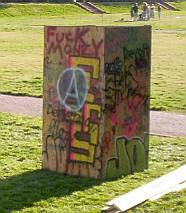 My favorite display was the large rectangular pasteboard plinth shown at right, with its pithy sentimental slogan: “F**k money.”

I’ll bet it warms the hearts of Mom and Dad when they read that one! F**k the tuition payments that keep us living in idle luxury here! F**k the money that bought these tents and my brand new Birkenstocks! F**k the tax money paid by the citizens of the Commonwealth to maintain this oppressive outpost of the Patriarchy!

Down with the bourgeois preoccupation with capitalistic symbols!

We need a word for the permanently demonstrating radicals and socialists, the legion of perpetually offended punks. In Denmark they call them autonomer, such as the youths who lived in the Ungdomshuset in Nørrebro until early March. They are the “autonomous ones” — subsidized by the state, of course.

To be an autonome requires:

If you meet the above requirements, we’ve got a tent ready for you in Freetown! Pick up a can of spray paint and get ready to panhandle! We’re the Autonomer of William and Mary!

Some things never change. On campuses across this great land of ours, it’s always 1968.

6 thoughts on “The Autonomer of William and Mary”