The National Council of Resistance in Iran announced that schools are closed across Iran:

[t]eachers went on strike in various cites throughout the country, according to the information received from the resistance sources in Iran.

Adnkronosinternational reports that the schools remain closed, in protest against the arrests of many teachers:

Most schools in northwestern Iran remained closed on Monday due to a teachers’ strike to protest against the arrest of dozens of their colleagues in the past few days. The two-day protest which started Sunday was almost unanimous in the northwestern Kurdish cities of Sagghez, Marivan, Sanandaj and Bukan. “If our colleagues will not be freed, schools will probably remain closed in the coming days,” said Davood Rouhani, a spokesman for teachers in Sanandaj.

Iranian teachers have been staging protests across the country for the past 11 weeks and many leaders of teachers’ unions have been arrested. Teachers are demanding pay hikes — their salaries have not been raised for years — and protesting against the government’s decision to fire teachers who are not ‘loyal’ to authorities.

About one thousand teachers believed to be too secular or belonging to ethnic minorities have been fired or induced to retire early in the past few weeks.

So what’s a poor theocracy to do when it can’t get the teachers back in line? Simple: start the annual summer crackdown on women a little early this year:

Iran has issued more than a thousand warnings and arrested dozens in a new drive aimed at forcing women whose dress is deemed inappropriate to adhere to Islamic dress rules, officials said Sunday.

The nationwide drive — an annual pre-summer crackdown given greater prominence this year — is aimed primarily at women whose coats are seen as too tight, trousers excessively short or hijabs (headscarves) overly loose.

It foresees handing out warnings and guidance to women found to have infringed its dress code in public. Those who show resistance to change can be arrested and then be the subject of legal proceedings.

“Since the plan started at 10:00 am on Saturday, 1,347 women have been warned and given Islamic guidance,” the head of information at Tehran city’s police force, Mehdi Ahmadi, told AFP.

“There were 170 arrests. Of these, 58 were released after making a written commitment and rectifying their appearance. The cases of the rest, who already had a record, were handed over to the judiciary,” he said.

The programme was aimed at “improving the security of society with an approach of moral security,” he added.

“Its duration depends on when society feels that there are no longer signs of short trousers, tight mantos (coats), tight clothing and very skimpy hijabs.”

The authorities have argued the “bad hijab” drive is aimed at encouraging women to dress in line with Islamic dress code and it appeared the emphasis is more on handing out warnings than detaining offenders.

An editorial in the hardline daily Kayhan said that police were right to ignore the wishes of those who favoured a more softly-softly approach.

“Do not worry, the people support you (the police). The man who sees the robbers of his family’s chastity laughing in his face, the family that despairs over the drug addiction of their child… they are with you,” it said.

Women in Iran are obliged by law to wear the hijab and a full length overcoat that covers all bodily contours. Visiting foreigners and religious minorities are not exempted.

Some man in the culture committee of the Iranian parliament claimed that these women were obviously a danger to men:

“The current situation is shameful for an Islamic government. A man who sees these models on the streets will pay no attention to his wife at home, destroying the foundation of the family,” he warned.

What is it about Islamic women that they have such power over the men? Or is it that the men have so little self-control they have to make their women dress in those horribly hot, portable phone booths in order to control their own insatiable appetites?

Time to grow up, guys.

There were lots of pictures of the shrouding process.

Here are a few:

These first two images allow us to see the shame involved – not to mention the fear of being in an Iranian jail. If you click here, you’ll see a couple of others from this set. The whole thing looks like a bad dream, especially those women hijab enforcers. It is hard to imagine how they can bully so many women. These are definitely the personification of mean girls masquerading as crows. 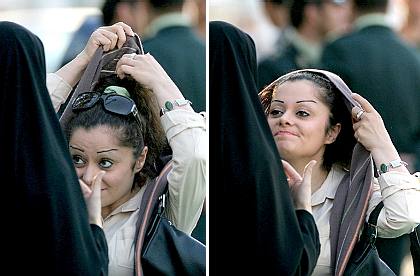 These pictures of a spunky girl were particularly appealing.

– – – – – – – – – –
There are another nineteen pictures in the whole grouping that accompanies this second set. Some of them are haunting.

Unless you read Farsi, you’ll have to guess what’s being said. Looking at some of the photos, though, it is obvious that not all of the men agree with this edict. You will notice that any pictures with a full frontal shot of the Morality Police lets you see their badges. These are a bunch of mean girls dressed in black…don’t you agree they look like crows? Sister Mary Agnes was positively benign in comparison.

My theory is that the big hullabaloo regarding women’s modesty is just a con job to draw attention away from that unsolvable eleven-week old strike the teachers have staged.

Hat tip: The Spirit of Man. This blogger describes himself as a Canada based Pro-America, Pro-Israel Iranian neo-conservative, seeking regime change in Iran! Winston is also a supporter of the Global War on Terrorism & President Bush’s policies in the middle-east.

9 thoughts on “The Clever Mullahs and Their Crows”