Last Tuesday I took the train from Århus to København in order to catch my flight back to the States. The trip takes a little over three hours, and runs through some very beautiful East Jutland countryside. I alternated my time between reading and watching out the window.

When the train stopped in Vejle, a young man and his little girl got on and sat down next to me. The train was crowded, and there was only one seat free for the two of them, so the little girl sat (and stood) on her father’s lap. She was about three, and kept peeking at me under her father’s arm and smiling.

They were speaking a language that I didn’t recognize; all I knew was that it wasn’t Danish. Then, when the conductor came, the man asked her in English about which platform to look for when changing trains in København for the airport.

Since the conductor was unsure, and I knew the answer — I had prepped for the journey — I told him to move to platform five. He thanked me, and we struck up a brief conversation. He was from the Czech Republic, and was going back to his homeland for a visit. 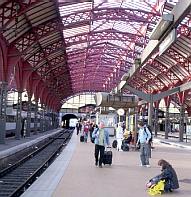 Soon after that a pair of adjacent seats became available in the next car, and I lost track of the young Czech and his daughter. However, after changing trains at the main København station, I met him again, and the three of us sat together all the way to the airport.

He told me a little bit about himself. His wife was Finnish, he said, and they lived together in Jutland. He was giving her a bit of a break by taking their daughter to visit her grandparents in the Czech Republic for the first time.

He told me that he and his family were tentatively planning a move to Scotland so that his wife could study there.

“She wants to improve her English,” he said, “so that our daughter can grow up with a third language.”

“Doesn’t she speak any Danish?” I asked him.

“Oh, a little; a word here and there. But my wife and I speak English to each other at home, because she doesn’t speak any Czech, and I don’t speak any Finnish. We want her” — indicating his little girl — “to learn good English.”

I asked him about where he came from, whether he was from Bohemia or Moravia. He said his family was from Moravia, to the east of Brno, close to the Slovakian border. “We speak Czech, but with a lot of Slovakian words.”

“I remember 1968 very well,” I told him. “I was a teenager living in England, and the news of the ‘Prague Spring’ was all over the newspapers and the television. Then the Soviet tanks came in, and it was horrible.

“So when 1989 happened, I was paying close attention. It was very exciting; it was such a…” I groped for a word.

“A relief?” he suggested.

We talked about the pervasive corruption in the countries of the former Soviet bloc. I noted that the party that currently holds power in Hungary — the reconstituted Communist party — wass notorious for its blatant corruption. I asked him if they had the same problem in the Czech Republic.

“Yes,” he said, “there is quite a bit of corruption. I think the reason for it is that the churches were persecuted under the communists. They received no money, and could not run their schools. The people lost the habit of religion.

“Now we are free, and we can choose to have religion or not. People are moving back to the church, but it takes a long time. I think the corruption happens because people don’t have a sense of God to tell them what is right and what is wrong.”

At that point the train reached the airport, and we said our farewells as we stepped out onto the platform. He headed off to catch a plane to Prague, and I boarded a plane to Amsterdam, with a connecting flight to the Great Satan.

For the rest of the day, every time I pulled out my passport — to check in, to go through security, to get my boarding cards, and so on — I looked at it and thought about the man from the Czech Republic and his Finnish wife and his little girl who was going to learn good English.

That little blue book in my hand was something very precious. Billions of people all over the world would like to have one, to be able to step off a plane, show it to the immigration officer, and then walk out into the vast open spaces of America. I am a privileged human being, and I never forget that.

But that little blue book is not something that’s guaranteed. We would be ill-advised to take it for granted. It is, after all, just a few pages of funny-colored paper stapled together.

What makes it important is something we could lose very easily.

If we continue on our present path, pursuing orthodox multiculturalism and worshipping at the altar of internationalism, that little blue book could become completely worthless.

If we insist on disregarding our own borders, and view our own language and culture as worthless, and denigrate our own people, then we will lose what makes the United States a beacon for the rest of the world.

It is a pearl beyond price, and we seem all too eager to cast it onto the dungheap.

8 thoughts on “English as a Third Language”