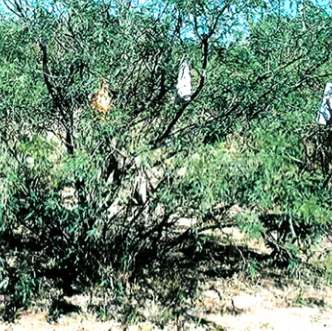 What does that picture look like to you? Blonde Sagacity says it’s a Rape Tree.

Those are women’s underwear, hung as trophies by the guides — the Coyotes — who routinely rape the Meixcan women they “help” to the U.S. border:

It seems that when woman employ the “guides” that take you across the Mexican -U.S. border (called “Coyotes”), one thing these women must endure is the routine practice of being raped and as a visual reminder to all that come after —her bloodstains are left in the dirt and her panties are hung from the branches of a tree.

“This is the picture that pro-immigration advocates don’t want you to see….

It is time the American people put a stop to the travesty of our open borders. It is time to understand that “open borders” means they are open to every kind of evil, including gang rape and human trafficking.

For any decent, law-abiding American, to see a rape tree is to gaze upon the face of the enemy of civilization. To see the blood-stained ground beneath them is to behold the faces of their victims…

“Self-respecting feminist”? That’s become an oxymoron. The so-called leaders — ah hell, let’s call them what they are: leaderettes — are way too concerned with making sure that every undergraduate in America has been subjected to the Vagina Monologues to care about poor, dumb foreigners getting themselves raped. I mean, how boring and predictable can you be? Feminists have to explore the inner self, they have to re-birth themselves (no, I’m not making this stuff up).

Never, ever hold your breath waiting for American feminists to show up for anything that is not in their immediate self-interest.

As Blonde Sagacity says, this practice of the one of the thousands of reasons the Minutemen came into existence. It’s a darn shame that President Bush and his administration — as John Bolton recently put it in another context — are so “limp-wristed” about our sovereignty.

You have daughters, President Bush. Think about it.

Yes, yes… I know it’s old news. But it was new to me. And rape is ever ancient, ever new. Each one is a shattered individual. Each one adds to the evil in the world.

You may already know about these abundant trees, but I didn’t. And I presume there are others like me who didn’t know either. For example, was this horror ever on the front page of the New York Times for months? Directly below the Abu Ghraib pictures, right? And they ran the stories repeatedly, didn’t they, demanding that Congress do something to stop this horror?

12 thoughts on “The Price They Pay for Survival”