A Gates of Vienna reader sent this review for consideration as a post.

The book — speculative, to say the least — contemplates a possible landfall if the swift current of dhimmitude continues to carry us down-river. 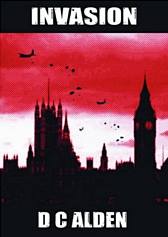 As a fan of speculative novels and techno-thrillers, I was both pleasantly surprised and wary of Invasion, the ‘explosive new novel’ from DC Alden that ‘charts the fall of Europe and the rise of a powerful new Islamic state.’ Could this be another sop to liberal elitism? After all, a casual glance at the back cover informs us that Britain is initially attacked by teams of Islamic fighters who cause mayhem across the country, so we know immediately that the ‘bad guys’ are Muslim. But is Invasion merely a book that plays on the fears of many while at the same time assuaging those fears with an arrogant assuredness that a Muslim takeover of Europe is impossible?

The answer is no. From the very first page, Invasion leaps forward into the twenty-second century, where the walled city of London basks in a Mediterranean climate. Britain is no more, the author tells us, and this depiction of England slaving under the yoke of Islamic rule is unnerving. The indigenous population are forced to live in slums outside the city while occupying only menial positions in a bustling London that boasts marbled mosques and landscaped memorial gardens built to commemorate the end of western civilisation. The prologue focuses on two men who are on a mission, one that will have a devastating effect on the Islamic rulers of this Arabian outpost.

It’s at this point that the novel jumps back to present day, albeit a few years into the future. Harry Beecham, the British Prime Minister, struggles with a country whose economy is failing and whose future is now aligned with Europe rather than the US. America is politically isolated, banished from the Middle East after a new Islamic power rises to unite Iraq, Iran, Syria, Turkey and the North African states.

Next on its agenda of conquest is Europe, already floundering in a sea of rampant immigration. It is from these immigrants that the shock troops of Arabia hide, waiting to receive the ‘go’ order.

– – – – – – – – – –
When the order comes, things are timed precisely. Simultaneously, power is cut across London and passenger planes are shot down over the city. Meanwhile, a truck bomb decimates Whitehall and armed gangs occupy strategic buildings. By the time night falls, the combined armies of the Arabian forces have moved decisively against Europe.

The premise of the book is a little far-fetched in supposing that Sunni and Shia countries could ever unite to create a combined Islamic state. But given that premise, the author paints a convincing picture of Muslim Brotherhood: transcending sectarian violence to unite the Middle East under a powerful and universally revered ruler: the Caliph of old whose aim is the domination of Europe by Islam.

That Europe falls so easily somehow rings true in this story, however implausible it may seem today. The author’s descriptions of a conquered Britain strike disturbing chords. As remnants of the British Army flee north to Scotland, the vacuum they leave is filled by Arabian troops; the ethnic populations of Britain’s cities throng the streets in welcome. It is under this new regime that events sound the tones of a requiem. ‘Potential troublemakers for example the surviving police and army personnel who failed to flee north are rounded up. Their tragic fate and final destination are intriguing elements in the plot.

As for England’s prison population? Well, their destiny is truly a ghastly one, although one has some sympathy for the motives of their Arabian captors.

Invasion reads like a thriller in the Clancy/McNab mould. But the sub-text is obviously a critique of Britain’s — and by extension Europe’s — failed immigration policies, the inability to stem a rising tide of Islamic fundamentalism and the cringing subservience to political correctness that infects the culture of Europe.

Given the possible risks, not many authors are willing to tackle this subject. Any number of unsympathetic depictions of Islam, fictional or not, have provoked threats and violent outbursts from Muslim communities. Even with that Ignoring the hazards, Alden has produced a thought-provoking speculative thriller in which Islam and the west enter into the direct conflict that so many people fear the future may hold.

This is a fast-paced narrative that chills the blood as one contemplates the shadow of Islam falling across Europe.

Here is the UK Amazon link. And here is a typical review – both typical of the other enthusiastic readers, and typically British, which we Yanks find so cute:

A thumping good read — I enjoyed it immensely!

An ingenious plot, brilliantly crafted and superbly written. Just hope the author is not foretelling the future!

We shall be hearing a great deal more of D.C. Alden. (jolly good!)…

except…well…I think this reviewer is having us on: he’s from Ontario.

Back at the ranch, The US Amazon link says this book is “currently not available.” Nor does it say when they expect it to bein stock. I suppose one might nudge them, or it may never become “available” here. Not that I’m paranoid or anything (come on, Wally Ballou, I can take it).

13 thoughts on “I Wonder What Fjordman Would Say?”