The title of this post is one commenter’s summation of Michael Yon’s latest news from Iraq.

It’s been awhile since we’ve heard from him and in passing, Yon explains why.

There is, as usual, lots of meat in this latest epistle of his, entitled “Meanwhile”…

One subject he covers is his relations with the military as an embed journalist:

With the odometer running over many embeds, Mellinger [that’s Command Sergeant Major Jeffrey Mellinger, the real deal in Iraq — D] has taken me about 4,000 miles (total) up and down Iraqi roads, visiting units from north to south, east to west, showing that the military truly opens their doors to writers who will stick it out. They don’t even have to like you: my fights with the Army are well-known, yet they continue to open their doors. There’s a lesson in there. I wrote that Iraq was in a civil war shortly after covering the first elections. I wrote about commanders who did poorly, and ISF units that couldn’t shoot straight, and I wrote about the veneer of victory in Afghanistan cracking under the weight of a poppy-fueled Taliban resurgence. Yet they still let me in.

It’s a reminder of why I am so proud of my country, despite our many problems. It’s also a caution about why we must stick with our people who have been mostly abandoned at war. I understand the position of the journalists. Especially the ones who get blown up or shot at fairly regularly, but the informed interest of ordinary Americans is critical to the outcome of this war. And the truth is that our soldiers in Iraq and Afghanistan, most of whom rarely (if ever) see a writer, are abandoned by default.

Read his whole post, including some sly but friendly remarks about the troops’ feelings re Geraldo Rivera. Also note that he carefully confirms what the WaPo has been saying about Walter Reed Hospital:

In Balad, we stopped at Anaconda, where many of our dead and wounded are lifted out. We accompanied a C-17 medevac flight straight to Landstuhl, Germany…I’ll have to write about that flight with the details the topic warrants, as time permits, but sufficient for this is that the care was outstanding. However, when the Washington Post recently exposed serious shortcomings on the stateside aspects of care, the reports seemed to confirm conversations I’ve had with some wounded veterans last year.

I’ve been following Mr. Yon with special interest — as many of you have — for several years… all the way back, back to the days of uncertain acceptance by the military, his bare bones existence as he established his creds with the troops, his broken down camera and the serious lack of night goggles when he went out after dark to accompany the troops on their missions. Americans must have responded generously since he first began his odyssey; his website is professional looking now. No more blogspot, and a much more aesthetically pleasing “skin” on his site. It’s good to know he doesn’t have to do everything himself anymore.

Yon has assumed a legendary, Ernie Pyle status by now and no doubt knows his words will frame the reality of these years of the initial American war of the 21st century. He will be read and remembered when the last soldier has left Iraq. In fact, if Life magazine still drew breath, he would be on their payroll as their photographer on the scene in OIF. When you think about it, the only reason Mr. Yon is not more prominent and well-known is that venues like Life have ceased to exist.

Click on the link above to his latest post. As usual, his pictures are superb. The particular image I’m using is on Yon’s post but it’s a military portrait of General Raymond Odierno (one doesn’t link to Yon’s images without express permission). 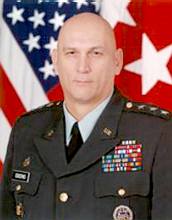 Just take awhile to count the ribbons on the man’s chest. Jeez Louise! And I wonder what neck size the General wears? Maybe an 18?

Odierno is a serious general who runs a huge portion of this war. Next time Odierno comes on the news, it can be good to stop and listen.

This is definitely the General from Central Casting.I wouldn’t want to get on his bad side; he looks as serious as a heart attack. In fact, I’d love to be there when he coolly dismembers some MSM “Iraq-is-a-quagmire” complainer at a news briefing. I’ll bet they’d only dis him once and the subsequent trauma would be seared (to coin a phrase) — absolutely seared, I tell you, into their memories.
– – – – – – – – – –
I also searched the available images of Command Sergeant Major Mellinger, but none of them compares to Yon’s work so I leave it to you to go to his site and see the CSM for yourself. That level stare at the camera…he looks like Jehovah on a bad day.

Oh, another thing. Yon says that reports of low troop morale are questionable. If you’ve read any of his essays in Afghanistan you know he doesn’t cover things up. Here he asserts:

…I watch morale very closely. More closely than all else. Low morale in a particular unit can be the result of poor leadership in that unit, or just not getting mail, for instance. But gauging morale is not a simple affair of asking a few soldiers. A person has to live with them across Iraq. Having done so, my opinion is that overall troop morale is good to high. (If their morale could be bottled, it would probably would sell like crack, then be outlawed.)

Thanks, Mr. Yon. For the words and blessedly, for your pictures — the gritty ones, the sorrowful, the quotidian shots of men in a land of war. We are fortunate that you are willing to be there.