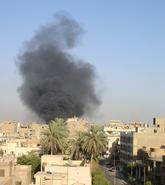 I don’t pretend to understand the practices of Islam or the differences in its various sects. But one thing that seems increasingly odd is the willingness of Shia pilgrims to permit their enemies to blow them up:

Hilla, 6 March (AKI) — Police said a double suicide bombing in the southern Iraqi town of Hilla on Tuesday killed up to 90 Shiite pilgrims heading for the holy city of Karbal for a memorial ceremony. The blasts occurred in the late afternoon local time when two bombers detonated their explosives belts in a crowd of pilgrims. The attack followed the deaths of at least seven pilgrims in car bombs in the capital and a further three in shooting in Latifiya, 30 kilometres south of Baghdad. Dozens of pilgrims were wounded in the attacks.

Earlier on Tuesday, a member of the outlawed Baath Party was killed by gunfire, south of Hilla, which lies 100 kilometres south of Baghdad, the Voices of Iraq independent news agency reported, citing unnamed police sources. The report did not give the dead man’s name.

Thousands of pilgrims are this week heading to Karbala — 70 km south of Baghdad on their way to Arbayeen, for the commemoration of the killing in battle of Imam Hussein, who is revered by Shiite Muslims as the successor to the Prophet Mohammed. The observance — one of the most solemn days in the Shiite religious calendar, falls on 10 March this year, at the end of the traditional 40-day mourning period following the anniversary of Hussein’s death, known as Ashura.

A roadside bomb struck a group of pilgrims walking along the Mohammed al-Qassim Highway in eastern Baghdad on Monday, killing at least three and wounding 10 others, according to Baghdad police. Others were shot and killed by gunmen in separate attacks in Baghdad, where many pilgrims are beginning the journey on foot from the capital to Karbala.

So that’s ninety three souls so far, and we still have until March 10th for the enemies of the Shi’ites to round up squads of suicide bombers or to lay out IEDs, etc., in order to send hundreds more to Paradise.

Yes, I realize the opposition believes their victims are headed to anywhere but Paradise. However, the Shi’ites would demur on that point, and besides, it’s not my point.

My point is this: while feelings run so high, and while the country is so unstable, why do the Shi’ites continue on their pilgrimages as though nothing will happen? Is it merely blind faith – and this behavior surely speaks to a lack of vision here – or is it determination to go on with life as usual?

This does not compute, at least on Western adding machines. To us, it seems willfully perverse. Perhaps a Shi’ite will drop by and explain this phenomenon in terms that accord with everyone’s hard-wired desire for survival. From here, it looks as though the need for these pilgrimages override the original wiring.

Advisory to commenters: please refrain from insulting these pilgrims or their faith. If you have something cogent to say, something that is actually part of furthering our understanding of this puzzle, you’re more than welcome to come aboard. In fact, you can go on at great length if you have lots of information on this phenomenon of walking oneself literally to death.

However, there will be no one-off insults or egregious comments about Islam or Muslims. These pilgrims are not terrorists. They may be blindly putting themselves in harm’s way, but that’s not terrorism.