UPDATE: Pajama Media notes that Cathy died at 2:05 p.m., Pacific Time. As the universe would have it, that’s precisely when I was writing the post below.

She had been on my mind for days and days, like an insistent tune, but I didn’t begin to write until Cathy was actually ready to leave.

Under her picture on PJM is a quotation from Ezekiel:

“Wherever this water comes the sea shall be made fresh. Along both banks of the river, fruit trees of every kind shall grow; their leaves shall not fade, nor their fruit fail.

And that, as best one can express it, is the imperishable Self that will comfort her survivors. 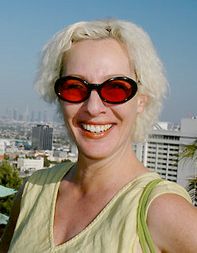 Kathy Seipp is dying. She may be gone even as I write these words to bid adieu to a fine writer, a good woman.

When she was diagnosed with lung cancer, she did not rail against the cosmos. She didn’t complain that because she had never smoked “it wasn’t fair.” For her, it simply was what it was: a likely death sentence, one she would deal with as best she could.

And now Death has arrived, and waits in the wings for her to breathe her last. This, the latest posting on her blog, is from her daughter:

As earlier mentioned in the comments section, my mother is in the hospital. The doctor says that right now they’re just making her comfortable. She’s sedated, with painkillers among other things. Lungs collapsed so right now we just want to make sure she has dignity and is not in pain. The doctor says she has a couple days left. I want to thank all her readers for reading this blog, her friends for supporting her who made up “Team Cathy.” Through you all, I learned what a true friend was. I’m at her bedside now, holding her hand. I tell her she has 292 comments on the latest blog post..her last but she just squeezes my hand. She was very happy with this blog. In honor of her, if you can…support the American Lung Cancer Society and or adopt stray dogs and cats from the pound. Those were her causes. Thank you all so much. Will keep everyone posted.

UPDATE: Thanks to everyone who posted. As of 7:45am this morning she is still breathing and pulsing but is passing peacefully.

[By the way, the comments have increased to well over 600 by now. Understandably, everyone wants to say goodbye. —D]

When I was a child in elementary school, I sang in the Gregorian choir our monsignor insisted on having as part of the curriculum. It didn’t matter much if you could actually carry a tune — what mattered was numbers. And since the good Monsignor was a Colonel in the Army Reserve, a Gregorian choir is what we had.

Twice weekly we practiced the timeless chant in preparation for the liturgies of the season. While the sonorous cadences of Palm Sunday made for good processional music, I was always fondest of Easter, for it had the most lilting and joyful melodies — and the loudest.

Whenever a member of the congregation died (and it was a large congregation) a group of us were called out of class to make the climb up to the choir loft to sing the Requiem Mass “for the soul of the departed.” As I stood there, perhaps chanting “Dies Irae”, I would look out over those attending the funeral and wonder idly who would be the next one to leave. Of those heads I could see, who had the shortest time left? [As you can tell, I was not the most devout of children.]
– – – – – – – – – –
That particular reflection stayed with me long after my years in the choir. Gathered in any large group, when things were slow — perhaps listening to a boring instructor — I would again wonder, “Who of us is the next one to go?”

When I joined the blogosphere, the same question eventually occurred to me as I perused the thoughts of those brave enough to put their words out there. Who would be the first to leave us? Cathy Seipp did not come to mind. Not at all. Not someone so vital.

And now her voice will be missed.

By the way, our beloved Gregorian choir director, a funny and gifted musician who had graduated from that very same school in 1941, still buzzes around the diocese, making CDs and raising money for her order, the Sisters of Saint Joseph.

But Sister Marie Therese is a story for the Neighborhood of God, not here — though she was the first one to tell me my gift was writing. When I asked her last year — she has email and a cell phone — to what she attributed her long life and creativity, she said that of course it was God’s will, but that she also thought it came from constantly giving away her “stuff.” On occasion, she emails me, “Want some ‘stuff’?”

That’s the hardest part of being among the survivors: figuring out what to do with all the stuff left behind

3 thoughts on “Gently, Gently, She Leaves Us”