One of the great iconic images of American impotence and humiliation — along with the helicopter lifting off from the roof of the embassy in Saigon in 1975, and the hostage-takers taunting the Great Satan in Tehran in 1979 — is the TV footage of an Army Ranger’s corpse being dragged through the streets of Mogadishu in 1992.

That abomination, that desecration, was almost too much to bear. I felt the same way then as I did about Iran in 1979: level the country, and then turn it into a parking lot.

But that’s not the way the United States conducts its foreign policy any more. The world’s pit bull insists on acting like a yappy little Chihuahua. Cut and run, then start a “peace process”. Engage in “dialog”. Send foreign aid.

Above all, don’t direct any overwhelming force against those who would mutilate, torture, and murder Americans.

And now it’s happening again in Mogadishu. But this time it’s not American corpses being dragged through the dust and flies. Today the victims are Ethiopian and Somali soldiers.

According to the story: 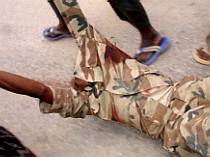 Insurgents dragged the corpses of two soldiers through the streets of the Somali capital and set the bodies on fire Wednesday after a fierce street battle killed at least seven people, witnesses and medical officials said.

An Associated Press photographer saw insurgents drag the bodies of one Ethiopian soldier and one Somali government soldier through the streets of northeastern Mogadishu and then set them on fire.

As one of the bodies was still burning, women wearing head scarves and long, loose dresses picked up stones and pounded it as a handful of young men looked on.

Somalia’s government began the operation at about midnight Tuesday at the former Defense Ministry headquarters and plans to move forces into other parts of the capital, said Mohamed Ali Nur, the country’s ambassador in neighboring Kenya.

The operation is meant to try to stop militants from firing rockets at government installations, he told the AP.

Nur denied that any Ethiopian troops were involved in the operation.

That’s not what the Shabelle Media Network (a Somali news operation) says. It has photos of the soldiers involved, and at least one is identified as Ethiopian:

The death toll of today’s violence in the Somalia capital Mogadishu rises to 20 people and wounds of more than 80 others some of them seriously, medical sources say late Wednesday.

Medical officials in Media hospital in south of Mogadishu confirmed that the number of wounded people has increased. “the number of injured civilians being brought to the hospital reached to more than 80, mostly they were hit by stray round bullets and shrapnel of the artillery shells,” one health official at the hospital said.

Nine of the dead people were belonging to the transitional federal government while crowds dragged and burnt two of the government soldiers in the streets of Mogadishu.

Masked men supposedly are supporters of the ousted Islamists fought with the government troops backed by the Ethiopian forces in three locations of south and northern Mogadishu where the rival sides engaged in fierce clashes.

Today’s gun battles which were the worst since the Ethiopian backed transitional government arrived in the capital forced many villagers to flee their homes in fear of exchanging mortar and rocket shells.

Self organized local militia men could be seen in the streets of Mogadishu manning roadblocks and checking up all cars and ready to repel any government soldiers.

There is no immediate casualty [count] on both sides as the exchanging artilleries [are] reaching residential areas. Many people grew more concern[ed] over the fighting might spread into fresh areas.

And the captions with the photos:

The body of an Ethiopian soldier lies in the Middle of Hawlwadag road, south of Mogadishu on Wednesday 21 March, 2007 after as heavy fighting between Somali government soldiers backed by Ethiopian forces and armed Somalis opposing the transitional government takes place in the capital Mogadishu

The body of a Somali soldier lies in the Middle of Black Sea road, south of Mogadishu on Wednesday 21 March, 2007…

Whenever you read about bringing democracy to the Muslim world, remember Somalia. This is what happens in Somalia whenever the iron fist of a dictator loosens its grip.

But whenever they are left to their own devices, this is what they tend to produce. The place is a textbook case of the behavioral sink. It makes Gaza look like the heart of civilization.

If you follow the link to the Shabelle site, you’ll notice some interesting features surrounding the news stories there. On the sidebar and in the header, next to or above the photos of horror and mutilation, you’ll see ads for anti-Bush T-shirts. The same ads you might find on Daily Kos, or on virtually any commercial American website.

There’s also a banner proclaiming that Shabelle is a “partner with Radio France”. Does that explain the anti-Bush commerce? Or is there just a perfect convergence across the entire world of moonbat sentiments?

Your guess is as good as mine.

9 thoughts on “Déjà Vu All Over Again”