Having promised the future Baron a plug for Dinesh D’Souza’s latest book, here is the fulfillment of that pledge. 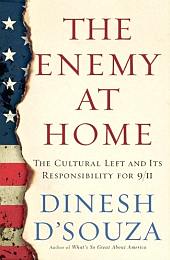 The book is called The Enemy at Home: The Cultural Left and Its Responsibility for 9/11. Obviously, as any regular reader of Gates of Vienna knows, we agree with the title.

What makes Mr. D’Souza’s take on the current situation a little different from the usual writer of political books is that his childhood background was truly a “multicultural” setting:

I grew up in Mumbai in a community almost equally divided among Hindus, Muslims and Christians. The families I grew up with had different religions, but they had common aspirations and their values were very similar. They disagreed on theology but agreed on morality.

Note the last sentence. “They… agreed on morality.” And that morality was essentially conservative:

I realized in reading the Islamic radical thinkers that they were speaking not just to Muslims in the Middle East but to the great mass of traditional people in China and India and South America and Africa. These cultures are all religious, patriarchal, and culturally conservative. And what the radical Muslims were saying to them is that our religion and our morality is under attack. In the Middle East this translates to “Islam is under attack.” It is under attack by America, the fountainhead of global atheism and moral depravity. According to this critique, America is using its power around the world to thrust its values on the world’s people against their will. The effect will be to dilute religious faith, undermine the traditional family, and corrupt the innocence of the children. I found myself facing a totally different critique of America than the one we are accustomed to in the West.

Mr. D’Souza differentiates between what conservatives and leftists think are the root causes of Islamism. The former, he says, view radical Muslims as opposed to our freedoms and want the advent of the Ummah in order to take us back to some dark age enslavement. I’d agree with that. Given that I’ve read it repeatedly in Islamic tracts, I also think it’s true.

The understanding of the Left, he sees as “so off-base as to be largely irrelevant”: the radical Muslims are upset because of the Crusades.” [so goes the Left’s mantra -D]

But the Crusades were a belated, clumsy and unsuccessful effort to block the Muslim conquest of Christian territory—the holy land—and Muslim invasion of Europe. The Crusades failed, and Muslim historians hardly mention them because they are considered an insignificant chapter in much bigger story of the spread of Islam to three continents.

Then the Left claims “they are upset because of America’s history of colonialism.”

To which Mr. D’Souza responds:

But America has no history of colonialism in the Middle East. In fact, after War II, America used its influence to send the British and the French colonists home. “They’re upset because American foreign policy is so pro-Israel and anti-Muslim.” Yes, Israel is a source of Muslim irritation and embarrassment, largely because every few years Israel stands up and pistol-whips the entire coalition of Muslim countries in the region. But despite its unwavering support for Israel, America’s foreign policy has hardly been anti-Muslim.

He calls his new book “provocative”:

…it gives a new and disturbing interpretation to the post-9/11 world, and it names “the enemy at home”—the people and institutions in this country who sowed the seeds of 9/11, and who are working in league with the enemy to defeat the “war on terror.”

Yes, I am speaking of none other than the cultural left, such people as Hillary Clinton and Nancy Pelosi and Barney Frank and George Soros and Al Franken and Michael Moore. Throw in the ACLU and the radical feminist groups and the gay rights groups and the so-called human rights groups and you get the general picture. My contention is that without the influence of the cultural left in America over the past couple of decades, 9/11 would not have happened.

The Enemy at Home is not just a book about 9/11. It is also about the left’s campaign—so far successful—to undermine the war on terror and ensure that America retreats in humiliation from Iraq, just as it did in Vietnam. This “war against the war” has now assumed a new dimension with the Democrats seizing both houses of Congress. In effect, some of the people who want America to lose, and lose big, now have their hands on the levers of power.

Provocative? Undoubtedly. However, there is at least one serious flaw: Mr. D’Souza says that his ideas, as presented in his new book, are a “new and disturbing interpretation of the post 9/11 world.”
– – – – – – – – – –
But this line of thought was being laid down immediately after 9/11 by… you guessed it: blogs. The Belmont Club has been beating this here particular drum for some years now, with fine analyses of the problems that are informed by Wretchard’s observations as a young man in the Philippines, and his understanding of history, military strategy, and literature. It takes that kind of breadth to generate synthesis.

Here at Gates of Vienna, we’ve been discussing the treasonous beliefs and behaviors of the Left for over two years now. Compared to some of our predecessors, we’ve not been at it long.

That said, I’d like to read this book to see if Mr. D’Souza may entertain the notion that radical Islam could be projecting when it claims, as he says, that “America is using its power around the world to thrust its values on the world’s people against their will.” That’s an ideology and a behavior. Both can be argued on their merits (or lack of them). But America is not a place that beheads dissenters or trains its children for shahid martyrdom (though the Left might claim that’s what our military amounts to). We have created no Beslans, no Taliban societies. Though the Left is certain that this is the Christian Plan.

Those perfervid theories aside, there are indeed behaviors that have been performed before cameras and watched by billions of people all over the world. The sales of beheading snuff films, not to mention the movement of illegal drugs and slavery, have financed the Islamists’ killing fields — or deserts, as the case may be.

The amoral behaviors of the mullahs in Tehran, with its rampant child prostitution, its growing HIV-AIDS population, and its horrible poverty, homelessness, and lack of jobs are all testaments to the huge chasm between radical/fundamentalist Islam’s rhetoric and its reality. Such gaps go beyond hypocrisy to some realm of calculating cynicism we haven’t seen since Communism was in full flower.

It may be that radical Islam simply picked up the bloody sword that Communism dropped. Perhaps it is filling some necessary void — some essential manifestation of evil — that is inherent in humanity at our current level of development. As long as there are those who believe in some kind of Utopia — a place where perfection reigns — we will have evil loose in the world, determined to delude the Believers that paradise can be had, or enforced, in this mortal realm.

Name your fantasy: a physical environment without flaw, a polity without unfairness, a faith without sin, a science with all the answers. In those directions lie madness. And in the alliance of the America-hating Left and the America-hating Islamists you have the perfect storm of destruction.

What will be left standing?

18 thoughts on ““The Enemy at Home: The Cultural Left and Its Responsibility for 9/11””