Last month I quoted my avatar, the fictional Unspiek, Baron Bodissey, on the topic of evil:

The evil man is a source of fascination; ordinary persons wonder what impels such extremes of conduct. A lust for wealth? A common motive, undoubtedly. A craving for power? Revenge against society? Let us grant these as well. But when wealth has been gained, power achieved and society brought down to a state of groveling submission, what then? Why does he continue?

The response must be: the love of evil for its own sake.

The motivation, while incomprehensible to the ordinary man, is nonetheless urgent and real. The malefactor becomes the creature of his own deeds. Once the transition has been overpassed a new set of standards comes into force. The perceptive malefactor recognizes his evil and knows full well the meaning of his acts. In order to quiet his qualms he retreats into a state of solipsism, and commits flagrant evil from sheer hysteria, and for his victims it appears as if the world has gone mad.

A reader in Israel emailed me to point out a resonance between the Baron’s words and a recently posted essay on the blog Hirhurim Musings. In “The Two Faces of Evil,” Gil Student cites rabbinical authority on the subject of human evil, and then muses on the topic himself:

Pharaoh is in fact (and this is rare in Tanakh) a tragic figure like Lady Macbeth, or like Captain Ahab in Melville’s Moby Dick, trapped in an obsession which may have had rational beginnings, right or wrong, but which has taken hold of him, bringing not only him but those around him to their ruin. This is signaled, simply but deftly, early in next week’s sedra when Pharaoh’s own advisors say to him: “Let the people go so that they may worship the Lord their G-d. Do you not yet realize that Egypt is ruined?” (10: 7). But Pharaoh has left rationality behind. He can no longer hear them.

It is a compelling narrative, and helps us understand not only Pharaoh but Hitler, Stalin and other tyrants in modern times. It also contains a hint — and this really is fundamental to understanding what makes the Torah unique in religious literature — of why the Torah teaches its moral truths through narrative, rather than through philosophical or quasi-scientific discourse on the one hand, myth or parable on the other.

Compare the Torah’s treatment of freewill with that of the great philosophical or scientific theories. For these other systems, freedom is almost invariably an either/or: either we are always free or we never are. Some systems assert the first. Many — those who believe in social, economic or genetic determinism, or historical inevitability — claim the second. Both are too crude to portray the inner life as it really is.

The belief that freedom is an all or nothing phenomenon — that we have it either all the time or none of the time — blinds us to the fact that there are degrees of freedom. It can be won and lost, and its loss is gradual. Unless the will is constantly exercised, it atrophies and dies. We then become objects not subjects, swept along by tides of fashion, or the caprice of desire, or the passion that becomes an obsession. Only narrative can portray the subtlety of Pharaoh’s slow descent into a self-destructive madness. That, I believe, is what makes Torah truer to the human condition than its philosophical or scientific counterparts.

Pharaoh is everyman writ large. The ruler of the ancient world’s greatest empire, he ruled everyone except himself. It was not the Hebrews but he who was the real slave: to his obstinate insistence that he, not G-d, ruled history. Hence the profound insight of Ben Zoma (Avot 4: 1): “Who is mighty?” Not one who can conquer his enemies but “One who can conquer himself.”

The idea of being enslaved to evil is an ancient one, but it is still hard to keep it in mind when regarding a monster such as Saddam Hussein. It may well be that Saddam deeply enjoyed the torture and slaughter he visited on his unfortunate victims. But was he acting out of what we would call free will? Or was he simply applying a shrewd intelligence to make the most effective choices among evil possibilities, without ever having the choice of forsaking evil itself?

Turning to a Christian perspective on the same issue, there is no one who wrote more lucidly on the topic of human evil than the great theologian C.S. Lewis.

But first: we have been taken to task recently by commenters for presuming to write essays on theological matters instead of simply citing Scripture. Here’s what Lewis had to say on this issue:

It is Christ Himself, not the Bible, who is the true word of God. The Bible, read in the right spirit and with the guidance of good teachers, will bring us to Him. We must not use the Bible as a sort of encyclopedia out of which texts can be taken for use as weapons.

One of the main tenets of Christian doctrine is that Christ is the sole mediator between oneself and God. The Bible is not the mediator; it is a guide to help us find our way to Him. Unthinking reliance on the Bible is form of idolatry, to my mind.

But back to C.S. Lewis. Here is an excerpt from The Screwtape Letters (Note: “the Enemy” in this book refers to God, since the letters in question are written from one devil to another): 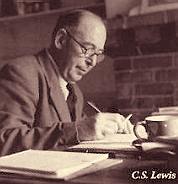 In peace we can make many of them ignore good and evil entirely; in danger, the issue is forced upon them in a guise to which even we cannot blind them. There is here a cruel dilemma before us. If we promoted justice and charity among men, we should be playing directly into the Enemy’s hands; but if we guide them to the opposite behaviour, this sooner or later produces (for He permits it to produce) a war or a revolution, and the undisguisable issue of cowardice or courage awakes thousands of men from moral stupor. This, indeed, is probably one of the Enemy’s motives for creating a dangerous world — a world in which moral issues really come to the point. He sees as well as you do that courage is not simply one of the virtues, but the form of every virtue at the testing point, which means, at the point of highest reality. A chastity or honesty, or mercy, which yields to danger will be chaste or honest or merciful only on conditions. Pilate was merciful till it became risky.

When virtue reaches a testing point, it makes a choice. If the evil path is chosen, both virtue and the range of additional options are reduced. Evil becomes progressively easier to choose, until the path of life has no more forks, and only the route of evil is left.

Or, as Lewis put it in Mere Christianity:

People often think of Christian morality as a kind of bargain in which God says, ‘If you keep a lot of rules I’ll reward you, and if you don’t I’ll do the other thing.’ I do not think that is the best way of looking at it. I would much rather say that every time you make a choice you are turning the central part of you, the part of you that chooses, into something a little different from what it was before. And taking your life as a whole, with all your innumerable choices, all your life long you are slowly turning this central thing either into a creature that is in harmony with God, and with other creatures, and with itself, or else into one that is in a state of war and hatred with God, and with its fellow creatures, and with itself. To be the one kind of creature is heaven: that is, it is joy and peace and knowledge and power. To be the other means madness, horror, idiocy, rage, impotence, and eternal loneliness. Each of us at each moment is progressing to the one state or the other.

And human beings — contrary to modern secular-humanistic doctrine — are not born with the innate ability to make moral choices. This faculty must be learned, practiced, and consciously maintained.

Telling us to obey instinct is like telling us to obey ‘people.’ People say different things: so do instincts. Our instincts are at war…. Each instinct, if you listen to it, will claim to be gratified at the expense of the rest…

The forms that evil takes in the modern world can be quite subtle. Not every incarnation of it is as recognizable as Saddam or Stalin. From the preface to The Screwtape Letters:

I live in the Managerial Age, in a world of “Admin.” The greatest evil is not now done in those sordid “dens of crime” that Dickens loved to paint. It is not done even in concentration camps and labour camps. In those we see its final result. But it is conceived and ordered (moved, seconded, carried, and minuted) in clean, carpeted, warmed, and well-lighted offices, by quiet men with white collars and cut fingernails and smooth-shaven cheeks who do not need to raise their voice. Hence, naturally enough, my symbol for Hell is something like the bureaucracy of a police state or the offices of a thoroughly nasty business concern.

And now we reach the quintessence of modern bureaucratic evil, Socialism. From “God in the Dock”:

Of all tyrannies a tyranny exercised for the good of its victims may be the most oppressive. It may be better to live under robber barons than under omnipotent moral busybodies. The robber baron’s cruelty may sometimes sleep, his cupidity may at some point be satiated; but those who torment us for our own good will torment us without end, for they do so with the approval of their own conscience. 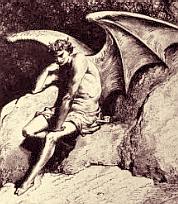 The greatest achievement of evil in our time is to have convinced us of its non-existence. To the modern mind, citing evil as a motive behind anyone’s behavior is to make a categorical error. People are victims of circumstances, in need of counseling, suffering from an addictive disease, or denied moral agency by forces beyond their control. No one is evil.

With the possible exception of George W. Bush, of course.

But to deny Lucifer is to make him stronger. Is it any wonder that the greatest and most virulent form of evil in recorded history has reared up before us now, at the dawn of the 21st century?

We stand before our secular altars, muttering incantations that deny it, but Evil will surely have the last word.

The quotes from C.S. Lewis were obtained from a variety of online sources.