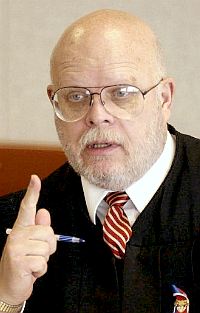 Judge Dithers Cashman of Vermont is beginning to see the error in his thinking — the error that led him to give a pedophile with a history of four years of ongoing abuse a mere three months for his sins. Perhaps, just maybe, he is growing an idea, one that involves his recognition that he may not be as knowledgeable about this kind of crime as he thought he was.

That’s the thing about judges: they stay in that bubble on the throne in the courtroom for too long, being shown a medieval kind of respect, and they forget they’re just folks.

At The Neighborhood of God two weeks ago, “In Cast Adrift by Judge Cashman” I parsed the evident sloppy thinking on the part of the judge. To announce that “anger is corrosive” as an excuse for his brief sentence meted out to this criminal may be the most ignorant thing I’ve heard from a local judge. Anger is a self-regulating response to being attacked. It allows us to defend ourselves. So this judge was going to solve everyone’s “anger” problem by giving the perp three months and lots of “treatment.”

As I said then, pedophiles are resistant to treatment, if not downright waterproof. Judges like this, who side with predators, are harmful to the commonweal. Parents are frightened when they hear how few consequences these life-destroyers face. It is almost unbearable to think that your child could be abused for four years, that you face decades of helping her stabilize and he gets three months. How’s that for a “bim-bam-thank-you-ma’am” outcome?

Fox News says he’s changed his mind and given the man a heavier sentence, but when you read the story, tell me if you understand what is being said. Is it Judge Dithers that makes the story confusing or is it the Fox reporter? It’s hard to tell.

To end on a happier note, I will tell you the funniest story I know about a judge and a pedophile. I heard this story many years ago at a child abuse conference. The man telling it was a certified child sex abuse expert — that is, the courts had qualified him as such when it came to examining alleged sex abusers and reporting his findings. The story he told us went like this:

There was a man on trial for repeatedly sexually abusing his thirteen year-old daughter. The man didn’t deny the abuse. His excuse was that he had to get his daughter up for school every morning and because they lived in a trailer, the hall was very narrow. When his daughter had to get by him in order to move to the living room, things were so crowded that his penis kind of “fell into” his daughter’s vagina. Therefore it wasn’t his fault. It was the trailer’s fault.

The judge pondered a bit and said to the man: “You’re absolutely right. You’re innocent.” At which point the man began to smile. “However,” the judge went on, “your penis is guilty as hell and I’m sentencing it to ten years in prison. You can go with it if you want.”

That judge was a genius. Too bad Judge Dithers didn’t have his good counsel before he tried this particular pedophile.

4 thoughts on “Judge I. Dithers and His Dilemma”