Sorghum City, Alabama (AP) — The stunning electoral victory by the Ku Klux Klan in this small southern town has taken veteran political observers by surprise. The political wing of the KKK won a total of 12 out of 16 seats on the city council, plus the offices of mayor and district attorney. Jimmy Carter, a former governor of the neighboring state of Georgia, headed a team of election observers who certified the election as “free and fair, within the limits to be expected in a strife-torn region like Alabama.”

Many locals are concerned about the future of the peace process between the white residents and the town’s Negroes, which the KKK refers to as an “occupation force.” Under the more moderate outgoing administration of the Democratic Party, negotiations with the black community had been pursued, even as the Democrats continued to assert their rights in the struggle against the “brutal Negro.” 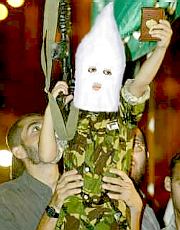 Billy Bugline, a member of the more militant “military wing” of the KKK, celebrated the election victory with his family last night. As his cousins fired guns in the air, he held up his youngest son Leroy, who was clad in the traditional white head garb of the Klan and waved its “holy book”.

Questioning the history of blacks in Alabama, Mr. Bugline said, “There’s no real historical evidence that ‘Slavery’ ever happened. It’s just a story cooked by the sinister African Cabal.” He cited a book called The Protocols of the Elders of Kilimanjaro as evidence of his contention. The book, however, has long been discredited, and is widely considered a forgery created in the 1950s by the South African Secret Police.

Other residents are less extreme in their views than Mr. Bugline.

“I voted for the Klan because it means a change,” said Mrs. Flossie Needlefoos as she stood in front of the feed store with other local residents. “We’re all tired of the corrupt ‘business-as-usual’ attitude at City Hall. It don’t mean I want to kill all the Negroes. I just want them to return to their proper place.” Heads around her nodded in agreement.

Political analysts speculate that the KKK, now that it has gained real political power, will become more pragmatic in its outlook and withdraw its long-standing call for the extermination of all black people. That would lay the groundwork for a return to the negotiating table and a resumption of the long-stalled peace process.

Only time will tell.