On September 11th, 2001, something happened, but I don’t quite remember what it was. 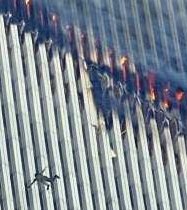 Were there some planes that crashed into buildings? Were there fires? And didn’t some people die? I can’t remember…

For a little while the TV showed me some pictures… And then… I didn’t see them anymore, so I forgot them.

If I concentrate really hard I seem to remember people jumping from burning buildings.

The images were too disturbing. I was told they were “divisive.” What if I kept seeing them? I would become enraged and take it out on an oppressed ethnic group. I might question the value of our unique multicultural society, the one that tolerates and respects diversity. So I didn’t see the images anymore… and I forgot.

There were images that were appropriate for ordinary people like me, so I was shown them instead.

Pictures of hooded men standing with wires attached to them, of leashed naked men being taunted. There were photos of men with women’s underwear on their heads. Terrible things were being done to these men; their religion was disrespected and they were kept up past their bedtimes. Sometimes they had to listen to loud pop music.

Terrible, terrible things were done, and I saw those images over and over again until they were seared — seared — in my memory.

I forgot the other images.

The images of Americans suffering and dying for no reason: I forgot them.

The images of brave firemen and policemen entering burning buildings to face certain death: I forgot them.

The valiant soldiers who fought on my behalf to prevent more innocent people from being killed: I forgot them.

Oh, I do remember a bad man reading about a pet goat while people suffered, a bad man who sent psychopaths to kill kite-flying children in a faraway country of which I know little*. I remember that image well.

But I can’t seem to recall a planeload of ordinary Americans who decided to fight back, knowing by then that they were going to die. Nor do I remember their microscopic fragments scattered across the green fields of Pennsylvania.

When I try to remember that beautiful fall day and those frightened children and their mothers in a jetliner rushing towards the side of a skyscraper… I just can’t.

Please help me remember. Should I tie a string around my finger? Write a note to myself?

Help me not to forget.

*In 1938, as he prepared to abandon Czechoslovakia to Adolf Hitler, British Prime Minister Neville Chamberlain said dismissively, “This is a faraway country of which we know little.”

UPDATE: Here are some excellent 9-11 memorials worth a look, by Michelle Malkin, Bill Quick, and CUANAS (multiple posts with photos; start at the top and keep scrolling).