The cave rescue operation in Thailand has been in the news for the last week or so, but most English-language articles are short on both details and context. Since the drama is taking place right on his doorstep, our Bangkok correspondent H. Numan fills us in with this digest of the events so far. 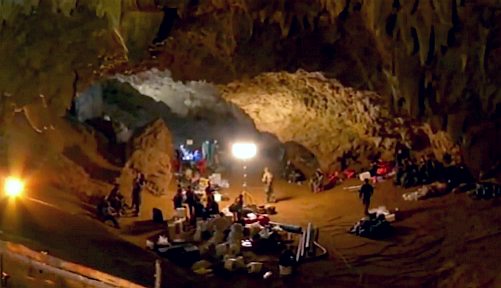 On 23 June a junior soccer team, the Wild Boars, went on an outing to explore a cave. Very likely the were surprised by a rainstorm and were no longer able to exit the cave. The onrushing water forced them deeper inside the cave. Later that day a forest ranger found their bikes parked near the entrance of the cave, and raised the alarm.

It was assumed the twelve boys, aged 12 to 16, and their coach (25) were locked inside, and a rescue operation was started. That rescue operation got bigger and bigger and is now the biggest rescue operation ever attempted in the history of the kingdom. From a few brave souls crawling in the cave it became a huge operation with well over a thousand of people working frantically to save the kids. The army, police, navy, navy SEALS, many local and foreign volunteers, even the government of Myanmar offer as much help as they can. There are now experts from Belgium, Australia, Britain and China. The US armed forces help with advice, experts and logistics. Private companies offered help and expertise. For example, Elon Musk offered his latest batteries to power the electric pumps. 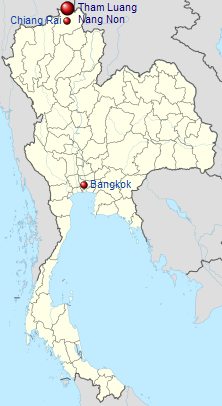 A bit of background for you: the cave is named Tham Luang Nang Non (ถ้ำหลวงนางนอน; “Great Cave of the Sleeping Lady”) and is actually a huge underground complex.

It stretches for miles underground. It’s massive maze of rooms, chambers connected by narrow passages. It was hoped the boys found refuge on a large sand dune named ‘Pattaya Beach’ about three miles deep inside the cave. The mountain and the cave complex are right on the border with Myanmar. That complicates the situation somewhat; fortunately, the president of Myanmar personally ordered full cooperation with the rescue operation.

For nine days teams of divers and expert speleologists slowly worked their way towards the assumed position of the boys. The whole nation held its breath. Are the kids still alive? Then on Sunday great news: two British experts in cave diving were able to reach the boys. All were in relatively good health. They hadn’t eaten anything and licked water from the walls. Their coach was sensible enough to tell them not to drink the muddy water directly. The little food he had he gave to his pupils and he’s now sort of a national hero. The group sat there alone in the dark. They had no idea how long they had been there, the first question was ‘what day is it?’

Help came from all over the world. Thailand itself tries whatever it can to rescue the boys. That’s very difficult for many reasons. It’s the rainy or monsoon season right now. It rains heavily, especially in that area. The caves are largely flooded. The boys are marooned inside a cave on a sand dune. None of them can swim, let alone dive. The water is like latte coffee; visibility is zero. The current is strong. Inside the caves it is pitch dark. (The boys did have flashlights, and many more were brought by rescuers.)

Only expert cave divers are capable of reaching the boys. Not just professional divers; they need to be expert cave divers as well. That’s a whole different ball game. Cave diving is by far the most dangerous form of diving there is. An expert diver with many years of experience under his belt who has never before dived in caves is not an expert, but a liability.

To prove my point: a Thai ex-navy diver, Petty Officer 3rd Class Samarn Kunan, drowned last night on his way back from the cave to the base camp. He rain out of air on the way back.

How to get the kids and their coach out of there? That’s the (many) million dollar question. The kids can’t swim, let alone dive. Expert divers need a couple of hours simply to reach them. It’s not like ‘just give them a mask and a bottle of air, and pull them out’. They have to swim, crawl and dive through water with zero visibility through narrow passages for a couple of hours. In some places divers have to take off their equipment under water in order to get through narrow passages.

The problem is that there aren’t that many other options. Believe me, they’re trying everything. As it stands now, there is only one way out of the cave and that’s the hard way. Another possibility is to supply the boys and their coach and wait until the monsoon is over. Which means that they have to remain there until at least October. It’s not certain if that is even possible. Bad weather is on the way, heavy rainstorms are expected in the weekend. Furthermore the natural oxygen supply in the cave seems to be in doubt.

Can’t they pump out the water?, you may ask. Of course. That was one of the first things tried. Right now 1,500 rai (240 hectares) of rice paddies are flooded because of the pumping. The government showed its best side: the farmers get full compensation for the loss of their crops. Thousands of cubic meters of water are being pumped out.

Unfortunately, it is not enough. Not even by a long shot. You have to experience a tropical monsoon storm to truly understand how much water falls down. It’s massive. Lots of that water seeps through rocks and passages inside the caves. Whatever is pumped out is replaced by much more water. At the moment the situation is stable, the water level is dropping a bit. But not a lot. If during the weekend a storm hits, it might very well rise again.

Rumors abound. Today I read stories that conflict with each other: some divers say evacuation is imminent, others stories deny this and say the exact opposite.

This incident united the nation. There aren’t red, yellow or whatever colors here. Everybody works to rescue the kids. This goes well above politics. The king expressed his sympathy, personally donated food for the rescuers (that’s more than you think: a thousand people working hard eat a lot in fourteen days), and equipment. He made it known that all foreign rescuers are to be treated as his personal guests as long as they are in Thailand. Something the nation whole heartily agrees with.

I’ll keep you informed about progress.