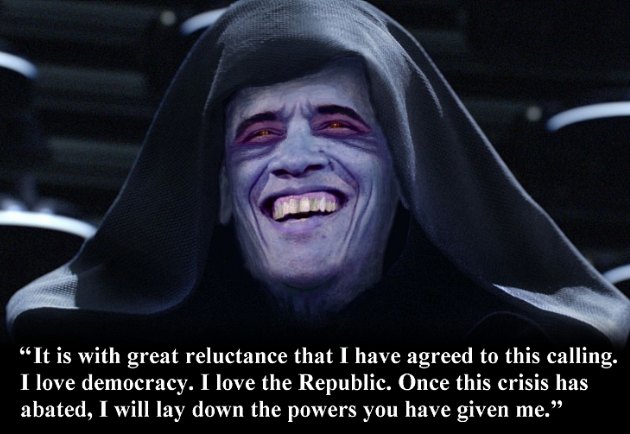 Emperor Palpatine was a character in several of the Star Wars movies, including the dreadful three-part “prequel” that was made many years after the original trilogy. Fortunately for me, I can’t remember much from Parts I-III — just a sith falling into a big hole and people jumping out of air cars.

And the emperor, of course. For readers who are unfamiliar with Star Wars, Palpatine begins as a senator in the Galactic Republic and ascends to the position of Supreme Chancellor. His political machinations lead to the dissolution of the Republic, and he eventually declares himself Emperor of the new Galactic Empire.

There’s no need to belabor the obvious parallels.

In the movies, Emperor Palpatine comes to a bad end and earns his just deserts. Alas, that’s just in a fantasy world.

Interestingly enough, Robert Tracinski has been thinking along the same lines. I began photoshopping the Obama-Palpatine image last night, and this morning “President Palpatine” arrived in Mr. Tracinski’s email newsletter. So Palpatine seems to be in the air these days…

All hail the Emperor!