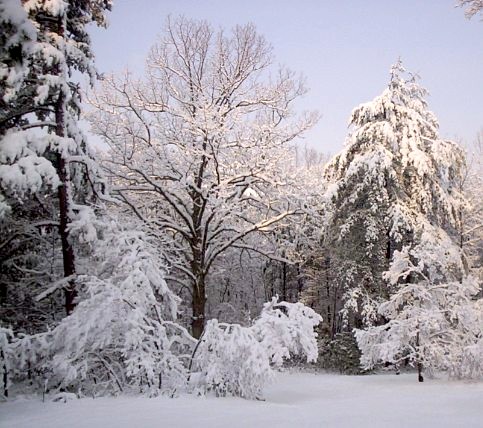 Our weather isn’t really like that — at Schloss Bodissey, Christmas Day 2013 dawned cold, but sunny and bright. The photo above is actually from February 2006.

And strictly speaking, the following poem isn’t a Christmas poem, either. But it’s about children untying packages, so it will do:

Warning to Children
by Robert Graves
Children, if you dare to think
Of the greatness, rareness, muchness
Fewness of this precious only
Endless world in which you say
You live, you think of things like this:
Blocks of slate enclosing dappled
Red and green, enclosing tawny
Yellow nets, enclosing white
And black acres of dominoes,
Where a neat brown paper parcel
Tempts you to untie the string.
In the parcel a small island,
On the island a large tree,
On the tree a husky fruit.
Strip the husk and pare the rind off:
In the kernel you will see
Blocks of slate enclosed by dappled
Red and green, enclosed by tawny
Yellow nets, enclosed by white
And black acres of dominoes,
Where the same brown paper parcel —
Children, leave the string alone!

For who dares undo the parcel
Finds himself at once inside it,
On the island, in the fruit,
Blocks of slate about his head,
Finds himself enclosed by dappled
Green and red, enclosed by yellow
Tawny nets, enclosed by black
And white acres of dominoes,
With the same brown paper parcel
Still untied upon his knee.
And, if he then should dare to think
Of the fewness, muchness, rareness,
Greatness of this endless only
Precious world in which he says
he lives — he then unties the string.

One thought on “Children, Leave the String Alone!”