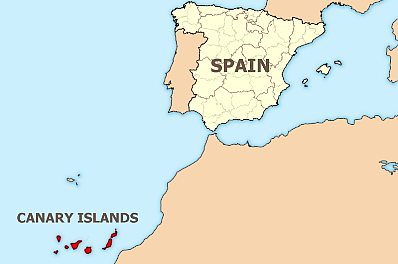 The Canary Islands are an autonomous province of Spain, and also the westernmost outpost of the European Union. Like the rest of the EU, the islands are facing a crisis brought on by years of open-ended immigration.

Many thanks to our Spanish correspondent Hermes for his translation of this article from Alerta Digital:

Canary Islands: there is no room for more immigrants. The Canarian president warns that the Canarian economy cannot provide solutions for more people.

The Canarian president, Paulino Rivero, asked last Sunday for a “calm and scaremongering-free” debate to be held on the number of inhabitants in the archipelago, because in his opinion, the economy of the islands is unable to manage the population growth and reduce unemployment.

Paulino Rivero states in his blog that the figures speak “loud and clear” regarding the almost 180,000 foreigners who arrived in the last 10 years, and the 23,000 newcomers registered in 2011 due to migratory flows.

The population in the Canary islands has grown by 388,178 in almost 10 years, and the reality confirmed by the statistics “must force us to calmly reflect on the archipelago’s carrying capacity”, the president explains. He asks for carrying out an analysis on how many jobs the Canarian economy can create, and to detect the impact of this unstoppable population increase in the islands and in the delivery of public services.

“I think it’s rather evident that the Canary Islands cannot grow indefinitely and expand without end, a demographic growth which began in 1960,” Rivero reflects.

A debate with a “mature approach”

That is why he asks for a debate “with a mature approach and without delay” on the capacity of the islands to provide solutions in terms of employment, health care and education to this kind of population growth.

“We should not brush away a debate by contaminating it with gratuitous and unjustified accusations of promoting attitudes of rejection towards people coming here. It is not about marginalizing those who are different, but about establishing certain limits that allow our economy to supply jobs for all who are now in need of one, and to offer a proper level of public services,” he explains.

He warns that it is very difficult to accommodate the public system of basic services to such a huge population growth, and he adds that above all it is materially impossible for the Canarian labor market to accept so many job-seekers.

Paulino Rivero points out that it is not possible to “stand idly by” nor make cuts to the funds for educational policies “just as the Popular Party did” by reducing from 42 to 10 million euros the funds for the Canarian Integral Employment Plan, thus leaving thousands of Canarians in an unfair and unacceptably vulnerable position.

12 thoughts on “The Canary Islands Are Full”