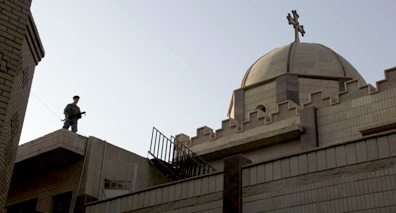 A Christmas Message
by Elisabeth Sabaditsch-Wolff

I say tried, because — as is the case every year this has taken place — the ignorance of the greatest persecution currently underway worldwide is drowned by the constant whining of members of the Muslim faith. One would even think that jackboots roam the streets of Vienna and Berlin, searching for Muslims, in order to deport them or worse. Nothing could be further from the truth: members of the Muslim faith are coddled, while it is the Christians (and the Jews, I might add) who fear for their lives, and rightly so.

Not only are the so-called hate crime statistics quite clear on the matter, but even a cursory glimpse at the daily headlines relates the obvious: the number of burned-down churches, of murdered Christians, of Christians driven into exile, is staggering. In comparison, mosques are in general not targeted, other than the lone slab of bacon here and there.

This is a tragedy of truly epic proportions. It is taking place not only in Islamic countries, but also in China and North Korea.

However, the greatest persecutions do happen in sharia-compliant countries. The rule “The more sharia, the less freedom (for other religions or none)” is strictly enforced. One need not look far in this case: Tunisia — which prior to the “Arab Spring” was quite a tolerant country with respect to non-Muslims — is now harassing atheists, while Islam’s blasphemy laws are choking the hard-fought for freedoms not only in Pakistan but around the world. Reading the monthly reports about Muslim persecution is reserved for those with stable mental health.

However, there is a light shining from above, almost literally. It is, after all, Christmas. And for this reason I will now talk about a very Christian matter: visions of Christ in the Muslim world.

I personally have been aware of staggering numbers of conversions to Christianity in Iran for quite some time. The reports coming out of Iran seem to corroborate this. Many of the previously mentioned visions are taking place in Iran, but most astoundingly also in the heart of Islam, Mecca!

By chance, I came across a book called Dreams and Visions. Is Jesus Awakening the Muslim World? by Tom Doyle. A pastor, he has spent more than a decade as a missionary in the Middle East, where he has encountered countless stories of Muslims who converted to Christianity after visions and/or dreams in which Jesus appeared. In the introduction, Doyle tells the reader that

… the stories [in this book] are about real people I know personally or are known by my family’s closest friends in the Middle East. If we couldn’t verify the experience, we left it out — no Christian fairy tales here.

The entire book is filled with truly amazing stories, but two stood out: finding converts in Mecca, and a group of imams huddling together in the middle of the night to read the Bible.

It is common knowledge that the cities of Mecca and Medina are strictly off-limits for non-Muslims. As a result, it is impossible for missionaries, or even archeologists, to enter the cities. But it appears that God found a way by sending a lapsed Lebanese Christian by the name of Amir on business to Saudi Arabia. By pure chance, the passport official stamps the word “Muslim” in Amir’s passport, opening Mecca to him. Amir is a cynical man, full of sarcasm and disdain for Islam and its followers, which changes dramatically when one night in his hotel room he receives a visit by an angel, commanding him to pray for them (the Muslims). But not just anywhere! He is commanded to go to Mecca: “Go and pray for them in Mecca. Do not be fearful, Amir.” After an appearance by Jesus the next night, Amir buys Islamic clothes and takes the bus to Mecca, where he joins millions of Muslims circulating the black meteorite known as the Kaaba. Later, as he watches in horror Abu Badr, the executioner, amputating the limb of a thief, he thinks of nothing but his new-found love for Jesus. On his way back to hotel, he is startled to overhear the following conversation: “It is the third dream since I have been here. But what does it mean?” Later, he is joined by a man trailing him. He fears that he will end up in Abu Badr’s hands. But the man stops and says: “I am your friend. I am Muhammad.” And then he disappears, only to come to his rescue when the authorities are nearly successful in their search for Amir. “Are you all right, brother?” Muhammad asks Amir. Amir is surprised to find out that Muhammad received visions of Jesus when he was on the hajj. He remained in Mecca as per Jesus’ instructions “to pray for them”.

Tom Doyle says that the birthplace and spiritual capital of Islam, Mecca, is not only the most controlled and revered spot on the planet (p. 45). In addition, Mecca is 100% Muslim and has been so for many centuries. And despite this hostile environment, Jesus is at work, for the number of sightings reported from Mecca by pilgrims like Amir and Muhammad are impressive. These pilgrims report that “I went to the hajj to get close to Allah, but I kept having dreams about Jesus. Every night he would visit me. He told me to follow Him.” And since the new believers cannot legally change their religion on their ID cards, they can return to Mecca anytime they want or are sent. A gift from God.

Qom, in Iran, is the world’s largest training center for Shiite clerics. The seminaries there host more than 40,000 students. A city filled with fanatics — it is not a welcoming place, in particular for Muslim clerics discovering Jesus. Meet Ali, who was “a celebrated scholar-in-the-making” (p. 88) and who had memorized the Koran very early in his studies. None of this prevented Jesus from appearing to him. At first, Ali is very confused: “Why is this prophet appearing to me? What is the meaning of His messages about salvation?” (p. 88). So he plans to check the writings of the Bible, a quest that leaves him startled, because how will get a Bible in Qom? He doesn’t. But a Christian friend in Tehran does, and for the next six years, Ali scrutinizes the Bible, teaching himself how to cross-reference. In his dreams, he takes his questions to Jesus, who then answers him. He graduates a Shia imam in Qom despite his late Bible studies.

A similar story then takes us to Syria, where Jamal is the son of the feared Grand Mufti of the Gaza Strip. Despite his family’s deep devotion to Islam, Jamal is a dedicated follower of Jesus Christ. One day there is a knock on his door. He opens, fearing that he is found out by the authorities, and in front of his door there are two men asking him to let them in. One is Sheikh Imam Ali, who sits down and reaches beneath his robes to pull out …. not a dagger, but a Bible! He declares, “This book is the truth! I have been reading it privately for six years now.” And pointing to the Koran, he says, “And this book is a fairy tale. It is make-believe like a Disney movie.”

Read more about this and many other fascinating encounters in Tom Doyle’s highly recommended book. Whatever your religion (or non-religion) may be, these accounts are similar throughout the Muslim world. How else would a non-Muslim be able to enter Mecca without meeting the sword? How else would a Shiite cleric in Qom be able to find a Bible and survive his clandestine studies? Something is happening here. Whatever it is — it is heart-warming and heartening.

After another very tough year, we all deserve some magic. Whoever does the magic is irrelevant at the end of the day. What is relevant is the number of Muslims deciding to side with freedom and love, leaving behind darkness, despair and hatred.

Merry Christmas to all of you!

6 thoughts on “A Christmas Message From ESW”