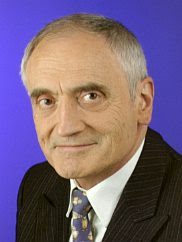 This is the second part of a four-part translation of an article by Hans-Peter Raddatz, a well-known German author and scholar who specializes in Islamic issues. The original was published in issue Nr. 5/2012 October of Die Neue Ordnung (pdf; table of contents here). In it Dr. Raddatz discusses the most recent book by Bat Ye’or, and its significance as the Islamization of Europe enforces “a comprehensive tolerance and religious freedom for Islam as the new dominant culture.”

Many thanks to JLH for taking on the task of translating this important work. Part One is here.

Bat Ye’or’s Caliphate offers us a look at a political and cultural reality whose advance on the citizens of the European Union is as covert as it is ruthless. As other cultures, primarily Islam, are forced upon them as peace-making panaceas to which there are “no alternatives” — certainly not in their own culture — it is possible to cleverly deploy words like faith, tolerance, respect, solidarity, performance, etc., to gradually train the public in interculturally correct thinking and actions that can then be further bolstered by institutions properly directed by the media. It is here that the book’s contents take on great significance by exposing the Islamocentric consequences of pluralistic modernization and the alternative-cultural diktats in discourse. These latter are used to defame Bat Ye’or’s volatile, uncomfortable statements as conspiratorial thinking or worse, which increases the need for an impartial imposition of order. And so much the more, since the author is suffering attacks from the media and the internet which are additionally directed against her person and her background. The Caliphate, as her newest book, is a summary, updating an expanded evaluation of processes which she described in her work, Eurabia — the Euro-Arab Axis — a characterization which was circulating long before in US diplomatic circles (US embassy, Madrid Doc.05880/1974). It is about the Islamization of Europe, which since about 1970 has been almost the exclusive topic of the so-called intercultural or inter-religious dialogues in which Islam is marketed as the religion of abundant peace, cultural tolerance and ethical civilization. The central institutions of the Euro-democracies — politics, economics, universities, jurisprudence, charities, churches — are fulfilling with increasing propagandistic pressure on public opinion the Islamic demands for freedom to expand and dominance of their own law (sharia), sustained so that this political religion — accompanied by wildly expanding immigration and the networking of mosques — is developing into a factor with far-reaching potential for extortion.

This type of process has sunk so deeply into the folk pedagogy of the dialogue, into the everyday work of the institutions and into the consciousness of the ruling classes, that Islam not only “belongs in Germany” as more and more actors in the dialogue emphasize, but, according to the standard of the EU commission, can be regarded as “co-owner of Europe.” No doubt the historic antagonist concerning the fait accompli of immigration will now become an element of political, social, academic and cultural life dictated to Europeans. The speech regulations play a decisive role in this, committing citizens to the elimination of their own worth as well as a comprehensive tolerance and religious freedom for Islam as the new dominant culture. So the claim to absolute validity could make Islam less a “part of Europe” than Europe a province of Islam.

Bat Ye’or’s book proves to be a hard-to-refute chronicle, describing this process as a mass deception by the elites. She documents a continuing, extortionate, unlimited tolerance of immigration, which sees compromise as the path to subjugation, until the “peace of Islam” — full conformity with its rules — has been reached. Citizens’ claims of basic rights like freedom of opinion, of person, and of a non-Islamic religion are considered “intolerance” because they conflict with the universal law of the dominance of Islam. Therefore, it appears “just” that protagonists — Muslim or otherwise — proceed against dissidents with attack terms like rightist radicalism, xenophobia and racism, but above all with the systemic concept, Islamophobia. Its totalitarian potential demands a correspondingly system-compatible evaluation of its set-up, but this is in widespread retreat as a result of the intensifying censorship in leading media. It should be understood that no power follows the rules that it sets for the people, that the driving forces of the world picture are — for their own part — the driven and they are driving today’s cultural change and making the future of older citizens available to our newer ones. Misusing their official positions, they are, when it seems useful, trading away constitution and dominant culture, while speaking deceptively of freedom and democracy, but in fact advancing dictatorship and compulsion. The empty phrases of the dialogue mills have the effect of the proverbial dripping drops which hollow out institutions, finagle the general trust of the public and advance the encroachment of the Islamic complex. The loyalty of the public is still to the elites in the person of representatives oriented toward the public welfare, who meanwhile — with their protection of Islamic interests, its destruction of the original culture and their own social aspirations — are well “on the way to democracy” of another kind.

Using the example of Islamically-induced anti-Semitism, I myself have already demonstrated the mechanisms which are driving the elites of Europe toward an apparently unstoppable Islamization (Allah and the Jews, Berlin, 2009). In this process, the intercultural dialogue stands for a self-propelled strategy under the aegis of the UN, in the proliferating networks of the EU, its states and the Islamic world. The UN, for its part, has been under strong Arabic influence since the British passed the Palestine mandate in 1947. Therewith, the continuation of the Nazi-Islam clique was guaranteed at the highest level, which led — in the subsequent trend to the Left in postwar Europe — to a Nazification of the Socialists, and plays a large role in Bat Ye’or’s account. The common nomenclature of this Left-Right fusion de-democratized the states in the European unification, that is, it reduced the participation of the people to areas which had no influence on the ongoing Islamic expansion. The anti-democratic transfer of sovereignty from EU states to the unelected Brussels oligarchy gave a kick-start to an imperial formation of the Union which distanced itself from the republican principle and took on dictatorial — or at least neo-feudal — characteristics. With the level of multicultural tolerance, this process elevated Islam to the lead culture of ultimate “peace,” because its oil, money, people and import power promised the greatest “intercultural” potential. The impetus of the OIC (Organization of the Islamic Conference — since 2011, Cooperation) strengthened the Left-created UN Nazism, which allied itself with Arabic lobbying for the Koranic canon of hostility against Jews and Christians. This procedure has a 100-year tradition. Anti-Semitism, hostility to churches and Islamophilia belong to the basic heritage of the Enlightenment.

On this model, the red-brown Epigoni* of the postwar era transformed Muslims into victims of European colonialism, whose misery could only be alleviated by uncontrolled immigration. In the concentrated lens of this perspective, Israel appears as a mega-colonialist who is degrading the Palestinians to the ultimate scapegoat and sacrificial folk of world history — an anti-Zionist myth cultivated since the Balfour declaration of Project Israel (1917). It transforms Palestine to the original home of the Arabs and the Palestinians to a people allegedly in residence there for a thousand years. Parallel to the Islamic expansion into Europe, there arose an obsessive Palestine cult — a Euro-Islamic pseudo-religion, which elected Gaza to be the object of pilgrimages and the Palestinians to be the chosen people. At the same time an obligatory paranoia spread, which sees a global threat in Israel’s self defense — with a thousandth of the world’s population. Primarily moved by the agitation of Arab delegations, this “terror-state” attracts one-third of all UN resolutions as well Palestinian suicide bombers and rockets. All of this is financed basically by the taxes of Europeans and distributed according to the direction of the EU empire. The covert, mafia-like collaboration of European and Islamic elites is at the center of Bat Ye’or’s discomfiting thesis of the Coming Caliphate.

The twin pilots of this drift into totalitarianism are the Islamic Terror Tandem, Mufti Amin al-Husayni and his disciple, Yassir Arafat. As Hitler’s helper, the former profited from the respect of the combatants, Germany and Great Britain, and escaped the Nuremberg Trials at the intervention of America and France. Arafat was the sought-after partner of such apparently diverse players as the UN, superpower America, the red-brown oligarchy of the EU and both churches. His armed entry to the UN in 1974, the Nobel Peace Prize honoring him and Egyptian President Sadat for the “peace treaty” of Camp David in 1978, his regular visits to Pope John Paul II and his role as the father of modern terror distinguish him as an integrating figure of the Euro-Islamic leadership classes.

From this is derived the ideological concept of Mufti-ism which had already characterized the Middle Eastern policy of war combatants Germany and Great Britain. Today it includes the Dialogue as an expanded inclination toward a new totalitarianism, spread under the anti-Jewish pressure of Islamic interests. The radical energy of this trend expresses not only anti-Semitism, but an indifference to citizens, heavy tax burdens, censorship, perversion of justice and animadversion to one’s own culture, giving impetus to the imperceptible transmogrification from democracy to dictatorship. After the Nazi ideology had borrowed from socialism and the Koran, its left-inclined disciples are drifting into a political multiculturalism which is supplanting the constitutional state and Judaeo-Christian culture with people, sharia and capital. In the process, Arafat’s credo — “For us, peace means the destruction of Israel” — has infiltrated the UN, the EU and then other organizations such as UNESCO and many NGOs of the EU, which serve as “octopus arms” (Bat Ye’or ) to spread a concentrated anti-Israel propaganda.

Next: Dhimmitude versus Islamophobia

5 thoughts on “Europe and the Coming Caliphate: European Mufti-ism”