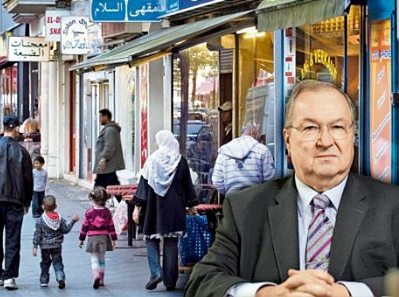 “In the final analysis, Bozkurt’s accusation means that science, truth, nature itself, are racist.”

The following article from blu-News discusses the demonization of Heinz Buschkowsky, Thilo Sarrazin, and others. Anyone in Germany who opposes the Multicultural/Islamic agenda is branded a “racist” by political leaders and the media.

Frankfurt Lip: The erstwhile sharpest sword of the integration deniers has long since grown dull

After Thilo Sarrazin, the mayor of the Neukölln district of Berlin, Heinz Buschkowsky, is the second Social Democrat who dares to rebel against the social dogmas of the Left with a book against political correctness and reality-denial in the integration debate. Those who preside over and profit from the prevailing circumstances continue to respond with their programmed automatism: “Buschkowsky, You Racist!” But the once-sharpest sword of the integration deniers has gone dull long ago. And that is good, damned good.

It really does not pay any more to comment on the subject of racism. The majority of the public is already reacting with indifference when this charge is used in the media and politics. Actually, that is bad, very bad. Racism is a bad thing and the accusation of being a racist is one of the most serious that can be made against a person. Really. But as with everything else, it is true here as well: When there is too much of something, it loses value. And hardly any other accusation was more frequently used in the media than this one.

The result is that everyone who dares to express definite, apparent truths is called a racist. Thilo Sarrazin and Heinz Buschkowsky have as little to do with what racism actually signifies as does the author of this essay.

Is there any doubt about what this term means?

“Simply expressed, racism is when someone constructs groups and then feels it necessary to determine that one group is to some extent inferior,” wrote SPD politician, Aziz Bozkurt, recently in a guest column for the (in)famous MiGAZIN. The occasion for his commentary was the publication of the new book “Neukölln is everywhere” by Heinz Buschkowsky, who — no surprise — in Bozkurt’s view “utilizes a racist pattern of argument,” “encourages fear of what is foreign,” indeed, even repeats “the arguments of rightist terrorist, Breivik.”

All of that is without substance and, considering its pathetic level, worth no more thought. Bozkurt offers us an outline of the usual stereotypes used in the camp of the alleged multiculturalists, whenever it is necessary to defame and criminalize unwanted opinions. They are incapable of substantive discussion or even controversy. At least not when it comes to this subject.

At any rate, the definition of racism that Bozkurt has pulled out of his sleeve is interesting. And in particular, the fact that he apparently sees himself compelled to define this concept which is used so often and so vehemently. Isn’t it clear?

Sarrazin and Buschkowsky are right!

Really, it is not clear what this term means. For instance, anyone who accuses Islam critics of being racists must deal with the question in the internet forums — since when is Islam a race? In order to maintain the reproof in these and other interrelationships, therefore, a new definition of racism is necessary. It is characteristic, at any rate, that Sarrazin and Buschkowsky themselves are not racists on the basis of this new bozkurtian definition. They do not “construct” any groups and they would never have accused a group of being “inferior in some way.” Human beings dividing into groups is as natural as the fact that there is male and female. Measuring, evaluating and comparing the behavior of individual groups and their behavior inside a society is something called “science.” At least among right-wing populists. In the final analysis, Bozkurt’s accusation means that science, truth, nature itself, are racist. At any rate, whenever it dares to produce politically undesirable results.

And that is the real problem which Bozkurt and his ideological comrades have recognized and are trying to deny with bizarre prevarications. Sarrazin and Buschkowsky are right! There is one immigrant group that integrates worse, becomes violent and criminal more often than all others: Muslims. That is the reality that is obvious to everyone and statistically documented. This knowledge is neither new nor revolutionary. It is true in Germany as in all other countries of the West. And it is not changed by the fact that the carriers of this news are defamed as racists.

The Lobby of the Integration Deniers and Multiculti Romantics

But that is exactly the idea, The conditions described by Sarrazin and Buschkowsky are not supposed to change. That is what Aziz Bozkurt is fighting for. And with him a whole lobby of integration resisters and multiculti romantics. Not too long ago, the self-evident consensus in this society (as in every other) was that immigrants integrate instead of forming parallel societies in the name of some alleged diversity. In less than a decade, the heirs of the ‘68 movements together with Islam apparatchiks, grievance administrators and integration industrialists have taken over the debate and are trying to turn the idea of integration into its exact opposite. To their benefit, of course.

In these circles, any one is designated a racist who even holds to the original concept of integration. So the truly applicable re-definition of the concept must therefore be: A racist is someone who stands in the way of the profiteers and representatives of the interests of the ostensibly multicultural society in their spouting mischief, distorting reality, sucking up the money and acquiring power.

Complaining about the logical Consequences of one’s own Actions

The MiGAZIN, for which Aziz Bozkurt wrote his guest commentary, is emblematic of a movement which is above all else against the German people. There is a pretense of representing the interests of all immigrants, but it actually represents only the interests of those who do not wish to integrate. It is lamented that those who have not integrated have difficulties in the educational system, are materially worse off and are less likely to find work in this society to which they do not wish to belong. They complain about the logical consequences of their own actions and reproach the majority in society. And those who call the abuses by name and warn of the consequences for future generations, they have the nerve to defame as racists.

The MiGAZIN is no more a part of Germany than is the Islam of Messrs. Aiman Mazyek and Kenan Kola… the Islam that happily enjoys the freedoms of Western societies, exploits and misuses them without wanting to modernize even a fraction, without being able to suffer even a suggestion of criticism, without being in the least capable of exerting desperately necessary self-criticism.

An Attitude that must lead to Exclusion and Partition

The truth is, no MiGAZIN is necessary, no roundtables, summits and conferences, to integrate millions of immigrants to Germany. Portuguese, Spaniards, Greeks, Italians, assorted Eastern Europeans, even people from Far Eastern lands like China or Japan — they all came to this country and integrated; in the end, not because it was their own aspiration, because they wanted to become part of this society, but out of self-interest exactly as it was in the common interest. Many Muslims have also become part of this society, to their great advantage as well as the advantage of the common good.

These people do not need a MiGAZIN. Just the opposite: it harms immigrants because it encourages an attitude which must lead to exclusion and partition. Those who lament the chance inequality of immigrants would do well to reproach those who are actually abetting (and profiting from) this inequality by preaching an absurd, demoralizing and in the long run destructive social model, whose real face — see Berlin Neukölln — has as much to do with “diversity” and “multiculti” as Islamism has to do with particle physics.

The Sword of the Integration Resister has become dull

I myself am the son of a Spaniard. I have more “southern” relatives than “bio-German.” Even I was accused in the leftist media of being a racist. Because I criticized Islam. Because I personally represent that concept of integration which means sharing, participation and community, instead of advocating exclusion, parallel societies and refusal to integrate like Bozkurt and his ilk. That is why I am called a racist.

Anyway: what was once insufferable now makes me chuckle, sometimes laugh out loud. Buschkowsky, you racist! Sarrazin, you racist! Frank Furter, you racist! Oh, people, that is boring and pathetic. Freely interpreting the saying: Whoever is incapable of argumentation calls others racists. The once sharpest sword of the integration resisters has long since dull. And that is good, damned good.