As noted last night and earlier today, the annual Supplementary Human Dimension Meeting of the Organization for Security and Cooperation in Europe (OSCE) is currently underway in Vienna. A four-person Counterjihad team representing the International Civil Liberties Alliance (ICLA), Bürgerbewegung Pax Europa (BPE), and Mission Europa has been working for the past two days to counter the Islamization of the OSCE. 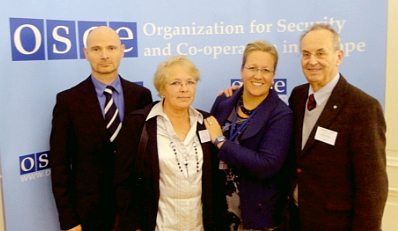 The session’s topic was “Freedom of Association: obstacles to the full realization of this right and ways to overcome them.” The paper below was presented today by ICLA, and has also been posted at the ICLA website.

For decades, it has rightly been assumed that with regards to freedom of assembly and freedom of association, no major problems existed in the OSCE participating states west of Vienna. This was true as concerns state intervention and control, and is to a certain extent still so. However, in several states new radical movements have emerged, movements that violently interfere with the fundamental rights of other citizens, to great extent with impunity from law enforcement. In order to neutralize this undermining of fundamental freedoms, new responses are required.

The freedom of every person to assemble in a peaceful manner and the right to associate are intrinsic to democratic societies and expressly recognized in OSCE human dimension commitments, as well as all major international human rights instruments.

To most citizens of democratic societies, this appears self-evident. However, problems arise when radical groups take it upon themselves to decide which citizens have this right, and which do not.

In practical terms, threats, intimidation and assaults against peaceful assemblies have taken place in several European countries over the last few years. An incomplete list of examples:

The methods employed by the radical groups does seem to have systematic objectives and follow certain patterns. In particular, these methods are worth noting:

Politically, the issues most frequently targeted by the radical groups appear to be discussions about immigration, Islam and national self-determination.

The Annotated Agenda further stresses the importance of freedom of assembly:

Peaceful protests often play an important role in expressing public concerns, reducing the risk that conflicts escalate into violence and providing an opportunity for dialogue with authorities.

On paper, the situation for freedom of association and assembly has seen no major change over the last years, but the reality in our cities is unfortunately different. Small organizations facing numerically superior violent forces in the streets are now reluctant to hold what would otherwise be low-key street events about issues that matter to them. The prospect of possibly facing street violence acts as a severe deterrent to entirely peaceful and democratic organizations, and hampers the democratic process as it has been unfolding over the last decades.

It is worth noting that current laws are usually sufficient to deal with these problems. For example, Article 78:2 of the Constitution of Denmark makes it mandatory for the authorities to dissolve organizations working by means of violence and/or other illegal means. The problems listed in this paper can to a great extent be resolved through proper and just enforcement of existing laws.

As outlined in the Annotated Agenda, this is a positive obligation for participating States:

Yet the main principles underpinning this right are explicit: there should be a presumption in favor of holding assemblies, and the State has a positive obligation to protect peaceful assembly.

Further, the obligation to protect the messages of events is mentioned:

While the freedom to assemble may be subject to reasonable restrictions, these may not interfere with the message communicated by the assembly […]

As an example of how this principle is ignored, it was openly violated by German authorities in Düren, Northrhine-Westphalia on May 8th 2012, where the police protection rendered the actual event largely invisible to citizens in the streets, negating its intended purpose.

It is the recommendation of the International Civil Liberties Alliance that the OSCE participating States pay more attention to the politically motivated intimidation and violence, in order to protect freedom of association, assembly and the democratic process. Quoting the Annotated Agenda:

As the problems for freedom of assembly are increasing, in particular in participating States west of Vienna, ICLA urges OSCE to significantly increase its monitoring activities in these countries. Neutral monitoring and reporting is urgently needed in order that peaceful citizens can safely exercise their right to freedom of assembly, as stipulated in OSCE principles.