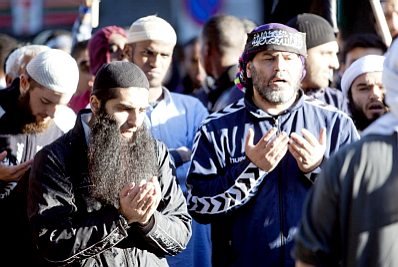 A culturally-enriched fellow named Omar Cheblal, currently living in Norway, is wanted in his native Algeria for gunrunning and terrorist activities. Since he began enjoying the hospitality of his Norwegian hosts in 2006, Mr. Cheblal has joined a Salafist group that is notorious in Norway for threatening to kill politicians and Jews, vowing to establish an Islamic state in Norway, and sending its members overseas to train for jihad and fight in Libya and Syria.

Our Norwegian correspondent The Observer has translated an article about the case of Omar Cheblal, and includes this introduction:

The article from today’s Dagbladet concerns a convicted criminal asylum seeker from Algeria. The individual in question, Omar Cheblal, is a member of the radical ‘Norwegian’ Islamist organization ‘The Prophet’s Ummah’. It turns out that Cheblal’s native country of Algeria has caught wind that he is hiding in Norway and they want him extradited so he can face criminal charges. It should come as no surprise that the Norwegian authorities are reluctant to deport him out of fear that he could face torture if he is sent back home. Or maybe they aren’t all that concerned at all. Maybe it’s just a charade.

The article claims that VG, the newspaper that broke the story, received information from anonymous sources claiming that the Algerian authorities have initiated proceedings against Cheblal in order to get him extradited from Norway. My guess is that these anonymous sources are Labor Party MP’s wanting to bring media attention to this particular case so that they can come across as capable and effective when Cheblal is deported and show the Norwegian public that they are capable of combating radical Islam in Norway. Confidential information is regularly leaked to the media in Norway by members of the elite. All the moral scruples about such practices fly out the window if they think that they will benefit from it. 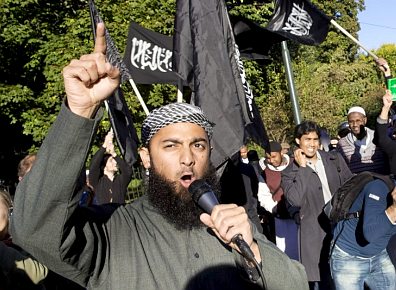 The ‘Prophet’s Ummah’ has received lots of media attention lately and ordinary Norwegians are very vocal in their disgust over the authorities’ feeble attempts at stopping these bearded apes from making very overt threats against Norway, so it’s fair to assume that the politicians feel that they need to show some initiative and score some cheap political points.

However, it doesn’t bode very well that the police and the PST are on the case. Readers of GoV probably remember that a representative from the police in Oslo delivered a very cowardly and disgusting apology in a mosque in Oslo at the height of the unrest over the ‘Innocence of Muslims’ trailer. The fact that neither the police nor the PST has shown any interest in preventing members of this extreme organization from acquiring hunting licenses which will enable them to legally purchase hunting rifles is yet another indication that the intelligence community and the police in Norway are pretty much useless.

Another thing to consider is that for every Cheblal that is successfully deported, ten new ones arrive and are granted political asylum by a very naïve and cowardly government.

The translated article from Dagbladet:

Proceedings have been initiated against Omar Cheblal (46), a member of the organization “The Prophet’s Ummah”, with the intent of having him extradited from Norway.

Oslo (NTB): According to an article in VG [Norwegian tabloid newspaper] Cheblal was arrested in Morocco in the 1990s and sentenced to 15 years in prison for violating the country’s weapons laws. According to the Moroccan newspaper La Gazette, Cheblal was involved in smuggling weapons to the Algerian Islamist organization GIA.

After serving ten years in prison in Morocco, Cheblal was pardoned and released. Shortly thereafter he traveled to Norway, where in 2006 he was registered as a resident at the Vang asylum centre in Valdres. He then relocated to Oslo where he later that year was arrested in the possession of 15.6 grams of hashish. In court he confessed to selling one gram of the drug for Nok 100.

He has been unsuccessful in obtaining a permanent residence permit, but has managed to avoid being sent back to Algeria out of concerns that he could face torture there.

A source with intimate knowledge of the case has confirmed to VG that Cheblal is wanted in his native country and that Algeria has requested that he be extradited from Norway.

“Algeria has requested that he be extradited as he is convicted and wanted in connection with a crime. I am not familiar with the details of the Algerian request,” the source says.

“I’m happy to talk to you about the Prophet’s Ummah, but not about that matter. This is supposed to be confidential information,” says Cheblal to VG.

The Police Security Service (PST) is familiar with the Moroccan verdict, but director of communications of the PST, Trond Hugubakken does not wish to comment.

According to VG’s sources the Norwegian government has initiated an instruction case [direct translation – I’m not familiar with the equivalent English legal term — translator] which will be passed along to the departments responsible for processing asylum applications. This means that Minister of Justice, Grete Faremo (AP-Labour) will make a final decision as to whether Cheblal will be allowed to remain in Norway or not. Her department has the power to instruct the Directorate of Immigration (UDI) and the Immigration Appeals Board (UNE) to expel foreign nationals that pose a threat to national security.

According to official UDI legislation a number of conditions can result in an instruction case such as being affiliated with groups that engage in extremist actions and which are involved in the illegal arms trade.

The Department of Justice does not wish to comment on the matter, but communications advisor, Andreas Lorange says that the government keeps a close eye on individuals arriving from conflict areas.

Involved in a conflict with the mosque

Up until recently Cheblal worshipped regularly at the Islamic Association’s Mosque in Oslo, also known as the Rabita Mosque. According to the leader of the congregation, Basim Ghozlan, Cheblal stopped worshipping there after expressing support for a more radical line during a demonstration in support of the uprising in Libya. Ghozlan also says that Cheblal accused the mosque of being an “ally of the disbelievers.”

“He hasn’t set foot in the mosque since then. Nor has he ever held any official position or had any official duties there,” says Ghozlan.

The PST and the police have joined forces in order to combat radical Islam in Norway. The leader of the organization ‘The Prophet’s Ummah’, Arslan Maroof Hussain, also known as Ubaydullah Hussain, was remanded on Friday for a another two weeks. He is accused of having made threats against Norwegian Jews and journalists as well as embezzling Nok 5 million.

Two other members of the organization, Arfan Bhatti and Mohammad Mohyeldeen are currently in Pakistan and Syria. Both have posted pictures of themselves carrying weapons on social media networks.

8 thoughts on “Wanted in Algeria”