A few days ago we posted a video about last year’s independence march in Warsaw. For any readers who didn’t see it earlier, the same video is embedded at the end of this post.

Several readers wrote to ask for more context about the march. What was the significance of the occasion? Did it have anything to do with anti-EU sentiments?

I asked Green Infidel to write a follow-up report, and the result is below. 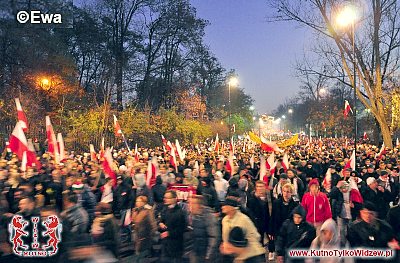 The Story Behind the Independence March in Warsaw
by Green Infidel

The official purpose of the march, was to commemorate anniversary of Poland’s independence on November 11, 1918, and specifically one of the two main leaders of the fight for independence, Roman Dmowski — a Polish nationalist during the inter-war period. For many years, it has taken place on 11 November for this reason, ending at Dmowski’s statue. And for a long time, it has faced an “anti-fascist” blockade by those insisting that the march is fascist.

For the past two years however, the march organisers tried to move into the mainstream by inviting regional folk groups, veterans and politicians such as Janusz Korwin-Mikke, respected across the political spectrum, but with radical socially-conservative, economically liberal ideas which appealed especially to youth and students.

However this was not enough for the leftists opposing the march, who became even more determined to pin the “fascist” label on anyone going. Once the media (especially Gazeta Wyborcza, the biggest Polish newspaper, recently on the Guardian website aligned with other “intellectual left” papers such as The Guardian, Le Monde and El Pais) warned about anti-Semitic slogans and swastikas present at the march, and the “anti-fascists” invited their notorious Antifa friends from Germany, the interest in the march grew — as many people resent Gazeta Wyborcza’s bias and manipulation, and even more the idea of left-wing thugs from Germany coming to call others “fascist”, and disrupt Poland’s independence day (celebrating independence from, among others, Germany).

Many Facebook status messages about the march revolved around “the Germans coming to Warsaw”. And at the march, the first question of some of those who I went with was “where are the Germans?” (I was also thinking this same question!)

However, I think there are also wider reasons for the large attendance. In the two years since the Smolensk crash in April 2010, the atmosphere has become increasingly polarised. On the one hand are the smooth, media-savvy, pro-Western, secular, pro-European liberals (currently in government). Many of them are ashamed of Poland’s traditional identity and think it should become like Western countries.

On the other hand are the traditional, patriotic, religious, anti-EU, anti-Communist conservatives. They believe that people connected to the Communist regime still dominate from behind the scenes (e.g. in the police, secret services, and in much of the media), and that the resulting corruption is holding Poland back, and that political correctness is weakening its cultural identity. They are also despised by the “modernisers”, who see them as “loons”, “backward people” and “religious fanatics” (even though many of them are non-religious or atheist).

The march became a rallying point for the second camp against the first, reflected in some of the slogans chanted: “Down with Communism”, “God, Honour, Fatherland” (a slogan of Polish soldiers during WW2) and — perhaps with the likes of Antifa in mind — “once with the hammer, once with the sickle, hit the red horde” (rhymes better in Polish!).

However in spite of the masses of religious symbols also on display, I didn’t see one anti-Semitic slogan present, let alone “Nazi” symbol, as the papers warned… although least one black disabled student was among those who attended.

If you watch the very end of the original (Polish) video of the march that Vlad subtitled, you will see that at the end there are young teenagers/children, and no police protection. In stark contrast to the leftist blockade, protected by the police on all four sides. After the march, I learned that leftists did at one point attack, and threw rocks at the marchers. However, in the absence of any police, supporters of Legia Warsaw football club got together to provide “protection”, and confronted the leftists. Very quickly the threat subsided, and no leftists got close to the march again.

A note on the background music, I found it’s called “Heart of Courage” by the group Two Steps from Hell.

This is only a brief summary of a day that for me was a watershed moment, showing the scale of media manipulation that really existed.

10 thoughts on “The Story Behind the Independence March in Warsaw”