As everybody knows by now, it was announced earlier this month that this year’s Nobel Peace Prize will be awarded to none other than the European Union.

This can only further burnish the luster added to the Prize when it was presented to Barack Hussein Obama back in 2009.

And indeed it has. But let’s not give up on the much-maligned Prize just yet.

An unidentified entrepreneur has come up with an idea to merge Commerce with the Pursuit of World Peace ’n’ Justice: 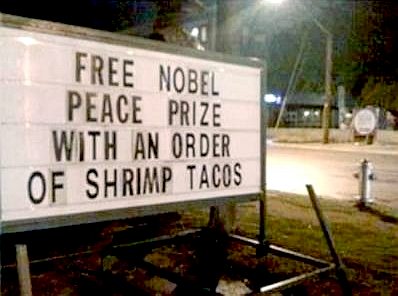 If he’s willing to throw in a free 20-ounce Diet Pepsi, I just might take him up on the deal…

9 thoughts on “Supersize This!”