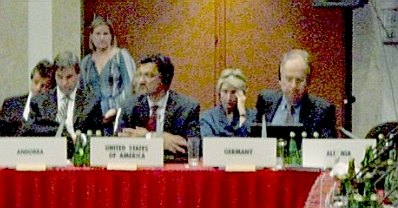 “If we’re going to look at suspects [in the 9-11 attacks], we should look to the groups that benefit the most from these kinds of incidents, and I think we should put the state of Israel on the suspect list because I think this diverts attention from what’s happening in the Palestinian territories so that they can go on with their aggression and occupation and apartheid policies.” — Salam al-Marayati

Salam al-Marayati, the founder of the Muslim Public Affairs Council (MPAC), was chosen to represent the United States government at the OSCE meeting this week in Warsaw. This is not really surprising, given the evident esteem in which President Obama holds the Muslim Brotherhood.

The U.S. Embassy in Brussels so proud of the fact that our government sent an MPAC leader to Warsaw that it bragged about it in a tweet, saying “Much can be done to fight hatred without restricting speech, or prohibiting the ‘defamation of religion’”: 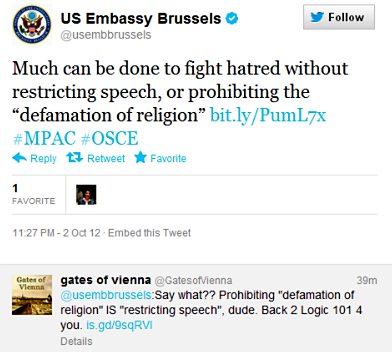 Yet, according to Steve Emerson and the Investigative Project on Terrorism, MPAC is closely allied with the Muslim Brotherhood and has been an untiring defender of terrorist groups in the past:

Far from being the zealous champion of civil rights that it presents itself to be, the Muslim Public Affairs Council (MPAC) has followed a consistent pattern of defending designated terrorist organizations and their supporters, opposing U.S. counterterrorism efforts and spouting anti-Semitic rhetoric.

Given Mr. al-Marayati’s history of accusing Israel of complicity in the 9-11 attacks, American Jewish groups are understandably not happy with our delegation to Warsaw. Below are excerpts from an article in today’s The Washington Free Beacon:

A Muslim leader who said that Israel should have been added to the “suspect list” for the Sept. 11, 2001, terrorist attacks was recently selected to represent the United States government at a human rights conference sponsored by the Organization for Security and Co-operation in Europe (OSCE).

Salam al-Marayati, founder of the Muslim Public Affairs Council (MPAC), was chosen by the Obama administration to deliver remarks in Warsaw, Poland— home to one of the largest Jewish ghettos during the Holocaust—during the OSCE’s Human Dimension Implementation Meetings (HDIM), a 10-day gathering meant to foster the “promotion of tolerance,” according to the group’s website.

Al-Marayati was selected to participate in the confab by the U.S. delegation, which was led by Ambassador Avis Bohlen, a Georgetown University professor and former Clinton administration official, according to MPAC’s website.

The selection of al-Marayati, who has drawn criticism for defending terrorist acts and blaming Israel for 9/11, raised concerns among some observers, who deemed his presence at the human rights meetings offensive.

“It is inexplicable that a person who blamed Israel for the 9/11 attacks and advocated for terrorist organizations, including Hamas and Hezbollah—which has killed more Americans than any terrorist group in the world except al Qaeda—was chosen to represent the United States,” said Josh Block, a former Clinton administration official who now serves as CEO of The Israel Project, a pro-Israel educational group.

Al-Marayati drew widespread criticism from Jewish leaders and others when he said that the U.S. “should put the state of Israel on the suspect list,” according to the New York Times.

“If we’re going to look at suspects, we should look to the groups that benefit the most from these kinds of incidents, and I think we should put the state of Israel on the suspect list because I think this diverts attention from what’s happening in the Palestinian territories so that they can go on with their aggression and occupation and apartheid policies,” al-Marayati told a radio host, according to the Times.

Al-Marayati has also defined attacks by the terrorist group Hezbollah as “legitimate resistance,” according to a report by the Investigate Project on Terrorism.

He was invited to participate in the conference as a “public member of the U.S. delegation,” according to MPAC.

“Al-Marayati was invited as a public member of the U.S. delegation to HDIM along with Professor Ethel Brooks of Rutgers University and Nida Gelazis of the Woodrow Wilson Institute,” MPAC said in a statement.

During his remarks before OSCE participants, al-Marayati said that “hate speech that intends to degrade, intimidate, or incite violence against someone based on religion is harmful,” according to a portion of his speech posted on MPAC’s website.

“The United States is proud to have Mr. Salam al-Marayati of the Muslim Public Affairs Council, Professor Ethel Brooks of Rutgers University, and Ms. Nida Gelazis of the Woodrow Wilson Institute serving as public members in the USG delegation to HDIM,” the embassy said in a statement. “Their expertise will be invaluable in addressing these topics at the meeting.”

One official with a Jewish organization said the embassy’s statement was tone deaf, and demanded the Obama administration explain itself to the Jewish community.

Ambassador Bohlen, the U.S. delegation’s leader, served in the government for nearly 30 years, including in the State Department. She also served as the ambassador to Bulgaria during the Clinton administration.

She did not respond to a request for comment about al-Marayati’s presence on the trip.

This is the fourteenth in a series of posts on this week’s OSCE “Human Dimension Implementation” meeting in Warsaw. More will be coming later this week.

6 thoughts on “OSCE Warsaw: An Advocate for Hamas Representing the U.S. Government”