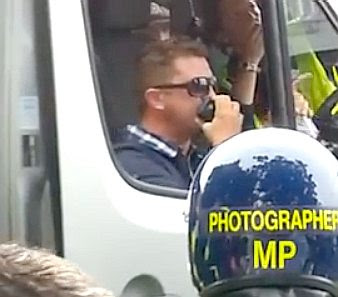 The above photo — a screen shot from a video — shows English Defence League leader Tommy Robinson speaking to his supporters from the window of a police van in Walthamstow yesterday afternoon.

“But, Baron,” you say, “why was Tommy sitting in a police van? Why wasn’t he standing on the platform speaking to the crowd at the demo? Was he arrested? Did he break the law?”

Those are all good questions, and none of the answers reflect well on the Metropolitan Police or the British civil authorities.

Tommy Robinson, a leader of the supposedly ultra-violent EDL, was taken into police custody for his own safety, because the London police were unable to protect him or the other EDL leaders from people who were trying to kill them.

He was not arrested. He broke no laws. The leftists and the Muslims threw bricks and bottles at the EDL, but they weren’t arrested, either.

The police were evidently short-handed, and found themselves unable to protect law-abiding native English citizens from the rampaging violence aimed in their direction by anarchists and Muslims. You’ll notice, however, that the Metropolitan Police had ample resources and staff to take photographs of the EDL demonstrators.

That’s right: they couldn’t protect peaceful citizens from being pelted with bricks and bottles, but they could take pictures of them with the most advanced photographic equipment — photos which will presumably be used against the “fascists” later when the opportunity arises to charge them with a “racially aggravated public order offence”.

That’s what policing has come to in Modern Multicultural Britain. As the British Freedom website says: “Freedom of Speech RIP”.

Here’s the video of Tommy speaking to the EDL from protective custody:

This is a report sent in by an EDL supporter who arrived early in Walthamstow yesterday:


The situation in Walthamstow was an absolute disgrace. There was a huge amount of violence, but only from the Left and Islam.

We were at the meeting point, and there were some 500 Islam/lefties just 15 feet from us. Bricks, bottles etc were thrown, and one line of police which gave way at some points.

All violence came from the UAF and the Muslims, and the police arrested no one.

They kettled the main EDL group away from the leaders. We were outnumbered, the main EDL march told to go home and we did. But it took half the night, and we were detained and searched and warned.

A British Freedom officer at the demo was kettled in with other protesters near Blackhorse Road station until late at night. He witnessed the following:

The cops have changed tactics on us. We were kettled from 1pm till 9.50pm, at which point they arrested all of us on breach of the peace, handcuffed and driven to King’s Cross and then de-arrested.

The demo site was attacked by 300-400 Muslim youths throwing bricks and glass bottles; we weren’t allowed to go near it. A lot of pissed-off EDL right now.

The purpose of the operation seemed to be to demoralize the rank-and-file of the EDL and thus discourage them from attending future protests.

The main group was detained until late at night so that many of them missed their rail connections. Some of them had traveled a long way to get to London, and were stranded:

Got taken to King’s Cross had to make my way to Victoria only to find by the time we were let off the bus and de-arrested the last train home had gone.

I’ve read some reports that Tommy Robinson and Kevin Carroll “abandoned their troops” and left the scene. But this is untrue: they were forcibly separated from everyone else by the police, supposedly for their own protection. I’m told by a reliable source that Kevin stayed up all night in central London taking care of the people who were stranded there.

For a more detailed account of what happened in Walthamstow, including photos, see Skittles Truth UK Blog. As you can see, the UAF intended — and in at least one case, succeeded — in doing major damage to EDL supporters. The man with the nasty head wound was offered no medical care — presumably because the police were too busy taking photographs of “racists” to spare any personnel for such a trivial task.

So it’s come to this. The rule of law has effectively vanished in the UK. Critics of Islam are fair game for the lefty thugs and the mujahideen.

And the police, for that matter.

If you want to protest the Islamization of your country, you can expect no help or protection from the authorities — whose salaries you pay with your taxes.

Nope. You’re on your own.

13 thoughts on “The Failure of the Metropolitan Police in Walthamstow”