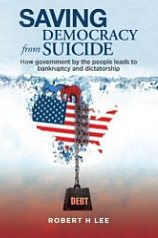 Saving Democracy From Suicide is a brave book about what has become a very controversial topic in the modern West. We live in an age when merely asking some modestly critical questions about democracy or universal suffrage, which even the ancient Greeks never had, is seen as a sign of “Fascism.” But serious thinkers throughout European history, from Aristotle to the American Founding Fathers, have always been able to spot flaws in pure democracy. It is not rational to place this system above debate now.

It is important to stress that this book does not claim that democracy is exclusively “bad.” Rather, it argues that democracy, like all human systems, is flawed since it was made of flawed human beings. In order to safeguard the best features that a democratic system may have and sometimes does have, we must also rationally deal with its potential weaknesses.

Perhaps having some democratic element of genuine influence and power is both good and necessary in a healthy political system, in order to counterbalance an always present potential for cruelty and despotism among unaccountable rulers. In the case of the European Union, one could for instance argue successfully that it is precisely the near-total lack of democratic accountability in the system, apart from the weak European Parliament, is one of its critical flaws, that makes the EU less free than Switzerland, which has a substantial element of direct democracy through the frequent use of referendums. The author might have benefited from analyzing this line of thinking a little bit more.

The strongest section of the book links potential flaws inherent in the democratic system to the observable problems experienced by many democratic states today. At the time of writing, most Western democratic countries are witnessing an escalating debt crisis that is threatening to spiral out of control and cause serious social unrest.

Admittedly, several possible causes for this may be highlighted. One of them is arguably a system of financial speculation by a few powerful players who are unfairly bailed out by the taxpayers and central banks when they get themselves into trouble, instead of facing the consequences of their own actions, as they should do in a capitalist system.

However, is it possible that some of the present debt problems are caused by flaws in the democratic system itself? Lee argues that it is, and he can be quite persuasive when doing so.

Ever since the time of the ancient Greeks, critics of pure democracy have pointed out that the productive and dynamic will always be outnumbered by unproductive and lazy people. If all adult males and females have the vote, this means that a majority can vote itself into the possession of the money of a dynamic minority. Does this mean that a democratic society will have a built-in tendency to move in the direction of Socialism? Perhaps.

Another inherent flaw in the democratic system that has always been commented upon by critical thinkers is its short-term focus. Too few people in positions of power will think more than one or two election cycles ahead, that is, maybe five to ten years. By contrast, it ironically appears to be easier for some non-democratic societies to plan ahead for generations, and to think about what will be good for their country 50 or 150 years from now.

How to solve these problems? This book does not provide all the answers to this question although it does provide a few practical suggestions. Yet Robert H. Lee courageously asks some difficult but necessary questions about whether the Western political system is functioning as intended today.

We would be wise to seriously consider some of the issues he raises in this text. Those of us who want to preserve the best components of a democratic system have to face up to some of its flaws as well; otherwise we risk seeing a collapse of the entire system at some point. There are already a few warning signs that we are moving in just such a direction.