In a translated essay posted earlier tonight, the German writer M. Sattler described the origins of the permissive attitude towards the Turkish Muslim extremists who make up a group known as the “Gray Wolves”.

The following article by Felix Strüning outlines the statistical evidence for the increasing alienation of resident Turks from mainstream German culture. Surveys of German Turkish attitudes demonstrate the ineffectiveness of the multicultural model for the “integration” of Muslims in Germany. Not only has Multiculturalism failed to make Turks an integral part of German life and culture, it has manifestly increased the separateness of the German Turkish community.

This piece was published last week in Citizen Times. See the original article for the accompanying graphs and footnotes. 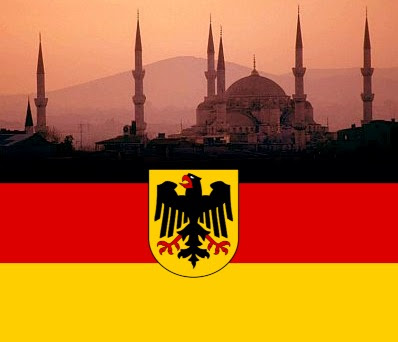 Turks in Germany 2012
Study on German-Turkish life and values

According to a study by the Interior Ministry in 2009, Germany is home to around 4.3 million Muslims, which equates to a population share of 5.2 percent. About 45 percent of them have German citizenship. The largest group of Muslims, consists of just under 2.7 million people, of Turkish descent. A recent poll by Information GmbH has investigated their German-Turkish life and values for the third time in detail.

Regarding the respondents’ attitudes toward Germany and Germans, at least in terms of the stated desire for integration, a positive development can be seen: After all, 78 percent (2010: 70%) are willing to “integrate absolutely and without exception into German society.” At the same time, 95 percent of the Turks in Germany (TiG) find it important to preserve their Turkish culture in Germany, and 87 percent (2010: 83%) think that Germans ought to be more considerate of the particular circumstances of the Turks.

On the other hand, there are clear trends of separation and Islamization: 62 percent of TiG (1.5 times as much as in 2010) would prefer to be together exclusively with Turks. Also an indicator of poor integration motivation is the 46 percent who said they would leave Germany if they wouldn’t receive aid money in the case of unemployment (see Figure 1).

Increasing numbers of Turks want more mosques (55%); among 15- to 29-year-olds, up to 70 percent want more mosques. Moreover, almost half of the TiG hope that there will be a Muslim majority in Germany soon. Also, the number of those who believe that Islam is the only true religion has increased (see Figure 2).

The devaluation of different ways of life has also increased slightly: almost a fifth of the TiG consider atheists to be inferior human beings; this figure is up to 30 percent among the youngest respondents. Also, anti-Semitism has increased (see Figure 3). Additionally, more than half of the respondents think that homosexuality is a disease, and 73 percent reject it.

Immigration and sense of home

39 percent of TiG fell more at home in Turkey and only 15 percent in Germany. Solely 23 percent have German citizenship. About half of the TiG want to remain in Germany, a slightly increased proportion consider returning to Turkey. Specific discrimination in the form of verbal abuse has been experienced by up to 29 percent (2010: 42%), and 16 percent (2010: 8%) have experienced physical assault because of their Turkish appearance.

In comparison to the German population, the Turks living in Germany perform very poorly in general education: 57 percent of those surveyed have no high school diploma or only attended a secondary modern school (Hauptschule). Throughout Germany, only 40 percent of the population do not have a high school diploma or only secondary schooling. Solely educational trends could be regarded as somewhat optimistic because the proportion of younger TiG without diplomas or only secondary schooling has decreased to 45 percent.

In addition, 40 percent of Turks in Germany have no professional qualifications (27% is the German average), which is important for successful participation in working life. Over two-thirds also indicate that they speak better Turkish than German; among women, this figure is almost 75 percent. Accordingly, only 47 percent of those surveyed (men: 56%, women: 39%) are fully or partially employed. In comparison, 58 percent of the German population do have jobs.