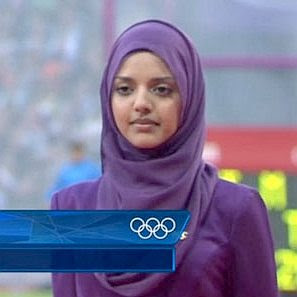 Brazilian Infidel emailed us yesterday to say, “Have you noticed that the girls who held the medals and flowers at the Olympics don’t exist anymore? Now they are boys.”

Well, I hadn’t. We don’t have a TV, so he sent us some screen-capped images of the television coverage. Sure enough, the flower girls have become flower boys: 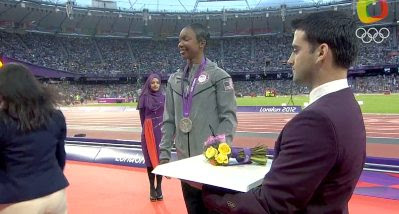 The photo below shows the victory ceremony. In addition to the flower boys, you’ll notice that one of the three women in the ceremony is a young Muslima in hijab:

A close-up shot of her is at the top of this post. Interestingly enough, although she is wearing a headscarf, she otherwise seems to be dressed in shameless kafir garb, with a knee-length skirt and dark stockings.

She was officiating when Mohamed Farah (UK) was awarded the gold medal for the men’s 10,000 meter run: 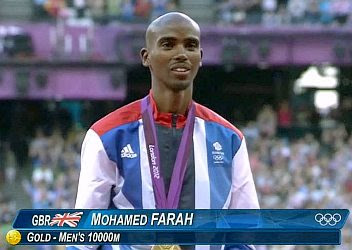 The screen-shot below was taken during the victory celebration for Greg Rutherford, the British long jump champion.

The long-bearded security guard at the right (and below) is a reminder of what that child-abusing imam told his charges in the madrassa (was it in Blackburn?): “Never trust a man unless he has a fistful of beard.” 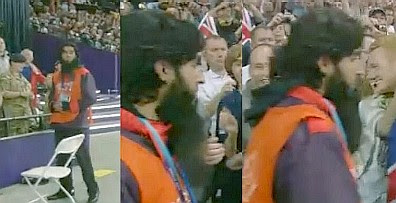 Well, this fellow must be very trustworthy.

I wonder what he thinks of all those lascivious infidel women among the spectators? Especially the one in the stands who embraced Mr. Rutherford after his victory.

22 thoughts on “The Face of the Olympics”