The following guest-essay by Nick McAvelly of The Frozen North discusses the candidacy of Kevin Carroll for police commissioner in Bedfordshire, and what it might portend for the future of traditional civil liberties in Britain. 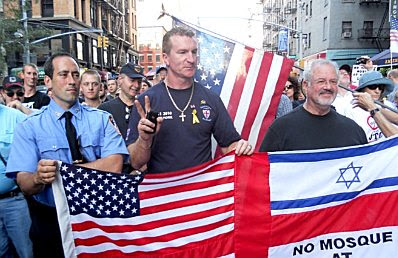 It may well be that the most glorious chapters of our history have yet to be written. Indeed, the very problems and dangers that encompass us and our country ought to make English men and women of this generation glad to be here at such a time. We ought to rejoice at the responsibilities with which destiny has honoured us, and be proud that we are guardians of our country in an age when her life is at stake.

As each day passes it becomes clear that the responsibility of protecting our nations and societies from internal disintegration has passed to the hands of individuals, often working alone, who refuse to accept the degradation of their societies and so fight with the innovative tools of liberty to protect our way of life.

An Englishman’s mind works best when it is almost too late.

Our grandparents knew what it was like to fight for our nation’s survival, but most people today have no conception of what it is like to be at war. Although, as a nation, Britain fought to defend the Falklands, and many British troops are currently fighting abroad, the experience of war is so alien to most that we find it hard to accept that the safe, comfortable way of life we know could be under threat.

This reluctance to accept that a threat to our own way of life exists is sometimes called a “normalcy bias”. If we don’t know what something is like, then we find it difficult to imagine. Unfortunately, no matter how much we’d like to deny it, the way of life our grandparents fought for is under threat. And we are the only ones who can do anything about it.

One of the leaders of the English Defence League, Kevin Carroll, intends to stand as a candidate for police and crime commissioner for Bedfordshire.[1] If he is successful, then the authorities in that area will have to start listening to some of the legitimate grievances of the British working class today.

Politicians today don’t care about the British working class. They don’t listen to us; they hold us in contempt. And that needs to change, because at the end of the day, we don’t work for them — they work for us.

Gordon Brown, in a speech at Ealing Town Hall in November 2009, stated that immigration was not a taboo subject, the issue is at the heart of British politics today, and politicians who responded to questions from the public on this topic by engaging in fallacious ad hominem attacks against them — which does not address the matter at hand — were practising what he called “lazy elitism”.[6]

Gordon Brown didn’t take long to show his true colours. While on a “walkabout”, a pensioner asked the PM about taxes and immigration. Brown gave a mealy-mouthed answer, and was heard afterwards describing her as “just a sort of bigoted woman” who “used to be Labour”. Brown later tried to excuse his behaviour by saying: “It was a question about immigration that really I think was annoying.” [7]

This is at the core of a lot of our problems today. No matter what they might say to get us to vote for them, politicians in Britain today see legitimate questions raised by working-class people as inconvenient and “annoying”. Instead of dealing with their interlocutor in an intellectually honest manner, they attack the person who put the question to them — they shoot the messenger, so to speak.

When anyone from the working class stands up today and speaks about some of the very real problems which have arisen as a consequence of the British government’s secret implementation a policy of uncontrollable immigration and enforced multiculturalism,[8, 9, 10] they’re persecuted for doing so. They are subjected to ad hominem abuse by politicians and the press, they are harassed by the police, they can lose their jobs, and can even be prosecuted in a court of law.

The distance between working-class people in Britain and the political class has never been greater, and it’s felt throughout the country. The Joseph Rowntree Foundation spoke at length with people living in what they called “white working class” communities in Birmingham, London and Coventry as part of a study conducted in 2011.

Those were not “white working class” communities at all; there were significant numbers of immigrants living there, they have been the targets of government funded “community cohesion” programmes, and their local councils, in which the immigrant populations were well represented, ignored the concerns of the white people living there.

It’s more accurate to say that the Joseph Rowntree Foundation went into areas that had been affected by ideologically driven social engineering policies, where immigrants were automatically given priority in every meaningful way over native Brits of English, Scottish, and Irish extraction, and where everyone living there who was working class and happened to be white was systematically marginalised and ignored. The researchers talked to the victims of those government policies.

The researchers were told time and again that working class people share the following values: a strong work ethic, respect for themselves and others, collective values and reciprocal support. In academic language, the report states that “participants across study areas emphasised a framework or code of working class principles. In this way, identity could be maintained. People could understand, in a common sense way, that they were similar.” [11]

The researchers eventually realised that working class identity is based not on skin colour at all, but on working class values which “some newcomers might not share”. [12]

British politicians need to start listening to British citizens. David Cameron was right when he said that we must embrace an “active, muscular liberalism”.[13] If those were more than empty words from our Prime Minister, then at an absolute minimum, that must mean that freedom of speech will now be encouraged in the United Kingdom.

John Stuart Mill wrote that silencing a dissenting opinion is “robbing the human race”, because if that opinion turns out to be right, then people are deprived of the opportunity to exchange error for truth.[14] Mill wrote that “the opinion which it is attempted to suppress by authority may possibly be true. Those who desire to suppress it, of course deny its truth; but they are not infallible.” [15]

Playing devil’s advocate, Mill argued that governments must act to the best of their ability because “There is no such thing as absolute certainty, but there is assurance sufficient for the purposes of human life. We may, and must, assume our opinion to be true for the guidance of our own conduct: and it is assuming no more when we forbid bad men to pervert society by the propagation of opinions which we regard as false and pernicious.” [16]

Mill responded by saying: “I answer, that it is assuming very much more. There is the greatest difference between presuming an opinion to be true, because, with every opportunity for contesting it, it has not been refuted, and assuming its truth for the purpose of not permitting its refutation. Complete liberty of contradicting and disproving our opinion, is the very condition which justifies us in assuming its truth for purposes of action; and on no other terms can a being with human faculties have any rational assurance of being right.” [17]

What the British Freedom Party and the English Defence League are doing is speaking the truth about what working class people experience in Britain today. About a two-tier system of justice, and how the forces of law and order behave towards British citizens.

The British Freedom Party and the English Defence League are also speaking the truth about the doctrines of Islam, and about its history. The facts of the matter are accessible to everyone who cares to find out: There are books on the history of Islam that are accessible to everyone, by respected authors like William Montgomery Watt, Hugh Kennedy, Ernle Bradford, Roger Crowley and so forth. And one of the best ways to find out about Islamic doctrines is to actually read for yourself the foundational texts of Islam: The Koran and the hadith.

If anyone takes the time to do their own research, instead of relying on politicians to tell them what to think, they’ll soon realise that what we have been saying about Islamic doctrines and history is the truth, nothing more and nothing less.

The authorities have prosecuted several British citizens, or threatened them with prosecution, under Section 5 the Public Order Act 1986, which criminalises the use of “insulting words”. This relies on the subjective term of “feeling insulted”. Clearly, the threshold of criminalisation has been set too low in this piece of legislation. The civil rights organisation Liberty believe that Section 5 has “a chilling effect on free speech”. According to Liberty, this legislation is part of a trend “to so restrict the freedom to protest that it either silences dissenting voices or minimises or eradicates their effectiveness.” Liberty believes that Section 5 of the Public Order Act should be repealed.[18]

It follows that, according to the very legislation being used to “silence dissenting voices”,[20] there is no reason for the police to waste any of their finite resources penalising working class people for giving voice to legitimate concerns about Islam in Europe today.

After the sacrifices British men and women made during the war, we shouldn’t be living in a state now where people are afraid to speak their minds, where the police and the press are lackeys of a political elite wedded to an unworkable political ideology which they themselves have declared a failure. But we are.

If the values that our grandparents fought for, the values that British working class people still hold today, are not only being abandoned by the British authorities, but actively undermined, if people are afraid to say what they think about Islamic doctrines and its history for fear they will be prosecuted, then the values and way of life which our grandparents sacrificed so much for is under attack. And we are the only ones who are able to do anything about it.

We need to insist that people in positions of authority do not “shoot the messenger” whenever they hear someone speaking about the doctrines or history of Islam but instead, do their jobs properly and address the legitimate concerns of all members of society — that includes working class people from Luton!

Police resources shouldn’t be wasted on prosecuting working class people who are speaking the truth — about anything. If we can put Kevin Carroll in a position where the authorities have to listen to what the British public have to say, we can tell the police that they can finally go back to catching bad guys. The police have finite resources, and they should be concentrating on doing good old-fashioned police work.

If we really believe in democracy and freedom of speech, then we need to do everything we can to elect one of our own into a position where he can say what needs to be said, and where the powers-that-be will have to listen. If we really want things to change, then we need to get behind Kev Carroll and help him to raise his deposit, so he can stand as a candidate for PCC for Bedfordshire.

5 thoughts on “Saying What Needs to Be Said”