A small town in southern Sweden has experienced a wave of particularly destructive vandalism by “youths”. No one has any idea about who might be doing these things, or why.

Our Swedish correspondent PMP has written a report based on a news article in Jnytt.se. 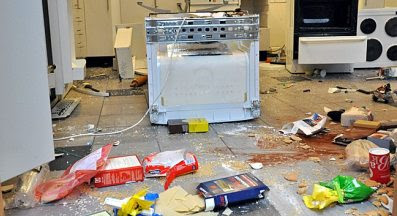 This is a mystery, according to Swedish media. Someone has destroyed a youth center, but no one has the slightest clue about who could be behind it.


Mysterious vandalism in Sweden
by PMP

The mess shown above happened just recently to a youth center in a small town in the south of Sweden named Huskvarna. What we do not learn from the official article is that there is a heavy presence of immigrants in the specific area where this took place (Öxnehaga), with around 34% of inhabitants who live in the area being immigrants.

From the official local newspaper Jnytt.se we learn that the staff arrived at the youth center after the weekend. On Monday it was more or less completely destroyed.

Christer Zachrisson, who works at the center, says: ‘I have worked in youth centers since the 1980s, and never seen anything like this. What kind of people do something like this?’

Apparently some people had broken into the premises between Friday night and Saturday morning and destroyed most of the center. They had also stolen the balls from billiards game, which they used to have fun and break all the windows.

The vague speculation continues, with a local woman who says, ‘Someone sought to destroy our things. And they have been successful.’ The main article, however, quickly reinforces the party line: ‘We suspect everyone to be guilty of this. We cannot say exactly who did this,’ as Zachrisson expresses.

A local official explains how area residents have helplessly watched as a continuing wave of destruction has taken place throughout the whole summer. Broken windows, uprooted flowers, broken lights, etc. ‘It just feels hopeless at this moment,’ he says. He is not able to venture a guess, however, at the forces behind these developments.

Now, even if there were evidence of immigrant youth being the perpetrators (I could bet money that they where, too), what would happen? Through the rhetoric of Swedish politicians and Swedish Media, we have for years learned that there are many oppressed youths in Sweden. They have an immigrant background, and therefore face structural racism from Swedes and from Swedish society at large.

If they face this discrimination, this racism, they simply make human ‘outcries’ such as shown in the picture above.

5 thoughts on “Mysterious Vandalism in Sweden”