Over the past few days, when I really should have been working, I spent a few hours making graphics, which is what I love to do more than anything else. I’m not sure if these images will ever be relevant to any particular post, so I’ll just put them here, where readers can see them — and steal them, if they seem useful to you.

The first one is a modified version of the notorious photo of Barack Hussein Obama with his head obscured by a teleprompter. For anyone who hasn’t already seen this moving and iconic image, it may be found here.

Just for fun, I altered the photo to reveal its underlying truth: 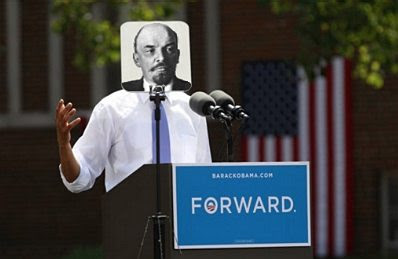 The second image is less jocular. It depicts a revenant figure of evil, a shade returned from the pit to glower at us all as the Twelfth Imam climbs out of his well: He may be part of Comrade Obama’s October surprise. Or — if you’re a devotee of the Mayan Long Count calendar — he may appear at the end of the thirteenth b’ak’tun, on December 21, 2012. Or some combination of the above.