Our London correspondent Eastender sends his take on the state of denial among leftists concerning the attitude of British Muslims towards gays (and all other infidels, as well).

His post is based on an anti-Islamophobia opinion piece by Owen Jones in The Independent. 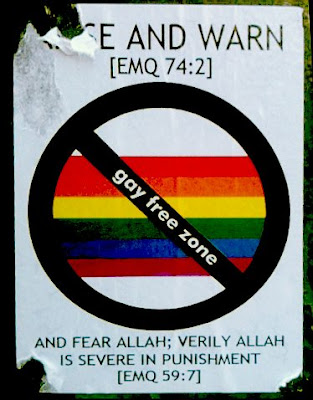 Owen Jones, the UK’s (self-appointed) clown prince of left-wing journalism has sided up with the UK’s Muslims against the daily, ferocious attacks they suffer from internet ‘trolls’ as well as the fear and alarm generated amongst them by the activities of the EDL and the BNP. Further, he points to the rise of political parties in Europe who have an anti-Muslim stance.

He explains out that most Muslims are just getting on with life and that they should not be blamed for not taking on the extremists within their midst. Well, some of them do, in a mild way. But the plain fact is that without the one we would not have the other.

Like those before him, Jones is stridently sanctimonious, knows theory rather than the practice, and never lets facts get in the way of his assertions. He is part of the commentariat: people with opinions rather than a grounding in journalism. In this he is joined by the now disgraced Johann Hari and Laurie Penny, his fellow commentator in The Independent. At last, a publication that scrapes even further into the bottom of the barrel than The Guardian!

The fact that he can rail away against anti-Muslim prejudice while completely ignoring the impact of the huge increase in the Muslim presence in London on the lives of gay men shows just how one-eyed he is. For Jones is gay.

I wonder if he has done any ‘reporting’ in Bethnal Green, Whitechapel or Spitalfields recently? Nope, not a single sign. He will find out that in such areas the Muslims have their own form of ‘Pinkwashing’ which ensures any resident or visiting gays are scrubbed away from the sight of ‘the faithful’. And, as one Independent journalist — Jerome Taylor — found during the 2010 general election, Muslims do not take kindly to journalists prodding around on ‘their’ territory. But that attack was allowed to enter the dustbin of history and never followed up because it sat rather inconveniently with the ideology of The Independent.

The ‘faithful’ have clearly got their eyes on Walthamstow, for just today I saw Jamaal Uddin being driven in a car — by A WOMAN!!! — on St James Street in Walthamstow. This was the convert clown who pasted up the ‘You are now entering a Sharia controlled zone’ leaflets around Walthamstow last year, and who is now involved with the group who are attempting to put this into practice, as previously posted in Gates of Vienna.

What has not been reported anywhere else were sightings of lead jihadist Anjem Choudary in the southern end of Coppermill Lane early last autumn. Dressed in Western clothes, and carrying a briefcase under his arm, he had been visiting ‘someone’ in the area. Now, Choudary does not make such trips for social reasons. So, it was no surprise to see the increase in jihadist activity in the area. Things are hotting up in time for the EDL’s visit to Walthamstow in August.

The title of this essay is an oblique reference to 1972’s ‘Me and Mrs. Jones’ by the American soul singer Billy Paul.

9 thoughts on “Hotting up in Walthamstow”