The Israeli journalist Alexander Maistrovoy returns with an analysis of the current violence in Syria as a reflection of events in Central Asia and the Caucasus more than two decades ago.

Under Islam there are only two choices: murderous chaos, or a strongman. The people of the region understand these choices all too well, but the well-meaning busybodies in the West do not. Pushing the peoples of the Middle East into “democracy” means ushering in a reign of fire and blood and rape and slaughter. No other outcome is possible once the rule of the despot is destroyed. 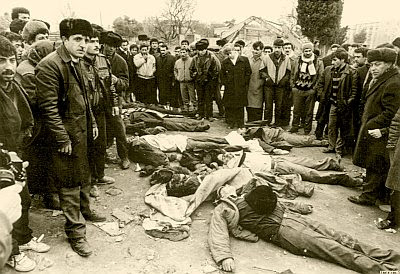 Syria does not want Bashar al-Assad. However, does it want… Hafez al-Assad?

A quarter of a century ago the people of Central Asia and the Caucasus also tasted freedom. It was the taste of blood.

“The first task of the historian is to make a careful sketch of the manner in which the events he recounts took place. The history of religious beginnings transports us into a world of women and children, of brains ardent or foolish. These facts, placed before minds of a positive order, are absurd and unintelligible, and this is why countries such as England, of ponderous intellects, find it impossible to comprehend anything about it.”

This is how Ernest Renan[1] described the way in which the psychology of people in the time of Jesus was frustratingly misunderstood by English philosophers.

Replace “England” with “the West”, ancient history with modern times, and you’ll understand the fatal error in the assessment of the events in Syria.

One glance at the commentaries on current events in Syria reveals that they were dictated by the same person. The similar expressions and identical evaluation: “democratic forces” on the one hand, and the “repressive regime” on the other; the “revolution” against “the bloody dictatorship”; “freedom” against “tyranny”.

It is a very simplified, schematic picture. It does not explain much, and does not attempt to explain. Why, even after the massacre in Houla and Hama, don’t we see mass defections from the Syrian army, although lower-ranking officers and soldiers are Sunnis and representatives of other minorities? Why don’t they swing to the Free Syrian Army? Why haven’t the resistance and the mass protests spread to Damascus, even though its population consists of 90% Sunnis? How can one explain the neutrality of the Kurds (not second-, but third-class citizens!), and the Druze? What is the Free Syrian Army?

It is evident from the news reports (including unofficial ones on YouTube) that the militants have no shortage of weaponry (including RPGs and heavy machine guns) and ammunition. Who supplies the arms and ammo to them? Finally, there isn’t any evidence that the massacre in Houla and Hama was accomplished by special units deployed by Assad. Can we rule out the possibility that the infamous gloomy “Račak massacre” repeats itself?

I’m not going to whitewash the Assad regime. But what is in fact happening in this country? Have the Western clichés become a reality?

We are called upon to reject “ill-founded fears”. After all, “the situation could not be worse than it is in Syria now anyway” believes Lee Smith (The Weekly Standard). This is a typical example of Western optimism and naivety. I’m sure that it could be worse, much worse, because I know how violence and hatred in the East can spiral when the regime loses power.

… In the middle of the 80s Uzbekistan was the epitome of a “New Historical Community” — “Soviet People” (a type of “multiculturalism”) with a diversity of nationalities peacefully coexisting side by side with one another. However, in the late 1980s the firm grip of the regime had weakened, and in May 1989 the dormant fervors sprang forth.

The first victims were Russians; the second were Meskhetian Turks that were transferred there from the Meskheti region of Georgia by Stalin in the 1940s. This massacre entered history as the “Pogrom in Fergana Valley”. We still do not know how many Turks were slaughtered. Armed with crowbars, pitchforks and axes, the crowds burned alive, dismembered and raped people under the slogan “Uzbekistan for Uzbeks”, “Strangle the Turks, smother the Russians”, and “Long live the Islamic flag”.

“Snapshots-testimony of debauchery (in Fergana), of madness and sadism: a burnt corpse; a murdered man and a teenager (probably father and son) and a bludgeon — the murder weapon; the mutilated corpse of a woman, thrown into a ditch; burned-out houses. …Approaching Kokand …we saw pillars of black smoke and then bright torches of burning houses. We were able to distinguish angry faces, sticks in hands… They were thugs 25-30 years of age. They threatened us with fists and bludgeons; others tossed stones at the helicopter with impotent rage. We saw how they dragged Turkish girls from the buses and raped them. We saw how they threw a Russian man from the roof of a house …and then burnt him alive …” [2] (Resembles Syrian “sketches”, or doesn’t it?).

The pogroms recurred in June 1990 in Osh (this time the Kyrgyz were the victims), and again in Namangan in 1991. Mass atrocities ended only when Islam Karimov, the current president of Uzbekistan, came to power and suppressed the mad crowds with an iron fist. Since then Uzbekistan has been a stable country with many people coexisting peacefully. When the 1997 riots renewed in Namangan, Karimov rigorously suppressed them again. The West rushed to accuse him of violation of human rights without realizing that if he hadn’t done it with maximum determination and force, there wouldn’t be any “human rights” — or humans — left in Namangan in particular, and in the country in general.

In Kazakhstan in 1986 the nationalists attempted to settle old scores with the Russians by a pogrom in the center of Alma-Ata. A large crowd armed with sticks and stones in demanded that a Kazakh native be elected the First Secretary of the Communist Party. Many were killed and hundreds injured as a result of the pogrom. The period of turmoil ended when the current President Nursultan Nazarbayev came to power. Since then Kazakhstan has been a prosperous and rapidly developing country. Like Uzbekistan, it is not a liberal democracy, but people who live there have the basic rights — the rights to life and feeling of security.

Events in Tajikistan evolved in a similar matter. In February, 1990 crowds of rioters, screaming “Death to Armenians”, destroyed the homes of Armenians and other minorities. Arson, mass murder, and cruel rapes swept Dushanbe. Life was paralyzed. Rioters burned people in their own homes, caught them, tortured them to death, raped girls and women and in the end murdered them. The country was blazing for several years until Emomalii Rahmon took power into his hands in 1994. Since then, Tajikistan has rarely been mentioned in international news reports. Life went back to normal in the country.

Pogroms of Armenians, provoked by the Karabakh conflict, swept Azerbaijan in 1989-90. First there was the Sumgait in February 1988. “Thugs broke into previously marked apartments. Armenians were killed in their own homes, but sometimes they were pulled out into the streets or into the yards for public mockery. Only a few were “lucky” to die from an ax or a knife. Most died in painful humiliation and suffering. Murderers pounded them, tormented them, doused them with gasoline and burned them alive. Gang-rapes of women and girls occurred, often in front of their relatives. Eventually the torturers killed their victims. They had mercy neither for old men nor for children”. [3]

“I saw dismembered bodies with my own eyes; one body was chopped with an ax; legs, arms were chopped off from the body — almost nothing was left. They (murderers) collected leaves from the ground, tossed them over the corpses, then poured gasoline from cars and fired them up. These bodies looked horrible,” wrote the British journalist Thomas de Waal. [4]

Pogroms resumed in Baku in 1990. According to de Waal, an area densely populated by Armenians, turned into a scene of mass murder: people were thrown from the balconies of the upper floors, lynched, and burned alive. Rape was accompanied by sadism and barbarity.

The period of instability ended when Heydar Aliyev, a tough and dodgy politician, came to power, and subsequently handed over authority to his son — Ilham Aliyev. Now Azerbaijan, like other Central Asia republics an authoritarian regime with quasi-democratic institutions, is regardless very popular among the people, because it provides the main thing that they need — security, stability and tranquility.

The Middle East is not that different from Central Asia and the Caucasus: there are same unwritten laws and rules. An example of this was the massacre of Christians by Palestinian militants in Damour (Lebanon) and retaliation in the Sabra and Shatila by Christian Phalangists. Similar things are occurring in Libya today. We have yet to see a repetition of the atrocities in Iraq, Egypt, Yemen and elsewhere, where the regime is unable to restrain the instinctual brutality of the crowd.

Alas, as politically incorrect it may sound, the Middle East and the Central Asia (excluding the fiasco of the Ataturk experiment in Turkey) have always known only two forms of existence (I emphasize — not the reign, but existence): the domination of crazed mobs or despotism (in the form autocracy, military junta or theocracy). There is no other choice, and there never will be. Without any doubt the second form of existence (with all its flaws) is to be preferred, because it sets rigorous rules for the game and allows the mass of ordinary people to survive.

The Syrians are very well aware of this eternal order of things. I think they would prefer Hafez al-Assad’s tyranny to empty and meaningless declarations about “revolution,” “democracy,” “liberal values”, and “human rights”.

15 thoughts on “The Taste of Blood”