We’ve posted previously about the Austrian defense minister Norbert Darabos and his blasé attitude towards the Iranian regime’s stated ambition to annihilate Israel.

Our Austrian correspondent AMT, who recommended the translation of the following essay about Mr. Darabos, has this to say:

Christian Ortner, a well-known Austrian opinion writer, has once again taken on the Austrian defense minister who doubles as cameo-foreign minister. This time Mr. Ortner ponders Darabos’ anti-fascist stance, wondering if the minister even knows what fascism stands for.

The translated op-ed from Die Presse:

67 Years After the Fall of Fascism, What is an “Antifascist”?

An antifascism that whitewashes the threats of Islamofascists against Israel has degenerated into the vainglorious, ideological, completely useless pose of “Never forget” 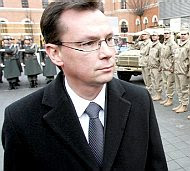 It was a noteworthy argument Norbert Darabos used recently to answer the accusation that he had downplayed Iran’s ambitions for the nuclear annihilation of Israel (“Israel is apparently pushing external enemies to the forefront to distract from social problems”).

In his own defense, the SPÖ [Socialist Party of Austria] defense minister let it be known through his office that he was a “pronounced antifascist” (in a letter from the ministerial office to The Jerusalem Post). His heroic declaration of allegiance to Antifascism vintage 2012 — that is, only 67 years after the fall of fascism in Europe — must not be undervalued. Of course, the German painter and thinker Anselm Kiefer noted about such cases: “At a time when it costs little to be ‘anti-anything,’ you can’t lay claim to a word that was only meaningful in a time when it was worth your life to be antifascist.”

True. But then, it was not so long ago that “pronounced antifascists” were not represented in one-party socialist regimes, but former Nazis and SS men with a party card from the SPÖ (Social Democratic Party of Austria) were. And contrariwise, proven antifascists like Simon Wiesenthal were not highly valued.

Seen that way, Mr. Darabos’ “perfect” antifascist mindset is certainly a kind of progress, at least for local social democracy. Nonetheless, it is a bit strange that antifascism, as practiced in the SPÖ minister’s milieu, protects only dead Jews from largely dead fascists and Nazis, whereas this contemporary antifascism thinks nothing of whitewashing, relativizing and in the end smoothing the way for Teheran’s officially announced plans to carry out a second Holocaust on Jews who are still alive.

The pathetic chanting of “Never forget” with which leading social democratic antifascists mutually certify the purity of their antifascism at antifascist celebrations does not prevent this type of leftist antifascist, in isolated instances, and with an appropriate opportunity, from making common cause with Palestinian groups who have a stated goal of completing the total annihilation of the Jews, which had been left partly undone by the Nazis.

But an antifascism reduced to a facile pose which has no effect on reality — for instance, in regard to the Islamo-fascist threat to Israel from Iran — can hardly claim moral superiority. Such an antifascism, which does not or will not see the new fascism, even when the new fascists make their intentions clear, has degenerated into an pretentious catch phrase — as substantial as the contents of a balloon without its cover. Even with the banner “Never forget,” it is possible to distort your view of reality, if you put a value on that.

The German political scientist Manfred Funke once scoffed that antifascism is “an all-purpose weapon with a tendency to blend.” Norbert Darabos has just demonstrated the truth of that assertion.

2 thoughts on “Blind to the New Fascism”