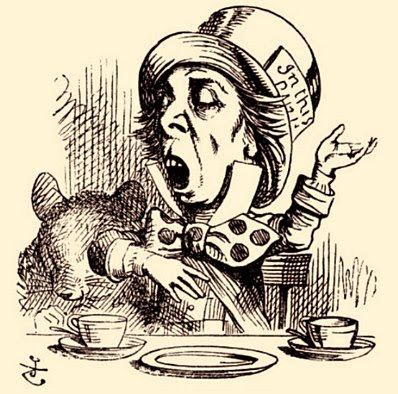 The accusation of “censorship” in our comments recurs from time to time. The issue is as old as the conflation of liberty with license.

Some people seem to think that unless they can say whatever they want to say, to anyone, anywhere, any time, under any circumstances, then their “freedom of speech” is being violated.

This is, of course, nonsense. But the accusation of “censorship” keeps cropping up, despite my earnest and repeated attempts to refute it. Two would-be commenters whose comments were not approved hurled it at me tonight.

So I will repeat myself one more time: “Censorship” cannot possibly occur here, because this is NOT a public forum.

This is a private forum, the virtual equivalent of our living room. Readers are invited into the room to enjoy tea and sarnies with their hosts. But if they become rowdy or pugnacious, they may be ejected. The judgment of whether ejection is necessary resides with Dymphna and myself, and no one else.

This is not censorship, because you remain free to establish your own blog and say what you wish to say there. In fact, one of tonight’s complainants already has his own blog (another Blogspot account, if I remember rightly), and he promptly published his comment as a post when I failed to approve it.

In other words, he had exactly the same freedom of speech that Dymphna and I enjoy. Same privileges, same platform. So how exactly was he “censored”?

Even if we failed in our attempt to avoid the wrath of Blogger, and Blogger were to shut us down, its action would not constitute “censorship”. This blog is hosted by a private commercial service, to whose terms we agreed when we opened our account. They may close our blog at their discretion, and that does not violate our right of free speech in any way.

For censorship to occur, we would have to be arrested and hauled into court by the government for voicing our opinions. That is the meaning of the word “censorship”.

To recapitulate the history of the issue: we have never allowed totally open, no-holds-barred commenting. Before we started moderating comments, Dymphna and I had a policy of deleting comments that violated our clearly-posted guidelines, but such comments were not removed until after they were posted.

Our motives for doing this were twofold: to enforce an atmosphere of civil discourse, which we feel enables a more productive exchange of ideas, and to avoid being sanctioned for the words of commenters who engage in incitement or other activities that violate Blogger’s terms of service.

After the Butcher of Utøya went on his murderous spree last July, the spotlight of scrutiny was directed at us in a way that had never occurred before. It quickly became clear that the Multicultural Left, with its allies in the media and government, was waiting for us to make a misstep. We experienced a surge of provocateurs, trolls, and other infiltrators, some of whom were obviously tasked with creating a casus belli in our comments section that would justify action against us.

As a result, we shut down comments for a time. Later in August we reopened them, but from then on they were moderated — every comment required pre-approval. This allows us to keep the comments of the trolls and the moles from ever seeing the light of day.

The new regime inspired a new rule: If we have to think more than thirty seconds about whether a comment should be approved, we delete it. Period. We rely on our intuition: if a comment seems hinky, it’s hinky — out it goes.

Does that irritate you? Very well, then; you are irritated. The stakes are high, and irritating a commenter here and there is inevitable. It’s an unfortunate side-effect of our current working environment.

I recommend that anyone who feels he is being “censored” by our failure to approve comments read the guidelines for commenters, as referred to in this blog’s comments form. You’ll see this reminder:


The most important thing to remember about the rules is this: The determination of whether any comment is in compliance is at the sole discretion of this blog’s owners.

This may seem unfair, but there is a good reason for the tightening of our standards. We are now under close scrutiny by hostile observers who are eager to find a pretext for shutting this blog down.

The consequences of a mistake are different for commenters than they are for the blog’s owners. You, the irritated commenter, may suffer the inconvenience of having your comment fail to appear here and be forced to post it at another site, or have it go unread.

We, on the other hand, face the possible closure of Gates of Vienna if the language appearing on our site is inappropriate. When our choice is between irritating a would-be commenter or having our blog closed, it’s no contest.

That was true last August, when the Breivik madness first descended upon us, and it’s true today. I’m very aware of the extent to which our writings are monitored. I have no intention of handing ammunition to those eager apparatchiks who would use it against us.

To refer to comment-screening as “censorship” debases the very currency of the English language. It’s like calling a cutback in NEA grants “the equivalent of the Holocaust”, or referring to Tea Party people carrying signs as “terrorists”. It makes certain words and phrases essentially meaningless.

After a while, the word “censorship” means no more than “I didn’t get my way! WAH-H-H-H!”

To those who say you have been “censored”: You have not. Your assertion is spurious.

Your speech is as free as mine. Go ahead and exercise it. The Internet is open to you.

We simply enforce our own rules, in our own forum.