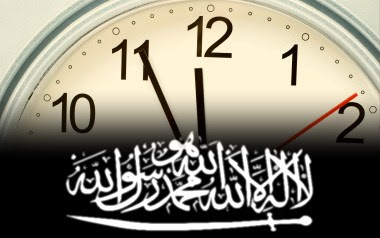 We reported last week on the reaction of Salafists to the display of Mohammed cartoons at a demonstration by Pro-NRW in Solingen, Germany. Last Saturday a similar demonstration was held in Bonn, and the reaction by Muslim counter-demonstrators was even more violent.

The following article is from Stars and Stripes, the official newspaper of the United States armed forces. Notice that it specifically and unequivocally labels Pro-NRW “neo-Nazi”. Pro-NRW (pro Nordrhein-Westfalen, Pro North Rhine-Westphalia) is no more neo-Nazi than Vlaams Belang or FPÖ. It is simply an unabashedly nationalist party that seeks to protect the rights of native Germans.

The article quotes a regional government official’s statement that the authorities will crack down equally on “both Pro NRW and the Salafists”. The implication is that the two sets of “extremists” are equivalent.

This essentially echoes the Charles Krauthammer/Bill Kristol view of Europe.

It’s further evidence that when the balloon goes up, the U.S. government will exert American diplomatic pressure and military power on behalf of “moderate” Muslims (and the EU) against the indigenous peoples of Europe.

By Ulrike Hofsaehs and Jean-Baptiste Piggin

BERLIN — A 25-year-old Islamist was remanded in custody in Germany on Monday, accused of the attempted murder of three policemen as they were separating neo-Nazis from Islamic fundamentalist protesters.

Two officers were stabbed in the thigh on Saturday and a third officer dodged an attack by the knife-wielding man during a melee outside a mosque in the western city of Bonn.

A larger group of 500 to 600 Salafists, who seek to impose what they say are the original doctrines of Islam, held a counter-demonstration, trying to break a police cordon.

The police made 109 arrests, and 29 officers were hurt in the Saturday clashes.

Hannelore Kraft, premier of North Rhine Westphalia state, told the mass circulation newspaper Bild, “We will not put up with attacks on our legal system, and our police and will come down hard on both Pro NRW and the Salafists.”

Prosecutors said the 25-year-old, who was born in Germany but has Turkish nationality, admitted to attacking the police but denied an intent to murder. He said he knifed the officers because they were protecting people insulting Muslims.

Prosecutor Robin Fassbender said the stabbings could have been fatal.

“If a major blood vessel had been punctured, the victim could have bled to death within minutes,” he said.

The Central Council of Muslims in Germany condemned both sides.

“We expressly dissociate ourselves from violent Muslims who urge lynch justice and attack the police,” general secretary Nurhan Soykan said in Cologne. She termed Pro NRW a hate group.

But a court cited free-speech grounds to quash a police ban on a similar demonstration by 15 Pro NRW activists Monday. Police said 400 mainly leftist counter-demonstrators yelled abuse at them in the city of Bielefeld without violence.

3 thoughts on “Saving Europe from the Neo-Nazis”