My thanks to two tipsters who sent in reports today regarding Muslim protests against the capture of several men who are charged with the chilling executions of five Macedonians — four teenagers and an adult — who were fishing in the Skopje area on Good Friday this year. That would have been April 6th. 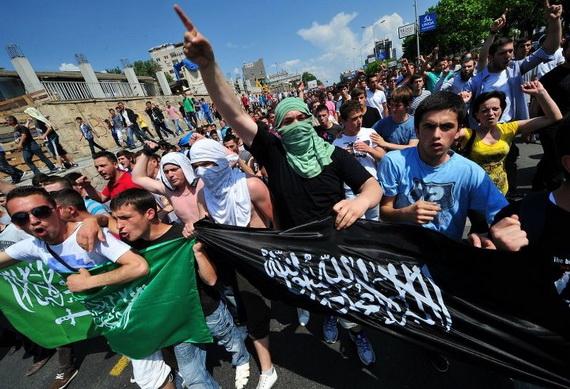 Here’s one version of the story from a reader named Dragan. He didn’t supply a URL, but perhaps our readers can find one; I’ll use in an update. He says the story is being ignored by the MSM. What else is new? —

Around 1,500 Muslims protested today in the Macedonian capital, Skopje, demanding the release of the radical Islamists who were arrested by the Macedonian police on May 2 for the cold-blooded execution of four Macedonian teenagers and one middle-aged man while they were fishing in the Skopje area on Good Friday this year. The arrests were made following an intensive 3 week investigation.

My heavens! They arrest “radical Islamists” in Macedonia?? Good on them. We only arrest “extremists”. Or maybe that word is outré now? It’s hard to keep up with the Gordian knots our betters keep tying around our tongues.

Macedonians are predominantly Christian, while the ethnic Albanian minority that accounts for around 20% of the population in Macedonia is predominantly Muslim. In the last decade there has been an increase in incidences of religious extremism, imported by radical Islamists from the Middle East, but this has not found a fertile ground among the Macedonian Albanians. Islamist terrorists cells have been reported all over south-easternEurope, including Macedonia.

I reported on this several years ago. Can you say Saudi? Petro money?

The Macedonian police assured that the protest and march through the streets didn’t take a chaotic turn. The radical Islamist protesters chanted “Allahu Akbar”, “Death to Christians”, “War on the Christians”, and brandished Al Qaeda insignias.

In other words, they did what these people do when more than two or three of them are gathered in Allah’s name. Blood lust satisfied only by numbers of dead bodies. It’s their form of prayer.

The Macedonian police have arrested three of five suspects directly implicated with the horrific crime, the likes of which Macedonia has not seen since WWII. [my emphasis — D] All the neighbouring countries have offered their support to the Macedonian Interior Ministry for the capture of the two remaining suspects, who are on the run and for whom Interpol warrants have already been issued.

The picture for this post, which Vlad Tepes kindly uploaded for me, was sent by yet another tipster. This time the jpg had a root which permitted me to open a page covering the story. The text accompanying the image was essentially the same as that first report so perhaps both originated at that site.

To make a bloody horror short: Dog bites man. Muslims kill Christians randomly on Christian holy days. Sadly, twas every thus. I pray for those mothers and wives who buried their beloved children in the week after Easter, as Christian and Jewish mothers have been doing since the Arabs swirled out of the desert.

[By the way, if the city Skopje sounds vaguely familiar to Americans, that may be due to its status as the birthplace of Mother Teresa.]

10 thoughts on “In Macedonia: Supporters of Killers Protest Arrest”