We’ve posted several times during the past few days (see here, here,
and here) about the fury that has erupted in Germany over the display of Mohammed cartoons by the immigration-critical group Pro-NRW.

The report below on the German cartoon crisis was originally published at Europe News. The original article has numerous additional images, and interested readers are encouraged to click the link to see them.

For the upcoming local elections in Nordrein-Westphalen, the small German political party Pro NRW decided to put the words of Joachim Gauck (now President of Germany) to the test. Back in September 2010, Joachim Gauck said, concerning the prize award to Kurt Westergaard for courage in the face of terrorism:

This prize is also an appeal to those carrying responsibility, be it in governments, in culture or in media: Be steadfast, protect our values and be COURAGEOUS, when irresponsible people and powers seek to relativize and undermine our values of freedom.

At the same event, German Chancellor Angela Merkel said: Freedom of religion does not mean that Shariah stands above the German constitution. … No cultural difference can justify the disregard for fundamental rights.

To try that in real life, Pro NRW applied for (and got) permissions to hold campaign events in front of various mosques and other Islamic institutions. At the events, candidates would hold the usual speeches about the need to uphold law and order, the importance of protecting democracy, the supremacy of the Constitution over Sharia and the like.

The real meat of their events was the showing of cartoons exposing the creeping Islamization of German and Western societies. The party had launched its own cartoon competition on the subject, and had a dozen entries. The winning image depicts huge minarets towering over an intimidated church: 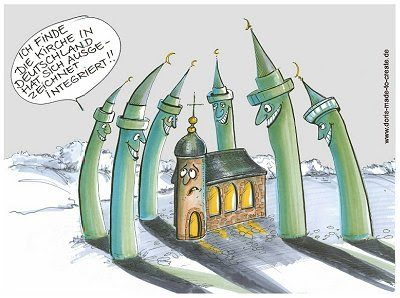 Winner of the Pro NRW Contest:
“The church has integrated nicely”


Another goes more directly into the issue of Islamic scripture legitimizing violence against those who do not believe in Islam or consider it holy:

The worst provocation, in the eye of the Islamists and the local government in North Rhine-Westphalia, was that Pro NRW also put the classical “Turban bomb” by Kurt Westergaard on display. That had provoked Muslims to riot heavily in Solingen and in Bonn, so police took absolutely no chances in Düren or in Cologne.

Noting the threat from violent Muslims, the North Rhine-Westphalia Minister of the Interior Ralf Jäger (Social Democrats) had tried to ban displaying the cartoons, in particular the iconic “Turban bomb”. German courts, however, upheld that freedom of expression cannot be set aside by the government, in particular not in the context of election campaigns. Thus the police did not get the somewhat unusual task of controlling what was said and shown in public, and stuck to the usual police work of protecting public order and preventing clashes.

Pro NRW held their last campaign events on May 8th, a date chosen to commemorate the liberation of Germany from the 1933-1945 National Socialist regime. The symbolism of this was lost on their opponents, who apparently believe that the only kind of patriotism possible is National Socialism. As thing stand today, the fear of National Socialism is all-pervasive, even though the ideology is hardly known or understood, and the easiest way to score cheap points in German politics is to depict your opponents as ‘Nazis’, their actual political views entirely irrelevant.

The first event took place in Düren, a town some 40 kilometers north of Cologne. Police were out in force, using police cars to cordon off the Pro NRW demonstration on a sidewalk. While this was good for the security of everyone involved, it left only a 1 meter margin for the demonstration to take place, and little space for any audience. Further, the row of police cars made sure the demonstration was largely invisible as well, preventing any audience from catching sight of the dangerous cartoons on display.

At the start of the Pro NRW event, representatives from the local Turkish community and the mosque approached Lars Seidenstecher of Pro NRW, and handed him flowers as an expression of the tolerance to those they disagree with. The Turkish representative also explained the regrettable situation of the German court permitting the display of the cartoons, and underlined that the Islamic community had no terrorist intentions or connections.

The event itself consisted of short speeches, an attempt to show the cartoons over the police cars lined up, and playing of the German national anthem. Interestingly, the Pro speakers quoted Kemal Atatürk for his outspoken contempt for Islam, a “rotten element” in Turkish society and a thing of the past. This “Food for thought” approach didn’t appease the counterdemonstrators down the street, their unwillingness to listen being clearly expressed in the noise they were creating.

The Pro NRW cars were escorted professionally from Düren to Cologne by the police.

In Cologne, the demonstration was to be held in a narrow street leading up to the giant mosque being erected there. The police had several layers of protection in place, including a water cannon vehicle strategically placed to stop any attackers breaking the first lines of defence.

A powerful public address system made sure that the speeches were very audible to everyone, and that a few shouting opponents couldn’t outpower the event as such. The local press was heavily present, and a few anti-Christian protesters were carrying blasphemous posters against Christianity, an act that is radically less risky than carrying banners against Islamization.

The speakers talked about the challenges of running election campaigns in face of attacks from Muslims and the threat of bans from the government. Susanne Winter of FPÖ (Austria) gave a 6 minute speech about the challenges of protecting European countries from Islamization. Given that she was convicted in Austrian courts for denigrating Islamic teachings, this is an issue she has first hand experience with.

Finally came the height of the event, the display of the cartoons. The press, which had not exactly been stepping back before, pushed yet harder to get images of the now famous images. A variety of comments were taken from Pro NRW representatives, as well as from members of the audience.

The event lasted an hour, after which the participants were escorted into safety by the police.

At previous Pro NRW events, various groups had tried to prevent them from proceeding with the somewhat alternative election campaign. Most notably, Salafists (Islamic fundamentalists) had assaulted a Pro NRW demonstration in Bonn, wounding 29 police officers in their attempt to protect the honour of Muhammad. The police, in turn, arrested more than a hundred Salafists in Bonn.

For the Cologne event, police banned another hundred from even entering the city. Although Internet Salafists had called upon their brothers in Islam (invoking Sura 61:3-4) to make May 8th the “Final Battle” of Islam versus secularism, absolutely nothing happened. Not a single Salafist was seen near the Pro NRW event, and nothing vaguely resembling a “Final Battle” took place. As Salafists said during the Bonn battle, violence might cost them their support among German politicians.

In Düren, the Piratenpartei, the Greens and others assembled under the flag of Turkey, training their reactions to a set of stock concepts: “Democracy”, “Human Rights”, “Pluralism”, “Rule of Law”, “Openness”, “Freedom of religion”, “Freedom of Opinion”, “Tolerance” and “Value of Humans”. Their expected response to the utterance of these words was simple: Deafening noise created with whatever pots, pans, sirens and other noise creating devices they had decided to bring to the streets.

A tiny splinter group from the main leftist demonstration was “HATE! HATE! HATE!” to disturb the Pro NRW event. But their “Hate speech” was gently terminated by the police, who escorted them away. Their provocation triggered no particular reactions.

In Cologne, police had parked water cannons in strategic positions in order to deal with any violent counterdemonstrators. With over a thousand police officers in the streets, the aggressive counterdemonstrations were kept soundly away from Pro NRW, thus no violence erupted.

A small group of protesters had taken a different approach, holding deeply blasphemous posters of Jesus at the Pro NRW demonstration, apparently seeking to provoke Pro NRW. Their somewhat noisy presence was tolerated by the police and Pro NRW representatives, who quietly commented that the protesters had no idea of the hugely different character traits and life stories of Jesus as compared to Muhammad.

While some where fighting in the streets, opponents of freedom also fought hard to deny Pro NRW an audience on the Internet. Their web site was hit hard by a Denial of Service attack, causing outage several days in a row. At the time of writing it is reachable again, as is Politically Incorrect, where the hackers even boasted of their criminal intentions on YouTube. Denial of Service attacks take a lot of effort (and possibly money) to keep going, and it would seem that the cybercriminals have exhausted themselves by now. Possibly they found that people simply read other quality blogs instead and abandoned their attempts to keep two web sites unavailable.

No matter what Pro NRW stands for in detail (National Socialists they are clearly not), it is disgraceful that German politics has degenerated to a point where heavy police protection is needed to let campaigning proceed without fear of violence. Also, local authorities clearly failed the “Gauck Test”, in that they did not stand for the right to show the cartoons as obvious and uncontestable. Apart from the repressive attempt to ban the cartoons, they also pointed fingers at “Unneeded provocations” rather than clamping down on the core problem: actual political violence.

The police handled physical security professionally, but hiding political campaigning behind lines of police cars is not a way to conduct political campaigning. It is only to be hoped that the radical forces will be strongly controlled and soon dispirited, that politicians in Germany can discuss matters of importance without having to fear for their physical security, and where “political participation” means more than street protests against points of view that are barely understood.

One positive side effect has come from this “Gauck Test”, however:

Radical Islamic groups have been exposed for their willingness to apply violence for their political aims. That should lead to relevant control of their activities, and to significantly more scrutiny to differentiate anti-Constitutional Islamic groups from moderate ones.