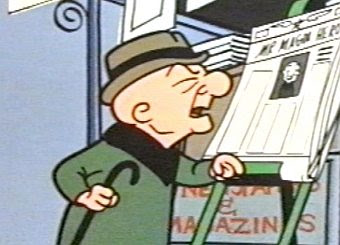 
As regular readers know all too well, we have a fund-raiser week every quarter of the year. These blegs have some theme or other — often a topic which has become umm…“topical” in the previous few weeks. The fundraising goes (usually) from one Tuesday to the next. The first day announces our theme; subsequent days each have a single Fundraising Post which deals — more or less — with the chosen theme (some days hewing a bit closer to this goal than others). Meanwhile, business goes on as usual. The news reports, cultural enrichment atrocities stories, guest essays, translations, videos, etc. appear as we’re given them or as whimsy dictates. We usually stay within the bounds of our mission statement but not always.

So. The First Day of the Fundraiser announces our theme. Subsequent daily Fundraiser posts expand on that theme. In addition, the dailies have a report on the various states and countries that showed up in the Donors’ Circle for the previous day. Everyone likes to check on the status of their own home place.

Sometimes we forget to make the Fundraiser Post of the Day more obvious to our readers. I mean, it’s obvious to us since we’ve been pondering it in the previous weeks, but our signal to you is rather low. A long-time reader in California wrote me the other day to thank us for our blog. As good as it is, he said, he also had the feeling we were Mr. Magoos when it came to monetizing our product.

I hadn’t though of him in years, but our California reader captured the essence of our problem: it is utterly essential to have our readers’ donations if we are to continue to keep the Gates of Vienna open. When the Baron went unemployed our advisor told us firmly that we had to fundraise and we had to do so consistently, once a month. We talked her down to once a quarter, and so it has remained ever since. Even after all this time and practice, though, we’re still not terribly adept. I have been known to write a Fundraiser post and neglect to mention fundraising at all. Yes, I did stick to the theme for that quarter, but it was as though I were expecting you to somehow apprehend the money part just by seeing the theme.

Dear me. The only thing wrong with our life as Magoos is that we’re not independently wealthy cartoon characters like Mr. M. However, the Baron’s computer eyesight resembles the original Magoo more closely every year. And he continues to display that benign optimism which first attracted me.

So this is Day One of the Second Quarter’s Fundraiser and we are asking that you donate whatever you can afford to keep this project going. We get by with a lot of help from our readers.

When we sat down to talk about this Fundraiser the idea of diversity came quickly to mind.

I mean both real diversity in the true sense of that word and also the sadly more usual faux diversity which currently hampers and restricts the thinking of many otherwise rational people.

Remember those horror stories about the ancient Chinese custom of binding women’s feet to make them more eligible for the marriage market? The p.c. forms of diversity are like that: they bind and constrict the minds of the intelligentsia in order to make them marketable. What use intelligence if no one will hire you because you think wrong thoughts? Besides, political correctness is a virtue in and of itself. If “everybody knows” then there is no need to bother your pretty little head about some thorny issue; the subject is “settled”. Consensus has arrived; the tedious bother of having to unpack all your ideas and rummage through them to find something suitable can be safely jettisoned.

Not living with Consensus makes the pee cee folks uneasy. Whatever will they think about a given subject if there is no one to tell them what they should be thinking? It’s so much easier to be told by the experts than it is to go to all the bother of figuring out what might be a possible alternative, or even to be told there might be several possible ‘cases’ and it needs more discussion, more investigation.

In Pee Cee World, Hell is just another name for ambiguity.

Diversity as defined by the Left is deterministic (and they are in charge of those determinations). The contents are what they have decided the contents will be and — above all — the subject is closed to further discussion, especially public discussion by those not accepted into the Guild of Experts.

On the other hand, Diversity as defined by those who Think Differently is a more robust procedure. It’s often messy, ambiguous, and open-ended. But is sure is more fun. Often, the subject is left unfinished, left for those who come after to do more investigating.

What got us to this quarter’s theme? Why those lovely folks in Norway, those Deep Thinkers who are certain you’re all cretins. Remember them? The Klassekampen Kids, Andreas Malm and Tor Bach? Their summation of your education, erudition, marital state, and economic status was risible and wrong. Their grand analysis was far distant from the True North I see in your emails, your comments, and your guest posts. Their summary judgments made me see again how much the Left has grown to resemble the medieval Church, where the truth passed at great risk and only in whispers. No doubt this orthodoxy of the Left will soon crack under the same pressures which blew the Church apart.

Examining the smithereens will be instructive for those of us who are left to collect them.

Okay. The demographic data from the KK claimed you were ill-educated. But your responses included numerous readers with post-graduate degrees and accomplishments in several languages. Lots of science education, but then the hard sciences often track with conservative or independent politics of varying hues. And despite the stereotypes regarding doctors, engineers, physicists, etc., there were as many religious believers as there were atheists. Just like real life, not many signed up for the agnostic category.

Many of you reported marriages of long standing with children and grandchildren. There are also readers without children, of course, and some without mates. No one said they were unhappy with the way things had turned out, and obviously marriage and/or children are not for everyone. However, in sum, GoV readers are a fertile bunch, and this is just what David Goldman says we need to survive as a culture.

How Civilizations Die: (And Why Islam Is Dying Too)

I don’t agree entirely with his analysis or summation, but it’s a heck of a lot closer than what the KK claim.

Many of you mentioned your economic status, and some of you appear to be among Obama’s despised one percent. His depth of innumeracy and his ignorance regarding the basic factors in wealth creation allow Obama the easy out: grandstanding in order to arouse voters’ envy of the wealthy. In reality, a large base of wealthy citizenry is the best antidote to economic uncertainty for the rest of us and for prosperity as a nation. Obama is deeply lacking in integrity when he incites envy even as he enriches himself without ever creating or producing anything. Those divisive tactics in the name of vote-grabbing have done our commonweal great harm which will not easily heal even after he is mercifully gone.

At any rate, we have a deep bench in the business class amongst our readers and that reassures me. More than one fellow claimed education that ended at the high school level but who went on to create thriving businesses which in turn employ other people. If there is one thing we need to stop doing it is processing more government workers through our corrupt diploma mills. What our world wants is more mechanics and plumbers and jacks-of-all-trades. Things fall apart and there is a growing shortage of folks to fix them.

The Baron made a chart for me so I could easily read all the responses. I was going to quote some of you — the funny, the moving, the amazing — but in the end it seemed that “Anonymous” is there for a reason. You risked exposing your lives and you need protection from the grasping Klassekampen Kids. I will tell you, however, that I’ve kept the chart and I read it when I’m feeling down. It never fails to move me, and often it moves me to tears as the wonder of your variety sinks in. There is a kind of grace in the summation of those pages of lives.

The old aphorism about an ill wind is certainly proved true here. The hate-filled demagoguery is overshadowed by the depth of our readers’ lives. Thank you for telling us.

As usual, the Baron will follow tomorrow with Day Two of the Fundraiser. And I’m contemplating the content of Day Three. Exposing socialists is like shooting fish in a barrel — I’ll attempt something more positive…something that goes against the grain of what “Everybody Knows”…

2 thoughts on “A Diversity Diversion”