We’ve posted about the German author Necla Kelek several times over the past few years. Ms. Kelek is a practicing Muslim of Turkish extraction. She is also one of those rare birds: a truly “moderate” Muslim who is educated, tolerant, and has assimilated to German values. She refuses to acknowledge the ascendancy of the Islamic fundamentalist movements that are now sweeping the Middle East and Europe.

The following article was prompted by the proposal by a group of German Salafists to give away 25 million copies of a German-language Koran. Many thanks to JLH for translating Ms. Kelek’s piece from Frankfurter Allegemeine Zeitung, via Europe News.

The Influence of the Salafists: Democracy Is the Opposite of Islam
by Necla Kelek

The philosophy of the Salafists is as old as time — older than the pedestrian zones where they are passing out the Koran. They are making it easy on themselves there: their political program is an intensification of heaven and hell.

I was in Tunis in January of this year to speak with women about heir situation after the revolution. The great provocation locally was the occupation of Manouba University by Salafists. On the campus of the linguistic faculty, outside the city and lined with orange trees, about 8,000 young people are educated as language teachers. 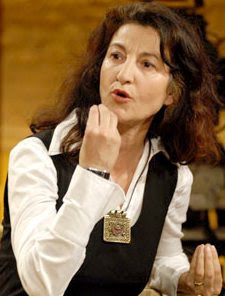 On the way there, we encountered several female students wearing head-scarves and niqabs, who had not been able to study for six weeks because teaching had been halted on account of the occupation. They sympathized with the occupiers but were afraid that their year of study would not be recognized.

The rector had been locked in his office by the demonstrators. Since no one had helped him, he abruptly halted teaching in November. I expected a large group of occupiers. But as we came onto campus on January 5th, neither students nor demonstrators, nor even police were to be seen. The young women led us the rectorate — a one-story building. Six young men were sitting on their sleeping bags in the foyer in front of the rector’s office. These were the occupiers.

Is the niqab/burqa a part of this?

I asked what they were aiming for with their action. “We want our women,” said the speaker, “ to study according to the rules of our religion.”

“They must be allowed to study and take exams in Islamic clothing.”

“Yes, that is the clothing Islam prescribes for us.”

“But then no one can know who is sitting across the table,” I objected, in order to express the practical problems of identification in examinations.

“The burqa is allowed in Oxford,” the speaker answered. “We claim protection of minorities. It is our freedom. The time of oppression is past.”

A placard in the foyer showing a covered woman proclaimed: “You cannot free me if you take away my rights.” The Islamists feel emancipated, because they were persecuted under Ben Ali and now are not under any control. They speak of dignity and say that Western freedom is only caprice and corruption.

As proof, they invoke their piety and poverty. They say their religion is true-to-the-word Islam and its law is sharia. They interpret this as Allah’s commandment which is made over human beings, as are also the Islamic principle of vengeance, family law and Islamic criminal law.

The caricature of a religion

Scene change: According to a report by CBN, the population in Brussels in 2030 will be majority Muslim. Already today, a Salafist group called “Sharia4Belgium” is agitating for the introduction of Islamic regulations. Their spokesperson, Abu Imran states openly what the group is about: “Democracy is the opposite of Islam. Allah says what is allowed and what is forbidden.”

Further: “A democratic Muslim is as absurd as imagining Christian Jews.” In such interpretations, the Salafists are fundamentally distinguished from other Muslims and moderate Islamic parties, which to be sure want sharia, but not as a judicial category. The Salafists falsify Islam by reducing it to an ideology in which absolute obedience is demanded of the believer. The seventh-century outlook of these simplifiers is a caricature of a world religion. The intensified emphasis on the question of heaven or hell is their political program,

Those passing out Korans in German pedestrian zones are arguing according to this simple model. So we should not take it too lightly and assume that all this is happening coincidentally and the initiator of the action is a “lone wolf”. I have encountered the same standard arguments in my travels in Luxor, Kairouan or Marrakesh. As if all of them had attended the same Koran school in Riyadh.

Religious freedom and freedom of expression

Everywhere and with partial success, the petrodollar-financed Salafists are attempting to implement their strategy, to occupy public squares, to be perceived as freedom fighters, apostles of morality and true believers. In Egypt, “the party of light.” as they call themselves there, elected almost 30% of the parliament; in Tunisia they are occupying University Street and mosques and are preaching in parliament; in Marrakesh, they are racing through the Medina on mopeds shouting “Allahu Akhbar”; and here [Europe] they are praying in public and on Youtube.

Seen theologically, these Islamists are a medieval joke — sanctimonious hypocrites. Visually, rather more Islamic punks with a kepi and a scraggly beard and to be taken as seriously as the [mythica] black ram. Reactionaries seldom shine by their intellectual accomplishments, but mostly by aggression, chutzpah and a plain, ahistoric friend-or-foe philosophy.

How do the local media and public react? At first, helplessly. The news of the day shows older women receiving books from friendly men in knit kepis. The word spreads of allegedly 25 million free copies of the Koran to be given out. The politicians ponder religious freedom vs. freedom of expression and hope that nothing will happen. Sharia must not apply as family law.

“There is no doubt about the importance for everyone of reading the Koran,” declares the coordinating council of Muslims (KRM) about the Koran distribution action. One would hope that the holy book is not being “instrumentalized.” Ali Kizilkaya,, speaker of the KRM, sees “no reason for unease” and the general secretary of the Muslim Central Council, Ayman Mayzek, considers the distribution of the Korans a “basically promising act” and supports this with the wisdom which is inherent to the Koran and the invitation to dialogue. No outrage at and barely any indication of the anti-democratic goals of these sectarians, no confrontation of their religious fervor, but only the concern about a further “irksome area of discussion.”

The picture of Islam can only be improved if Muslims and their organizations defend religious freedom against such an abuse. If they lay claim to democratic rights for not only their own protection. Part of that is publicly distancing themselves from the political ideology of the Islamists. The Muslims themselves must peer into their religion’s heart of darkness occupied by the fundamentalists and terrorists and position themselves as protective democrats.

They could, for example, demonstrate with an announcement this week at the Islam conference that they reject the Salafist interpretation; that sharia must not be valid as criminal and family law; and that the danger of fundamentalism lurks in their own ranks.

3 thoughts on “The Influence of the Salafists”