Back in February we posted about a apostate from Islam in Spain named Imran Firasat who has petitioned the Spanish government to ban the Koran.

Mr. Firasat has just learned that his petition has been formally accepted by the Spanish parliament. Below is the report from today’s Minuto Digital. Many thanks to our Spanish correspondent Hermes for the translation:

Imran Firasat, a Pakistani national with legal residence in Spain as a political refugee, has accomplished what at first seemed impossible: his petition to ban the Koran in Spain will be discussed in the Constitutional Committee of the Spanish Congress, as shown by the document displayed above, which is reproduced exclusively here at the Minuto Digital website.

Coincidentally, we received an email this afternoon from the petitioner, Imran Firasat. He sent a photocopy of the official acceptance of his petition, and included this note:

This is Imran Firasat (A Pakistani ex Muslim residing in Spain). I hope you still remember me. I am the one who some weeks ago lodged a formal petition with the Spanish government for prohibition of the Quran in Spain. Today I get back to you again with the fantastic news that my petition has been admitted successfully in the parliament of Spain and has been sent to the next level.

When I lodged the petition, many Muslims sent me the messages calling me stupid and commenting that the Government of Spain is “not going to entertain your petition and they will tear it up and throw it away”.

Well, the good news is that I have received a letter from the Parliament of Spain, in which they informed me that they have admitted my petition and sent to the “Constitutional Commission” of the Parliament: 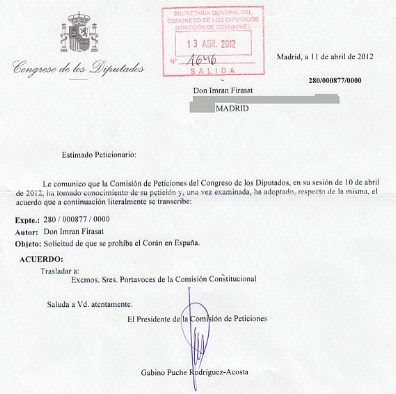 Even though it is still not a formal prohibition of the Quran, it is still a big success for us. At least the fight against the violent Quran is going to the next level. Actually, I suspected that the Spanish government would never reply to my petition, or that they might ignore it because of not wanting to have conflict with Muslims. But salutations and ovations to the Spanish parliament that they took this matter seriously admitted the petition and sent it to the Constitutional Commission.

It is an encouraging news for all of us who want to get rid of Quran, Islam, Muhammad and Sharia. And it is also an example for the world that nothing is out of reach, if we wage an intelligent and hard fight. The admission of my petition in Parliament encourages me and propels me to do much more against the spreading Islamism. That is why soon I am going to lodge more petitions in Spanish Supreme Court and European tribunal. Let’s have a face-to-face fight with Muhammad (The self-claimed but fake prophet).

As an attachment to this e mail, I send you the scan of the letter which I have received from the Spanish Parliament. Also, here are some links to Spanish newspapers which have published this good news today:

Thank you very much for your co-operation

Hermes has kindly translated the text of the official acceptance of Mr. Firasat’s petition:

I inform you that the Requests Commission of the Congress of Deputies has taken notice of your petition in its session of April 10 of 2012 and, after examining it, has arranged for it the agreement literally reproduced below:

Subject: Request to ban the Koran in Spain

Pass on to His Excellencies the Spokespersons of the constitutional commission.

Chairman of the commission of requests

14 thoughts on “A Petition to Ban the Koran in Spain”