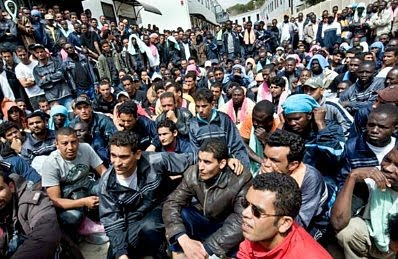 Readers in D.C. or the wretched hive of scum and villainy Northern Virginia may want to schedule a little excursion to Arlington on May 1. That’s the day the State Department will huddle with leading representatives of the Refugee Industry to plan how many more Third-Worlders will be invited in to enrich American culture next year.

When we hear the word “refugee”, we tend to think of “your tired, your poor, your huddled masses yearning to breathe free”. That image, however — the earnest but impoverished foreigner, lined up along with hundreds of others on Ellis Island eager to work hard for a pittance to make a new life in America — is at least a hundred years out of date.

The typical “wretched refuse” of the 21st century is an illiterate from a backward and barbaric Third World despotism, usually a Muslim one. He’s eager to make a new life in the land of milk and lavish welfare benefits.

An entire industry has been built around the “refugee” process, because big money can be made by the well-connected symbiotes of the federal government inhabiting the public-private penumbra that surrounds the American immigration bureaucracy.

Ann Corcoran at Refugee Resettlement Watch is encouraging everyone to take note of the details and make their presence known at the public meeting on May 1:

State Department refugee meeting: Your chance to voice your opinion!

Every year the US State Department holds a meeting/hearing to learn what US citizens are thinking about the refugee resettlement program and so they can ‘help’ the President determine how many refugees we will take in the next fiscal year.

The meeting is dominated by federal contractors (LOL! they call them “voluntary agencies”) who stream in and ask for more refugees. In past years few citizens or local elected officials have questioned the notion that the US can take in more impoverished immigrants from the world’s political hot spots.

This is your chance! Either sign up to attend the hearing or send your comments. Here is the Federal Register notice. Note that they are specifically disallowing video taping of the proceedings because they don’t want large numbers of taxpayers to see the parade of contractors with their hands out!

There will be a meeting on the President’s FY 2013 U.S. Refugee Admissions Program on Tuesday, May 1, 2012 from 2 p.m. to 4 p.m. The meeting will be held at the Refugee Processing Center, 1401 Wilson Boulevard, Suite 1100, Arlington, Virginia. The meeting’s purpose is to hear the views of attendees on the appropriate size and scope of the FY 2013 U.S. Refugee Admissions Program.

The use of any video or audio recording device, photographing device, or any other electronic or mechanical device designed for similar purposes is prohibited at Tuesday’s event.

Keep an eye on Refugee Resettlement Watch between now and May Day — Ann has promised to keep us updated on this meeting.

11 thoughts on “The Federal Refugee Industry”