An article in this morning’s Sunday Times about female genital mutilation in the UK has been much discussed today in Britain. Our English correspondent Seneca III presents a summary of the article, and adds his own thoughts on the whole sordid matter. 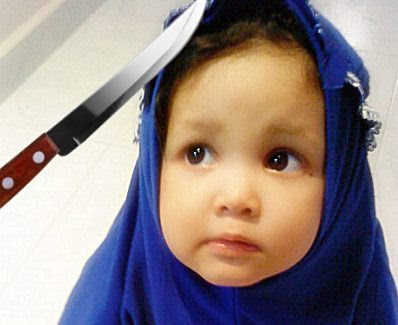 100,000 Genitally Mutilated Girl Children in Britain — And More to Come

The leading article in today’s Sunday Times is a story of more cultural enrichment. Essentially, it reports on an undercover investigation into the extent of female genital mutilation (FGM) in Britain.

And, as ‘thetimesonline.com’ is behind a subscription firewall and cannot be linked, here follows a short review/synopsis with some comments from me connecting the quotations and elaborating in a politically incorrect manner in a couple of places (direct quotations from the ST are in italics).

Forward, a charity that campaigns against FGM, revealed this weekend that 100,000 women in Britain have undergone mutilation. A further 24,000* girls are thought to be at risk of suffering the agonising procedure**.

Such acts which are widespread in parts of Africa*** and the Middle East are illegal in Britain.

* Estimates place the worldwide figure at 140 million — guess where most of them are (apart from those now setting up their occupied territories in Europe and the USA)?

** I will include no details here. It is Sunday, and even after so many years of exposure to the ideological root causes of this atrocity, those years have still have not inured me to the horrors of this and all the other joys of Sharia.

Despite the scale of the problem, the police have failed to secure a single conviction. This weekend, as campaigners called for crackdown, police were accused of failing to pursue prosecutions for fear of inflaming racial tensions. (My bold)…

…The Metropolitan Police having received 166 complaints of FGM since 2008 but, as with all 43 forces across England and Wales, having secured no convictions. (sic)…

…Waris Dirie, a former model who was mutilated as a child and is now a United Nations Ambassador for the abolition of the practice, said: “If a white girl is abused, the police come and break down the door. If a black girl is mutilated, nobody takes care of her. This is what I call racism.”

(Well, yes, Waris, but ‘self-inflicted reverse racism’ would be a better description as the police wouldn’t be afraid to help you if the race card were not played without fail every time a non-white is arrested on suspicion of a criminal offence — do try to get your head around the [race] incident/hate laws and the Orwellian definition of them as constructed by the Association of Chief Police Officers (ACPO)…

“Any incident, which may or may not constitute a criminal offence, which is perceived by the victim or any other person, as being motivated by prejudice or hate.” [is a hate incident]

“Any hate incident, which may or may not constitute a criminal offence, which is perceived by the victim or any other person, as being motivated by prejudice or hate.” [is a hate crime]

…and perhaps you will begin to understand why the poor bloody coppers on the ground who have to do the actual dirty work are more than a little reluctant to risk their careers and livelihoods by in any way interfering in even the nastiest cultural habits of non-whites. What you sow is what you reap.)

Inside the newspaper on pages 10 and 11 is a full-length article describing the investigation and which named, with photographs, three of the practitioners of FGM.

Hence hereunder are some of their responses when approached by a female undercover reporter who first paid a £60 consultation fee to a medical practitioner to ask if he could arrange for two girls, aged 10 and 13, to be circumcised. Dr. Ali Mayo-Aways, who runs a private clinic in Birmingham, replied thus:

“Yes, I can help you. I have a doctor that will do [it]. He is here in Birmingham. I will give him a call… I can help you but this one is very dangerous”*

(*For him or the girls, I wonder, but doubtless the former consideration was uppermost in his mind.)

Dear Dr. Ali then gave the reporter the contact details of one Omar Sheikh Mohamed Addow, a Somali-born Dentist! Who, reluctant when first contacted until later he realised that the reporter had been sent by Dr. Mayo-Aways, is reported to have shown the reporter the medical clamps and scissors he would use and said…

The third person exposed by the ST, in Barking, East London was one Mohammed Sahib, a Faith Healer…

Mohammed Sahib, wearing flowing robes and a white prayer cap, ushered another (male) undercover reporter into his dimly lit bedroom and when offered the same two children under the guise of the reporter pretending to speak on behalf of a Ghanaian couple and replied…

Obviously the actual article went on in far greater detail and depth than can be commented upon in this short review. Furthermore I have chosen to spare GoV readers the worst of the gory, clinical and inhuman details, but I wish to emphasise that this article and the work that went into it constitute an excellent piece of open journalism, rare these days when the MSM is usually so reticent in detailing the politically incorrect realities that contradict the picture of the Marxist/Islamofascist conquest as is normally peddled by our political and chattering classes.

The Sunday Times is to be commended, although I doubt if they will be happy to be so appreciated by the likes of me as. Getting better though they are, they are not fully healed, not by a long way yet.

However, from my non-blinkered perspective, here, soon, in a street next to all of us, is coming yet another gift from The Religion of Atrocity, Death and Slavery, all to the greater glory of enforced Multiculturalism (not).

I will leave it to the Baron to work out the Mohammed Coefficient, I’m going for a late lunchtime pint.

6 thoughts on “A Gift from the Religion of Atrocity”